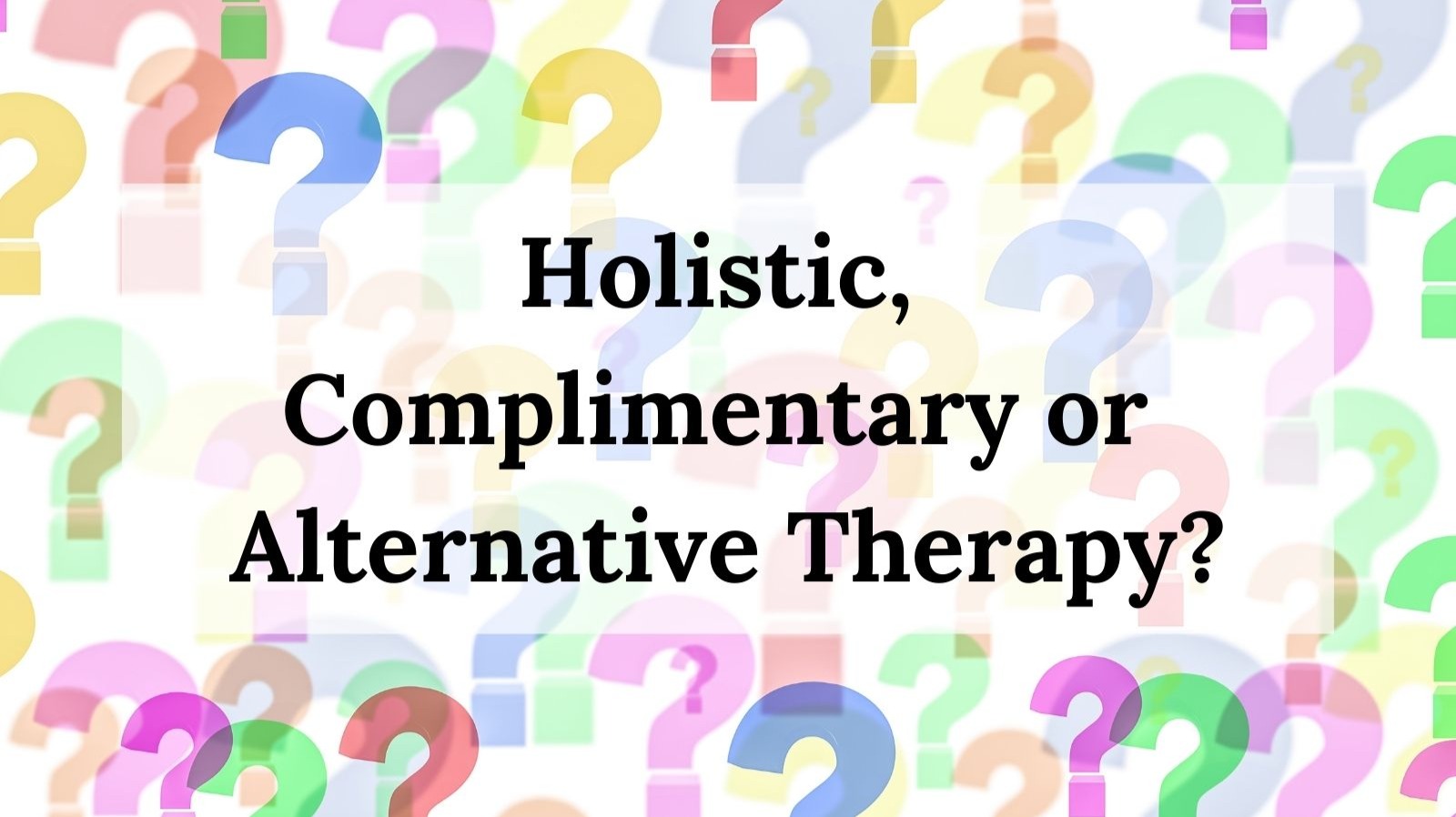 As many people are looking for more holistic ways to take care of themselves and their wellbeing, I wanted to address a question that often comes up when you start researching the alternative therapy world!

It can be confusing at first, because there is so much choice! So I want to explain the differences between Holistic therapies, Complimentary therapies and Alternative therapies.

These terms are often used interchangeably, but they don't actually mean the same thing.

The fields absolutely do overlap quite a lot, but there are differences that I'll cover below.

A word about 'Therapies'

First off, I just want to quickly address what is meant by the word therapy or therapies in this context. It seems to be becoming fashionable to use the North American meaning of "therapist" right now, to indicate a counsellor, psychotherapist or psychiatrist, and just want to clarify that is not what is meant here! Therapies in this context describes a wide range of different treatments, sessions and techniques that may have a therapeutic value in some way shape or form.

This conversation is not just about mental health, although many holistic, complimentary and alternative therapies may have a positive impact on the psyche and overall mental and emotional wellbeing.

What are Holistic Therapies?

The word holistic means "whole" so simply put, holistic therapies are techniques, treatments or sessions that aim to treat the whole person, to help balance, heal or boost the whole of you, not just treat or help a particular body part, an illness, injury or one aspect of your being. They work on the physical body, but also the emotional, mental and spiritual planes too.

The holistic approach to wellbeing takes into account that we are multi-faceted beings, and that no ailment, illness or dis-ease exists in a vacuum, and as such the belief is that you will get the best overall results for your wellbeing, particularly on the longer term, by treating the whole person rather than just focussing on an ailment or body part.

Holistic therapy is also preventative, in so far as it aims to keep your whole being in balance and harmony, which is believed may reduce the overall risk of dis-ease, illness, injury and also boost happiness and wellness.

A good example of a holistic therapy is Reiki. Reiki works on all elements of the person being treated, and works to boost your lifeforce energy and bring your whole being into harmony and balance, this includes the physical, emotional, mental and spiritual aspects too, and can even positively influence your karma.

This is a very different approach to the one we are most used to here in the Western world, where we tend to treat ailments and injuries as one offs or as separate to our whole being. The holistic approach believes that each dis-ease or injury is just an indication or flashing warning light that there is an imbalance within the whole body, mind, soul energy system itself, so seeks to redress that balance in the whole system, rather than simply cure the symptom or "put out the warning light!"

As the name suggests, complimentary therapies are intended to work alongside other treatments such as regular allopathic medicine or other systems of healing. These can be very helpful to enhance your wellbeing in your day to day life, but also to assist you in times of illness or recovery from injury. Most holistic therapies are also complimentary therapies, so you will often see the two terms mixed up.

All of the therapies that we offer here at Angel Wings Holistics are what would be classified as 'complimentary therapies' because they are not intended as a specific 'cure' but can be used alongside other treatments if needed.

A good example of a complimentary therapy would be Angelic Healing, as this could be carried out to help support you on many different levels while undergoing allopathic medical treatment, and is also believed to be able to help minimise side effects from traditional medicine, speed up the healing process overall, and provide emotional support which could help to support you on your healing journey.

Alternative therapy is an umbrella terms for any treatment or therapy that fall outside of the mainstream, usually to indicate that it is not allopathic medicine, but some alternative. I hesitate to use the word non-traditional here, because many alternative therapies such as acupuncture or herbalism have actually been around for much longer than our current modern medicine, so some may be considered to be traditional in many parts of the world such as China or Tibet.

Alternative therapies can include treatments that provide a cure, non-pharmaceutical medicines or treatments that you would not normally be able to receive from your regular doctor or GP. Chiropractors and osteopaths are technically classified as alternative therapy practitioners. Another good example is Indian Head Massage which is known to help with issues such as migraines, tension, stress and other physical ailments, but is not currently available from the NHS or regular mainstream doctors yet, although it may have proven to be effective.

Many alternative therapies are starting to come into the consciousness of doctors, and some surgeries are now bringing in alternative practitioners to work alongside their medical staff. Long may this continue!

I hope that helps to clarify these three terms for you and sheds some light of what is meant when we talk about holistic, alternative or complimentary therapies or treatments.

Many of the therapies we offer here at Angel Wings Holistics actually fall into 2 or 3 of the above categories, but we choose to refer to them all as just 'Holistic Therapies' to keep it simple, because they all are!

Please do let me know which your favourite holistic, alternative or complimentary therapies are, and do get in touch if you are currently navigating the vast and sometimes confusing world of holistic therapy - I'll be happy to guide you!