Three incredible projects that can be highly valued 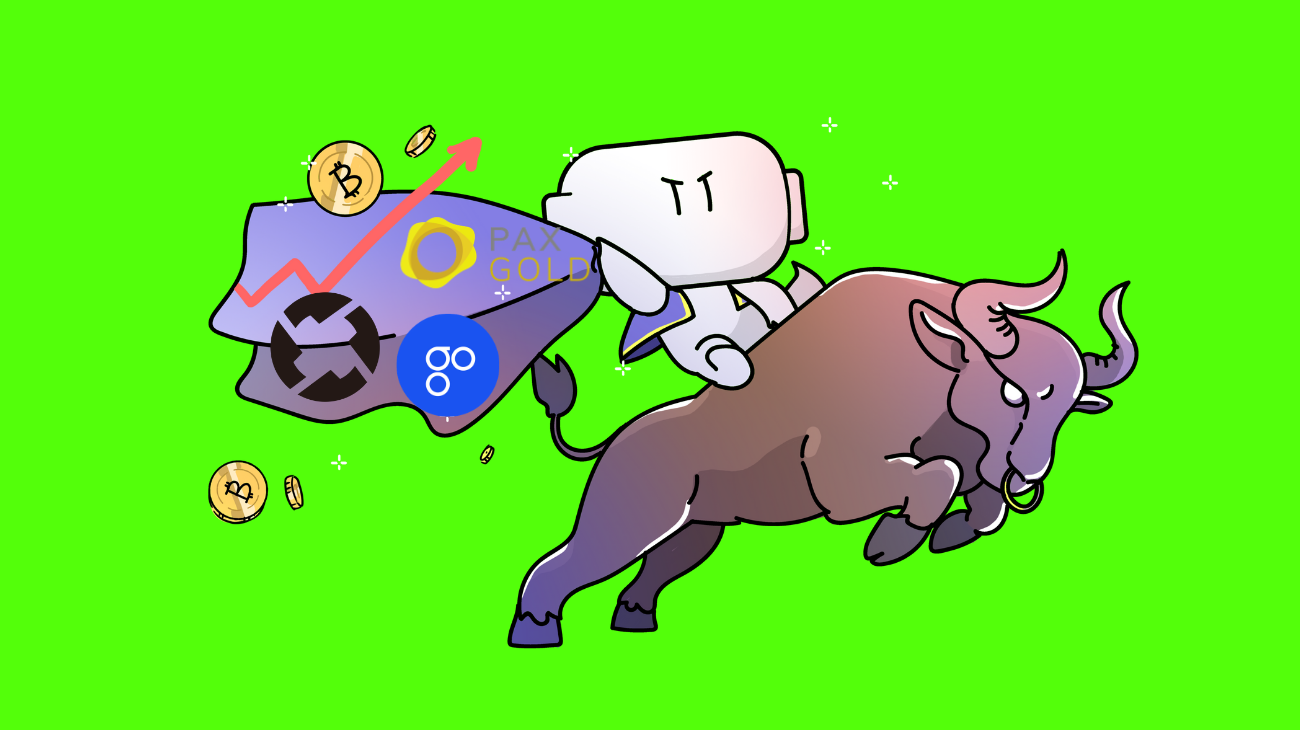 Three incredible projects that can be highly valued

On November 1, 2019 I shared my price projection for the cryptocurrency Chainlink [Link], in that period the price of the currency was $ 2.69 and I projected that it would hit the $ 13, now at the $ 19 project that the end of the cycle will take place in $ 30, however that is not the purpose of this article, here I intend to share three other projects that I believe have prices below the value that they should have or that have great potential for appreciation, as well as a price analysis, to see what the graphics on us say about them.

Recalling that I intend to bring only the most relevant information about the projects and their TA's, to know detail by detail I recommend that you do your individual research, read the Whitepapers so that you can decide whether or not to place such projects in your portfolio.

Oh my god or OmiseGo is a Proof-of-stake (PoS) platform based on Ethereum that is dedicated to the decentralization of payment networks and the creation of an open public financial system. Its objective is to provide the solution to the fundamental problem of coordination between payment processors, financial institutions and gateways. OmiseGo's platform was designed to redefine the current system, providing a highly scalable DEX (ODEX) that will serve as an infrastructure for multiple markets to connect and interact with each other, maintaining resistance to censorship, transparency, security and liquidity. As an extension of the Omise company, OmiseGo already has relationships with numerous companies that are leaders in their field, such as MC Donald's, Alipay, SBI Investment and Golden Gate Ventures.

OmiseGo is a reasonably complex platform with many moving parts, so to understand how the underlying technology works, you need to study the Decentralized Exchange Protocol ODEX, the Stake Consensus Proof, the Plasma Network and the White-Label Software SDK Wallet , but I will leave this part to you, as stated earlier, I do not intend to go into technical details here.

The project's past left something to be desired, as it was an extremely ambitious project, there were some delays in its roadmap, which left investors very frustrated and (perhaps) this caused the great price devaluation we have in relation to its ICO, currently the graphics we were shown a very high buyer volume in the OMG price, which may mean the resumption of the price in the project, so we started for the graphical analysis. 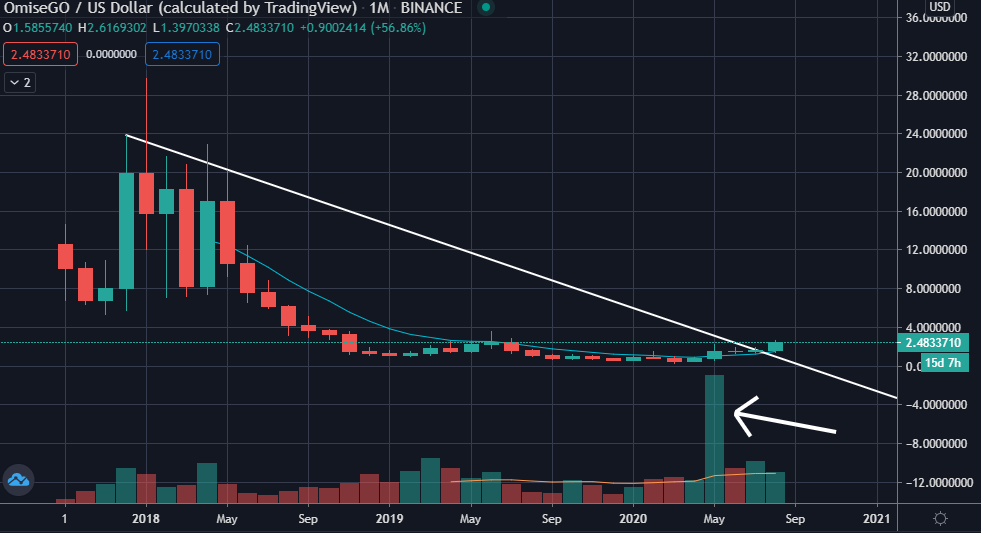 Initially on the monthly chart it is possible to see an immense volume that is almost 3x greater than the largest volume previously observed, the top of this month's candle can be considered a very important support going forward. Other than that we had a break in the downtrend line that was drawn in white, the volume of the break is exactly over the moving average of the last 21 days, as we still have two weeks to the end of the month I consider that the possibility of being a false disruption is low. 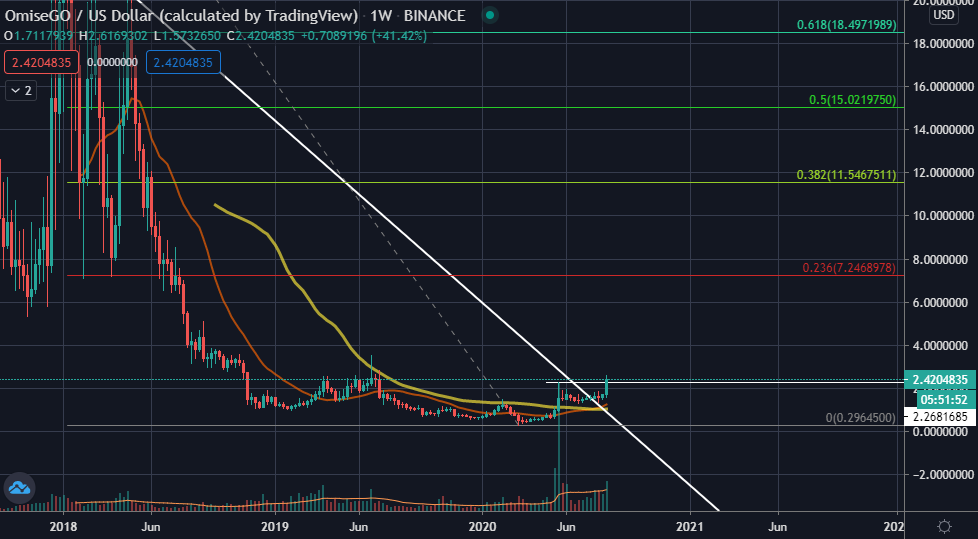 In the weekly I traced the fibo from the highest to the lowest point of the graph to get a sense of the possible stopping points in the macro scenario, we can see that the 0.236 point which is positioned at $ 7.24 has been supported a few times in the past and is possibly the next stopping point. In addition, the price has managed to break with conviction and remains above the 50-period moving average. In addition, we have a positive crossover of the average of 21 periods over that of 50, which means that the last 21 days have been more optimistic than the last 50. If the price really starts a small bull run to the point of 0.236 fibo we would have a return of approximately 215%. 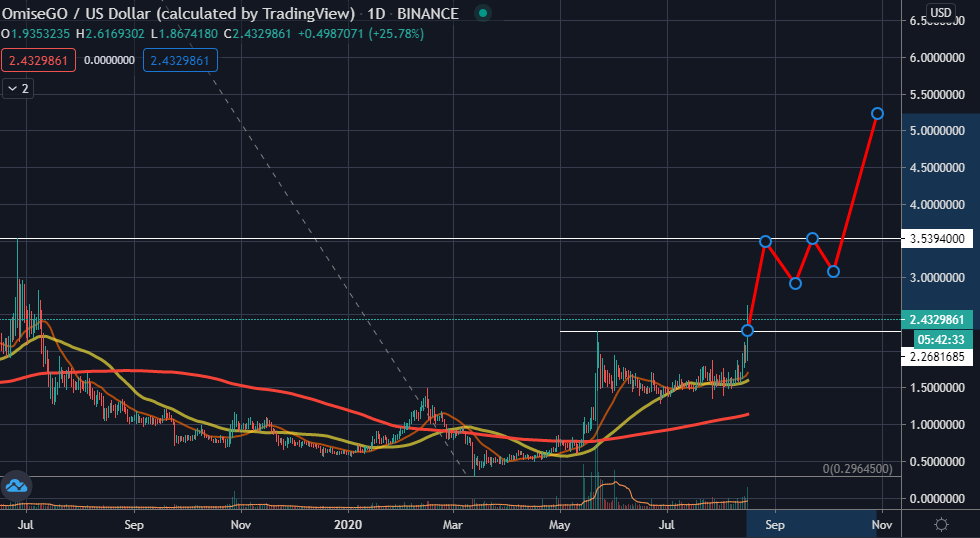 In the diary we have the last relevant stopping point marked at $ 3.50, an interesting move that can be projected for the price would be something like the one drawn in red on the chart or even a re-test at 2.26 before the continuation of the trend to the zone mentioned above.

Do you believe in the potential of gold? Pax Gold is an ERC stablecoin that runs on Ethereum's blockchain, it is a token fully backed by physical gold that is kept in Brink's company vaults. As I believe that everyone knows gold there is no reason to talk about it, let's go to TA. 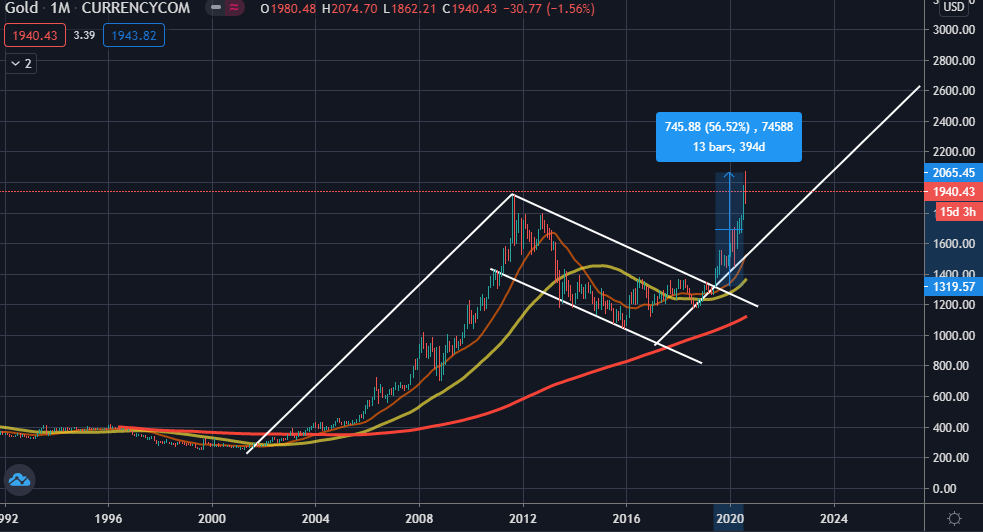 The gold monthly made a flag that was broken and is currently delivering 57% to those who broke it, but as can be seen in the graph, the price broke the historic maximum without strength to continue the movement and is coming back to test the same, and can be another great buying opportunity. 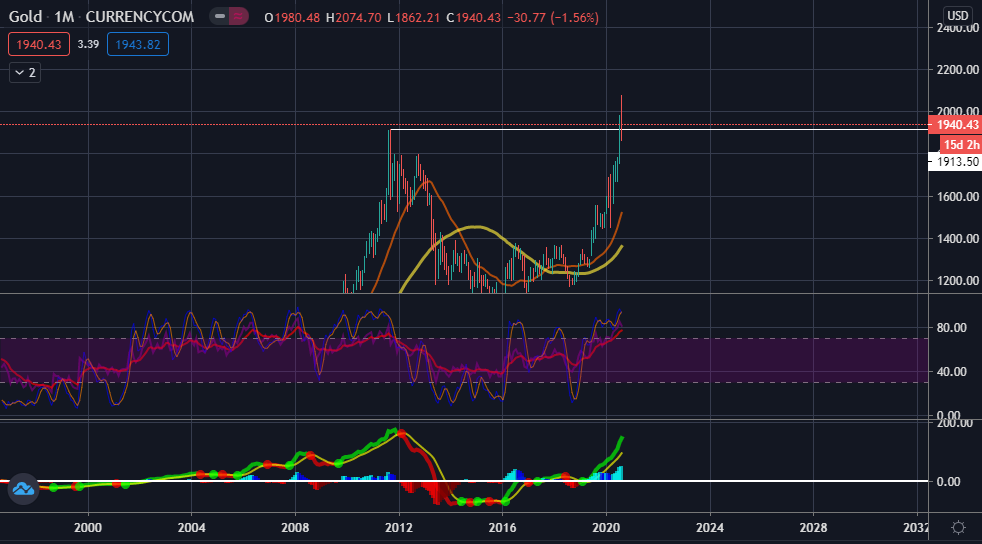 Still in the monthly, it is possible to see an exhaustion of the RSI that is in a dangerous oversold zone and the MACD that is approaching the zone where the historic maximum dropped, the most interesting for the graph would be to lateralize that zone to reset the indicators and rise strongly. 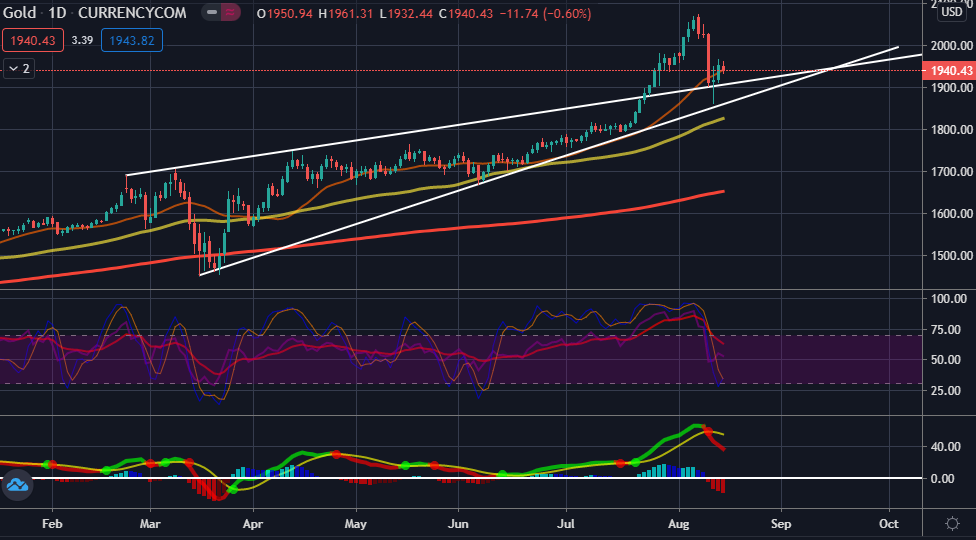 Falling for the diary we can see that the reset of the indicators has already started and he returned to remain the previous resistance that now became support. If he remains above the historic high, it is possible that he will start to rise slowly until he has the strength to break through the recent top again and continue his bull run. If the worst case happens and it falls below the support of the previous historical top, it could come to test the 200-period moving average (red line on the graph) which is currently in the $ 1652 range.

If you are in doubt about where to buy, I buy my PAXG tokens on the Kraken platform

0x is an open source search protocol that facilitates a transfer of "peer-to-peer" ERC tokens on the Ethereum blockchain. The protocol uses a set of smart contracts from Ethereum to perform these transactions. The 0x token (ZRX) is the fuel of the 0x decentralized exchange. The token is used on the network to facilitate various transactions, having decentralized governance over the platform, which helps to minimize network interruptions. It also helps to create a feedback loop from which developers can benefit from its wider adoption. Coordination problems within the network are also resolved using the token. The 0x protocol is application independent and its smart contracts are open source and publicly accessible. This allows any development team to build at 0x if they need an exchange function for their token or platform, so that the protocol serves as a plug-in for other dApps powered by Ethereum. 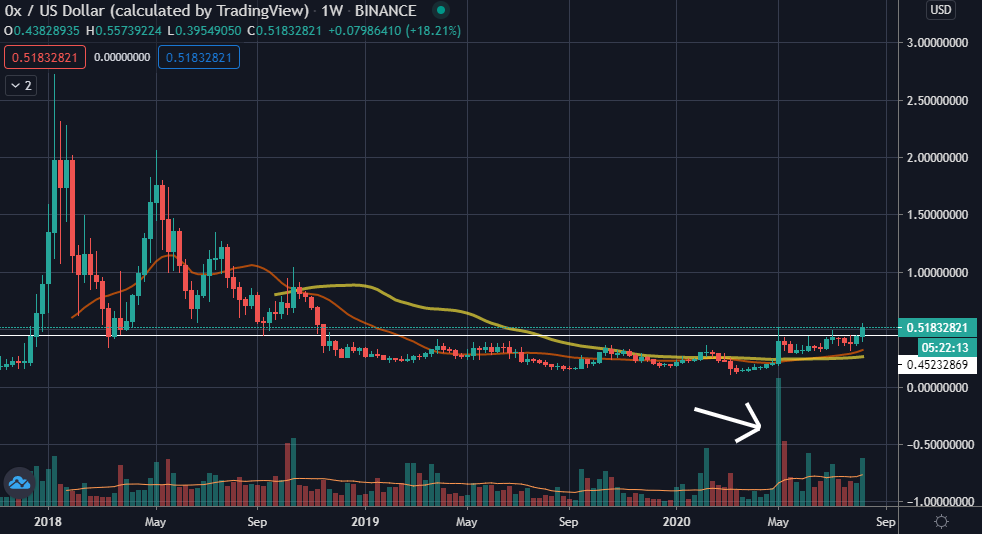 The same pattern seen in the OmiseGo chart can be seen here, very high volume followed by the breaking of an important resistance, with the breaking of that zone the path is totally with the bulls, with the zone marked in white as extremely strong support we will pass to the next targets that the price can reach. Despite the great price fluctuations in the past of ZRX, it has a very promising projection, which may return or even exceed its historical maximum.

According to the indicator provided by Tradingview, we have all the moving averages analyzed showing purchase against neutral oscillators. 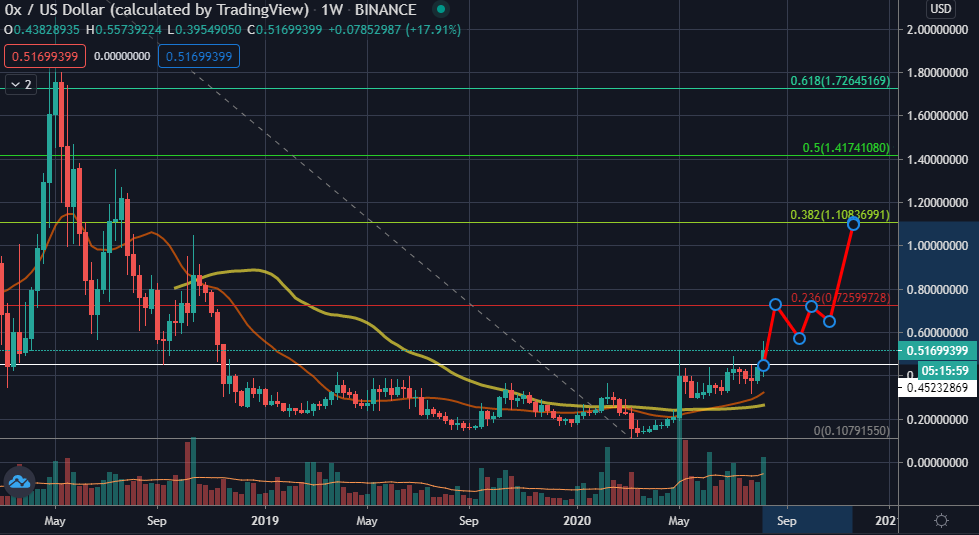 The expected movement for the coming weeks is very similar to that of OmiseGO, with the difference that the resistance on the way is lower and the indicators are more positive.

In case you are an observer, you noticed that all the tokens analyzed here run on the ethereum platform, that says a lot. 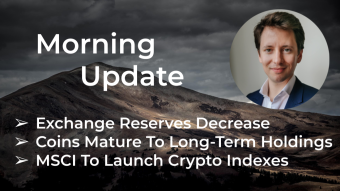 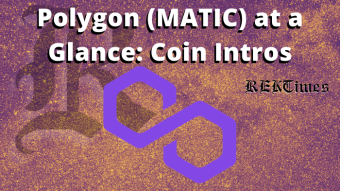 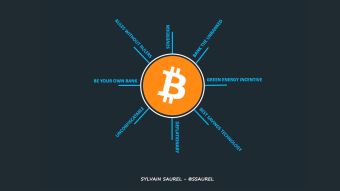 What Does Bitcoin Bring to the World?