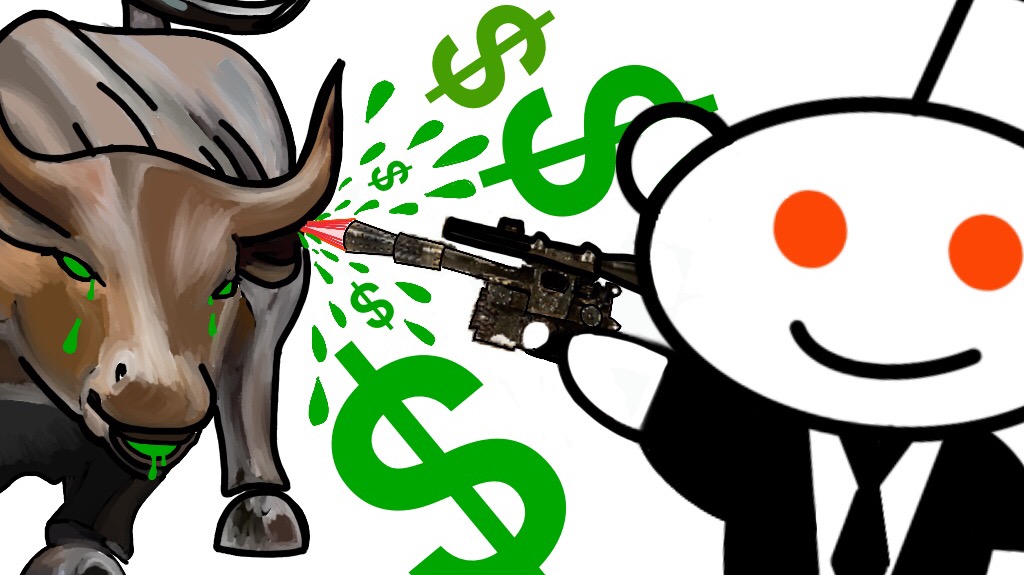 Wall Street -vs- The Internet

What did #OccupyWallStreet achieve? They brought awareness to the 1% They annoyed the super rich? What effect did the movement actually have though? I was in San Diego at the time and when I went to see the protesters they were on a hunger strike. Although I was happy to see people standing up to the bankers, I really doubted that they would even notice or care that some people in California decided to go hungry, but this new movement is hurting the bankers by beating them at their own rigged game which is why it's so beautiful and exciting.

When I heard about Reddit's WallStreetBets subreddit and movement to punish the hedge funds who are short-selling by pumping their shorted stocks, it truly brought joy to my heart. It's about time someone stuck it to those fuckers! The Reddit community recently managed to cost Wall Street hundreds of billions of dollars by pumping Gamestop (GME). This may have originated on Reddit, but it is an Internet thing now and this is just the beginning. I'm looking forward to round two of this battle.

Discord temporarily shut down the server that was being used to make all of this happen.

"The WallStreetBets server has been on our Trust & Safety team’s radar for some time due to occasional content that violates our Community Guidelines, including hate speech, glorifying violence, and spreading misinformation."

Bullshit! Powerful bankers threatened Discord to shut it down. Who cares? It's back up now. Shut down Reddit. Shut down Discord. It doesn't matter! We the people, will just find better and more sophisticated ways to defeat Wall Street. Let's see them try and censor any content on HIVE!

I've never had an opinion about AOC. I just know she pisses of the right like crazy, but I really like what she said about all of this on her Twitter.

"Gotta admit it’s really something to see Wall Streeters with a long history of treating our economy as a casino complain about a message board of posters also treating the market as a casino."

How do you feel about all of this? What is the next step? What's Wall Street going to do about it?

Alien & Bull Sketch
I traced the Wall Street bull and the Reddit alien by adding new layers in Procreate to create the cover image. I used Han Solo's blaster as the weapon and drew green blood and dollar signs bleeding out of the bull as the alien shoots it without even looking in true Han Solo fashion. You have my permission to reuse it anywhere.

How the internet is beating the bankers.