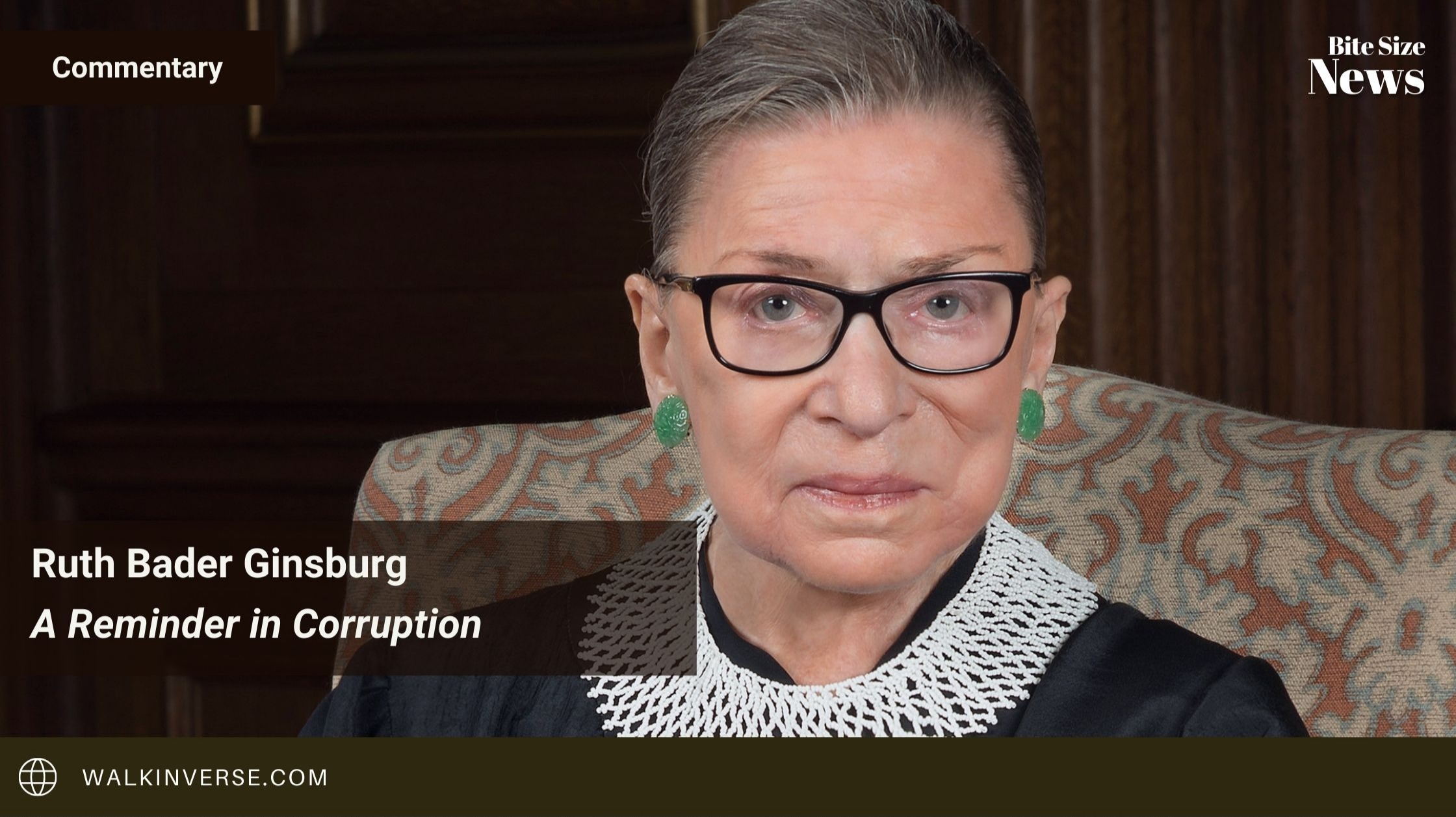 As people mourned the death of Justice Ruth Ginsburg, I celebrated. The question then becomes, why would I say such a terrible thing? The media positions her as one of excellence: awe, admiring deeds for humanity. After all, didn’t the president (Reilly, Mollie. 2020) himself claim Ruth as, “A Titan of the Law who was a fighter to the end?” A person known for her brilliant opposition at the Supreme Court and one with a sharp mind?

“Renowned for her brilliant mind and her powerful dissents at the Supreme Court, Justice Ginsburg demonstrated that one can disagree without being disagreeable toward one’s colleagues or different points of view,” Trump said. “Her opinions, including well-known decisions regarding the legal equality of women and the disabled, have inspired all Americans, and generations of great legal minds.”

“Our nation has lost a justice of historic stature. We at the Supreme Court have lost a cherished colleague. Today we mourn but with confidence that future generations will remember Ruth Bader Ginsburg as we knew her, a tireless and resolute champion of justice.”

A Look Into What Ruth Stood For

In 1993, Bill Clinton nominated Ruth to the Supreme Court. She was the second woman in history to grace the bench. A woman of Jewish descent. One who knew the depth of hell from the terror her people withstood during Hitler’s and Stalin’s reign. Many believed her journey to the United States Supreme Court was but a miracle.

Yet, the question remains, was Ruth a champion of Justice or a monster in disguise?

It depends on what one considers a protector of life. Over her career, she supported the genocide of children through Planned Parenthood. And to drive this point, President Alexis McGill Johnson makes it clear. He tells all how Ruth helped the organization become what it is today (Axelrod, Tal. 2020).

“Tonight we honor that legacy [Ruth’s choices], but tomorrow, we’re going to need to get to work to preserve the ideals she spent her life’s work defending [murder of the unborn through abortion]. Because this is not an understatement: The fate of our rights [the continued extermination of babies], our freedoms, our health care, our bodies, our lives, and our country depend on what happens over the coming months [continued funding the organization and it’s profits from murder of the unborn],”

To set the record straight, Planned Parenthood isn’t about women’s rights or equality. Their core business surrounds profits, not the rights of women.

Planned Parenthood harvests body parts of innocent children. Infants murdered under the guise of civil rights (Dorman, Sam. 2020). During an investigation, invoices exposed them for what they are: human traffickers. They charged an estimated $25,000 for fetal tissue in 2012. Other line-items showed StemExpress at $55.00 per POC (products of conception). It’s another term for fetal remains. Within those records, they also found ten dollar ($10.00) line item changes for blood samples. These acts alone show their criminal intent.

What is partial-birth abortion?

Partial-birth abortion (PBA) is the term Congress has used to describe a procedure that crosses the line from abortion to infanticide. The doctor delivers a substantial portion of the living child outside his mother’s body — the entire head in a head-first delivery or the trunk past the navel in a feet-first delivery — then kills the child by crushing his skull or removing his brain by suction.

In another deposition, another confirmation of the illegal acts performed. The witness stated they altered abortion procedures to avoid crushing the baby’s organs. When confronted about her comments, she admitted, “We’ve been pretty successful with that [illegal practice of partial-birth abortions].”

Investigative journalist David Daleiden expressed, “Planned Parenthood abortion providers appeared under oath in court today and admitted supplying the body parts of children in the womb to for-profit brokers like StemExpress,” (Micaiah Bilger. 2019). But it gets worse. Planned Parenthood sells every form of fresh aborted baby parts. They include, but not limited to: eyes, hearts, and testicles (Steven Ertelt. 2015). This organization isn’t about human rights. It’s a business of genocide for profit, which claims over $528 million a year in taxpayers’ funds.

And we dare wonder why God judges this nation. We have forsaken His ways and no longer seek truth or show mercy to our fellow human-beings.

“Let not mercy and truth forsake you; Bind them around your neck, Write them on the tablet of your heart,”

The crimes committed by these butchers are unimaginable. We lock up people like Ted Bundy, Charles Manson, and others for far less, yet these entities get a free pass. The doctors and employees who perform these procedures make serial killers look like saints. In an interview, Dr. DeShawn Taylor (Steven Ertelt. 2017) explains how she assassinates these innocent children.

“In Arizona, if the fetus comes out with any signs of life, we’re supposed to transport it. To the hospital.”

When one investigator then asks, “Is there any standard procedure for verifying signs of life?”

Taylor replies, “Well, the thing is, I mean the key is, you need to pay attention to who’s in the room, right?”

Taylor then laughs as she repeats what the Arizona law requires, and says, “It’s a mess. It’s a mess.”

And when questioned about the extractions, she stated her concern.

Dr. Taylor doesn’t care about the children lost in these inhuman acts of violence. She rather enjoys it. For her, the best part of her day surrounds the workout from the practice. As babies get ripped from their mothers’ womb, her biceps grow stronger with each extermination.

“My biceps appreciate when the dig[oxin] works,” to kill the fetus before the procedure. “I remember when I was a [Family Planning] Fellow, and I was training, I was like, Oh, I have to hit the gym for this,” she says, describing the force she feels in her biceps when performing a dismemberment abortion with forceps.

This is the golden double standard in the United States. Murder in the first degree outside of Planned Parenthood, life in prison. Murder a baby for profit while lining politicians’ pockets; they look the other way.

Where is the justice in this? Where was the Champion Ruth? No where seen. She instead championed the murder of the unborn. And it’s not only Ruth. Kamala Harris (Daleiden, David. 2020) get’s into the action as well.

When David Daleiden exposed the corruption, Kamala used her power. She shut him down. But luckily, before she could silence him, he exposed the DaVinci company. A business behind the trafficking of baby body parts across the United States (Schweizer, Peter. 2020). Which circle’s us back to the hero of justice, Ruth. A woman who promoted the murder of children and a little fact the media doesn’t want us to discuss. She worked hard to lower the age of consensual sex with children to the age of twelve (Steve Brown. 2008).

“Given that homosexual advocates are in a full court press to lower the age of consent as low as it can go, and pro-pedophile sitting Supreme Court Justice Ruth Bader Ginsburg’s documented advocacy of lowering the age of consent to 12 years old, parents should be horrified that there are so few politicians, like Sen. Santorum, actually defending the family,”

— Timothy Chichester, president of the CFAA

Anyone who supports Ruth as a champion of Justice needs to re-examine their moral stance. Because from where I sit, she stood for murder of the innocent and sex with minors: not women’s rights or justice.

While many mourned over Ruth’s death, I honor it. She can no longer damage any more children. Her work helped eliminate the heritage God gave us, our children.

“Behold, children are a heritage from the LORD, The fruit of the womb is a reward. Like arrows in the hand of a warrior, So are the children of one’s youth. Happy is the man who has his quiver full of them; They shall not be ashamed, But shall speak with their enemies in the gate.”

Happy are those who protect the unborn, not destroy them for financial or political gain.

Daleiden, David. 2020. “Journalist Who Exposed Planned Parenthood: Kamala Harris Weaponized Her Office to Punish Me on Behalf of Her Donors.” Breitbart. October 28, 2020.