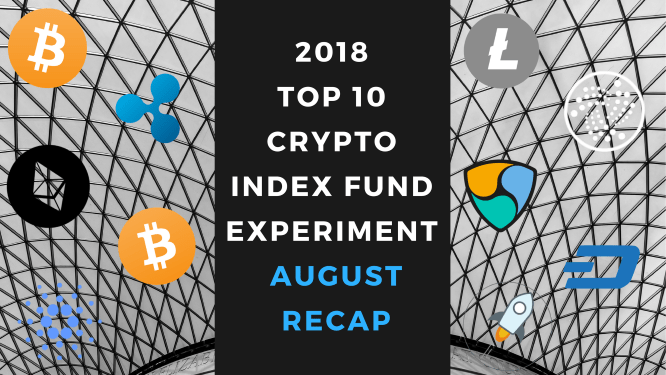 See the full blog post with all the tables here.  And learn about the history and the rules of the Experiments here.

Get $50 of FREE EOS with Coinbase Earn

Considering getting into cryptocurrencies?
Be prepared for a wild ride.
In fact, I recommend getting your financial house in order first.

August was not quite as strong as all-green July, but still a solid month for the 2018 Top Ten Crypto Index Fund Experiment. The gains were led by (I hope you’re sitting down for this one) (drum roll please) (you’re not going to believe this): NEM(!) which finished the month up over +200%. Really!

The US Justice Department announced in August that it had seized cryptocurrency from terror groups in the Middle East. How much did they confiscate?

Ranking and August Winners and Losers

Lots of movement this month: all but three cryptos moved positions in August and all but one (NEM!) in the wrong direction. Despite gaining in value, Dash had the biggest slide, down four in the rankings from #24 to #28. ADA fell three and has dropped back out of the Top Ten. XRP, Bitcoin Cash, IOTA, and Stellar each lost one place in the rankings. The lone exception is a big one: XEM(!) climbed an unprecedented 9 spots in August. The last time NEM was in the Top Twenty was May 2019.

After thirty-two months, 50% of the cryptos that started 2018 in the Top Ten have dropped out. NEM, ADA, Dash, IOTA, and Stellar have been replaced by Binance Coin, Tether, BSV, CRO, and most recently, LINK.

August Winners – Don’t call it a comeback, NEM‘s been here for years. Up over +200% in August, NEM crushed the rest of the field. A distant second place was ETH, up +32% on the month.

August Losers –  Down -13%, ADA was the worst performing crypto of the month, followed by Bitcoin Cash, down -9%.

For the overly competitive, below is a tally of the winners of the first 32 months of the 2018 Top Ten Crypto Index Fund Experiment. Bitcoin still has the most monthly wins (7). Cardano is a close second with 6 monthly wins. Despite its blockbuster August, NEM has the most monthly losses with 6. Every crypto has at least one monthly win and Bitcoin is unique as the only cryptocurrency that hasn’t lost a month in the 2.5+ years of the Experiment.

Although BTC didn’t make any major moves this month, it continued to slowly but surely approach its break-even point. It is down about -10% since my purchase in January 2018. The initial investment of $100 thirty-two months ago is now worth about $90.

Ethereum is all alone in second place. It had a strong August, it picked up a lot of ground, but is still down -35% since January 2018.

The big story this month is at the bottom: NEM(!) gained +200% in August, crushing its counterparts and leaping out of last place, where it was so comfortable for so, so long. Although still down -83% over the life of the experiment, it moved from 10th place to 6th place in just one month. The new king of the basement is Dash, down -91%. The initial $100 invested in Dash 32 months ago is now worth $8.50.

The crypto market added nearly $43B in August. The last time we saw a similar level in terms of overall crypto market cap was way back in the fifth month of the 2018 Top Ten Experiment: May 2018.

After being stuck in the mid-60s for most of 2020, BitDom dropped significantly this month, down to 57%. For context, the last time BitDom was this low was back in June 2019.

For some more context: since the beginning of the experiment, the range of Bitcoin dominance has been quite wide: we saw a high of 70% BitDom in September 2019 and a low of 33% BitDom in February 2018.

While -71% isn’t something to brag about, the monthly trend is encouraging. Here, take a look at the ROI over the life of the experiment, month by month, for some context:

So, -71% from a bottom of -88% is moving in the right direction. Or that’s what I tell myself as I cry myself to sleep nightly. Hopefully the next stop will be in the -60% range, a level this experiment hasn’t seen in years.

Here’s a table to help visualize:

A +31% gain by investing $1k on whichever cryptos happened to be in the Top Ten on January 1st for three straight years, not bad. But surely you’d do better if you invested only in one crypto, right? Depends on your choice. Let’s take a look:

Only five cryptos have remained in the Top Ten for all three years: BTC, ETH, XRP, BCH, and LTC. Knowing what we know now, which one would have been best to go all in on, at least at this point in the Experiment? Ethereum, easily: the initial $3k would be up +160%, worth over $7800 today. The worst performing at this point is XRP, down -17%.

I’m also tracking the S&P 500 as part of the experiment to have a comparison point with other popular investments options. Defying global gloom, the S&P 500 reached an all time high in August and is up +31% since the beginning of the Experiment. The initial $1k investment into crypto on January 1st, 2018 would have been worth about $1310 had it been redirected to the S&P.

But what if I took the same invest-$1,000-on-January-1st-of-each-year approach with the S&P 500 that I’ve been documenting through the Top Ten Crypto Experiments? Here are the numbers:

That is up over+27% since January 2018, compared to a +31% gain of the combined Top Ten Crypto Experiment Portfolios.

That’s a 4% swing in favor of the Top Ten Crypto Portfolios! As you’ll see in the table below, this is only the second time since I started recording this metric that crypto has outperformed the S&P had I taken a similar investment approach:

This is a big turnaround from the 22% difference in favor of the S&P just two months ago. Although it’s fun to see crypto is in the lead, I’ll leave it to you to decide whether the heart condition you may develop by being in the cryptosphere is worth that +4% edge…

August was a bit mixed compared to July, but still a very solid month for the 2018 Top Ten. Some interesting developments this month: Bitcoin is now within 10% of the price I paid on January 1st, 2018. ETH had solid gains and NEM(!) had a crazy month, tripling in value and finally climbing out of the basement. At the same time, traditional markets are doing well too: the S&P reached an all time high in August. It will be interesting to see how both markets perform during the final third of a very crazy year.

Thanks for reading and for supporting the experiment. I hope you’ve found it helpful. I continue to be committed to seeing this process through and reporting along the way. Feel free to reach out with any questions and stay tuned for progress reports. Keep an eye out for my parallel projects where I repeat the experiment twice, purchasing another $1000 ($100 each) of two new sets of Top Ten cryptos as of January 1st, 2019 then again on January 1st, 2020.

According to federal prosecutors, the US Justice Department seized $2 million worth of cryptocurrency from terror groups in the Middle East including ISIS, al Qaeda, and the al Qassam Brigades.