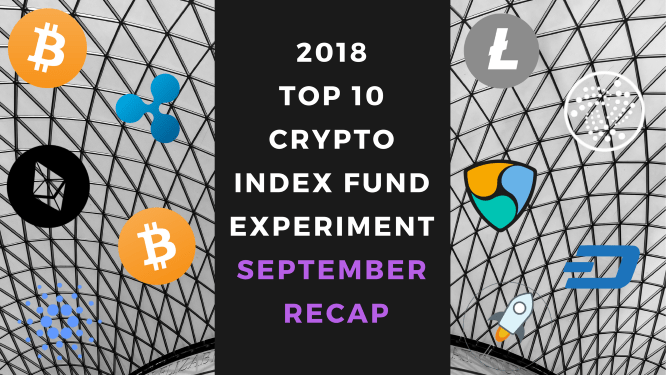 See the full blog post with all the tables here.

And learn about the history and the rules of the Experiments here.

Get $50 of FREE XLM with Coinbase Earn

Considering getting into cryptocurrencies? Be prepared for a wild ride.

In fact, I recommend getting your financial house in order first.

After a rough start to September, crypto spent the month trying in vain to claw back ground.  While a few coins rebounded quite a bit from the monthly lows, most ended up finishing the month significantly down.  Out of the 2018 Top Ten group, Bitcoin lost the least, down -8% in September.  NEM followed it’s winning August (yes, you read that right) with the poorest performance, down -26%.

Ranking and September Winners and Losers

A lot of shuffling in September.  On the upside, Bitcoin Cash and Cardano gained one place each landing at #5 and #10 respectively.  Cardano gets special mention for re-entering the Top Ten.

Heading the wrong direction were IOTA, NEM, Dash, and Stellar each falling two or three spots.

The big story though, for long time crypto watchers, was the ejection of Litecoin from the Top Ten, down five places from #7 to #12 in just one month.  For some context, Litecoin’s absence from the Top Ten is a Top Ten Experiment first.  It is also the first time since CoinMarketCap has tracked crypto rankings that Litecoin has not been in the Top Ten.

Drop outs: After thirty-three months of this experiment 50% of the cryptos that started 2018 in the Top Ten have dropped out.  NEM, Litecoin, Dash, IOTA, and Stellar have been replaced by Binance Coin, Tether, BSV, LINK, and most recently, DOT.

September Winners – Although it lost -8% of its value, this month’s W goes to Bitcoin. ADA gets second place, down -15% and climbing back into the Top Ten.

September Losers –  As most probably expected after an extremely out of character victory last month, NEM came back down to earth in September, bigly, down -26%.  Litecoin finished right behind, down -24% and dropping out of the Top Ten.

For the overly competitive, below is a tally of the winners of the first 33 months of the 2018 Top Ten Crypto Index Fund Experiment. Bitcoin still has the most monthly wins (8) and Cardano in second place with 6 monthly wins. With its poor September performance, NEM now has 7 monthly losses. 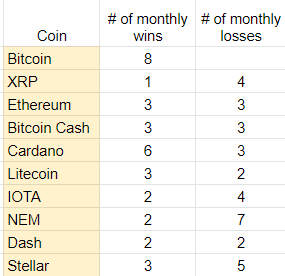 Every crypto has at least one monthly win and Bitcoin is unique as the only cryptocurrency that hasn’t lost a month yet since January 2018.

Overall update – BTC solidly in the lead, followed by ETH. Dash in the basement, LTC drops out of the Top Ten.

Even though BTC took a bit of a detour on its way back to break-even point, it is still far ahead of the field, down -17% since January 2018. The initial investment of $100 thirty-three months ago is now worth about $83.  Second place Ethereum is down -49% over the same time period.

The big story this month is LTC’s departure from the Top Ten, the first time since I started the experiment back in January 2018.  Whether or not it will eventually fend off the new generation of coins remains to be seen, but it certainly is noteworthy to have one of the most well known and long standing cryptos drop out of the Top Ten.  Consider pouring one out for Litecoin. 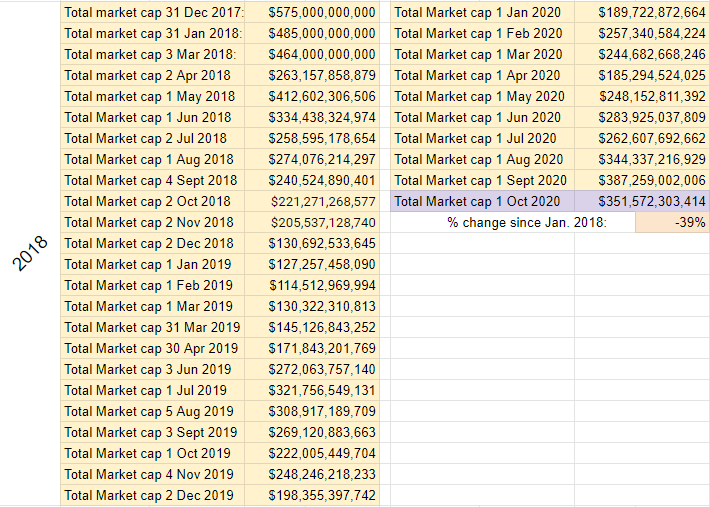 The crypto market lost over $35B in September and is down -39% since January 2018. The value of the overall crypto market is near where it was in August of this year, just a few months back.  As painful as the beginning of the month was, looking at a table like this helps with perspective, especially if you’re panic prone.

After steadily dipping for months, BitDom increased a bit in September, up to 57.5%.

For some context: since the beginning of the experiment, the range of Bitcoin dominance has been quite wide: we saw a high of 70% BitDom in September 2019 and a low of 33% BitDom in February 2018.

September broke an encouraging upward trend, but at least the portfolio is taking a break from the -80% range.  Here’s a look at the ROI over the life of the experiment, month by month, for some context:

That’s up about +11% for the three combined portfolios, compared to +31% last month.

Here’s a table to help visualize: 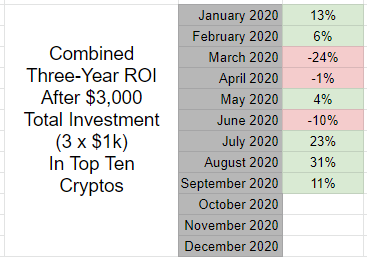 That’s a +11% gain by investing $1k on whichever cryptos happened to be in the Top Ten on January 1st for three straight years.

But surely you’d do better if you went all in on one crypto, right?

Depends on your choice. Let’s take a look:

Only five cryptos have started in the Top Ten for all three years: BTC, ETH, XRP, BCH, and LTC (unless Litecoin can make a comeback by the 1st of Jan. 2021, it’s not going to make the four year club!). Knowing what we know now, which one would have been best to go all in on?

Ethereum, by a pretty good margin: the initial $3k would be up +104%, worth $6,118 today. The worst choice of a basket to put all your eggs in at this point in the experiment is XRP, down by almost one third.

I’m also tracking the S&P 500 as part of the experiment to have a comparison point with other popular investments options. The S&P 500 Index fell from an all time high in August, but is currently up +26% since January 2018. 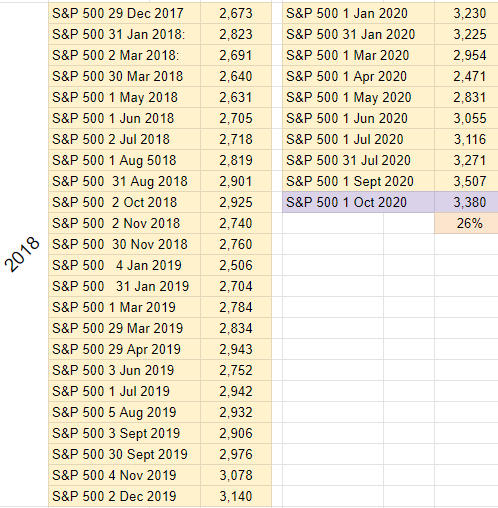 The initial $1k investment into crypto on January 1st, 2018 would have been worth about $1260 had it been redirected to the S&P.

But what if I took the same invest-$1,000-on-January-1st-of-each-year approach with the S&P 500 that I’ve been documenting through the Top Ten Crypto Experiments? Here are the numbers:

That is up +22% since January 2018, compared to a +11% gain of the combined Top Ten Crypto Experiment Portfolios.

That’s an 11% swing in favor of the S&P 500 and breaks a two month mini-streak of wins from the Top Ten crypto portfolios.

September was a tough month for both traditional and crypto markets.  What’s next for the rest of 2020?  More volatility is no doubt to come as we enter the last quarter of a truly unpredictable and exhausting year.  Buckle up.

Thanks for reading and for supporting the experiment. I hope you’ve found it helpful. I continue to be committed to seeing this process through and reporting along the way. Feel free to reach out with any questions and stay tuned for progress reports. Keep an eye out for my parallel projects where I repeat the experiment twice, purchasing another $1000 ($100 each) of two new sets of Top Ten cryptos as of January 1st, 2019 then again on January 1st, 2020.

According to an official announcement in September, Kraken is “the first digital asset company in U.S. history to receive a bank charter recognized under federal and state law.” 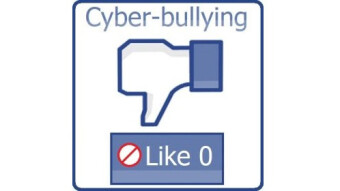 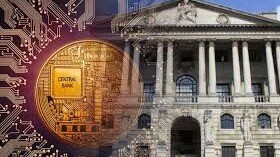 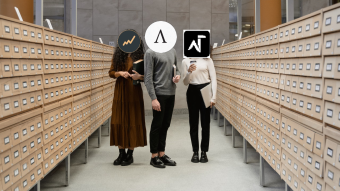