A glutton for punishment, I've decided to extend my 2018 Top Ten Crypto Experiment for one more year. Yes, that means that I will continue to hold and report out on my January 1st, 2018 $1000 investment ($100 each) into the Top Ten coins at the time. Since one year feels like a lifetime ago in crypto time, here's a reminder of the coins I originally purchased: I've decided not to sell but rather to continue tracking the 2018 Top Ten and turn this into a two year experiment.

I will link that experiment here once I've completed the write up.

Without further ado, let's get to the January update. Instead of hypothetically tracking cryptos, I made an actual $1000 investment, $100 in each of the Top 10 cryptocurrencies by market cap as of the 1st of January 2018. It began as a lazy man's Index Fund (no weighting or rebalancing), but I've moved away from that terminology as things have changed quite a bit since January 1st, 2018 (plus the term "Index Fund" brought out the shills trying to sell their own Crypto Index Fund product).

My experiment is less technical, more fun (for me at least), and hopefully still a proxy for the entire market- or at the very least an interesting snapshot of the 2018/2019 crypto space. I'm trying to keep it simple and accessible for beginners and those looking to get into crypto but maybe not quite ready to jump in yet.

After a steady December, the crypto space seems to have resumed it's steady march downwards: the crytpo market as a whole sank over -10% in January. That's actually not such a dramatic drop for crypto, but the overall direction is unmistakable. Illustrating this point, every one of the original Top Ten cryptos I've been tracking finished in the red in January 2019. 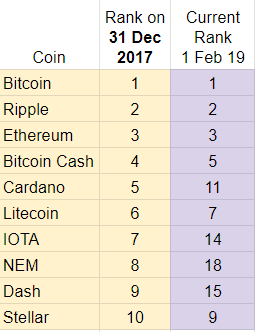 Lots of movement this month. Ripple and Ethereum switched places now occupying slots #2 and #3, respectively. Bitcoin Cash dropped to 5th place and now has been overtaken by EOS. IOTA slipped from 12th place to 14th place. NEM dropped from 16th place to 18th place and is now in danger of dropping out of the Top Twenty. After a mostly stellar 2018 (see what I did there?), 2018 Top Ten Experiment Champion XLM dropped from 4th place in November to 6th place in December to now 9th place and the end of January 2019. Unless Stellar can turn it around soon, it may soon drop out of the Top Ten.

NEM, Cardano, Dash, and IOTA are Top Ten dropouts - they have been replaced by EOS, Tether, Bitcoin SV, and Tron.

January Winners - Litecoin just edged out Cardano for the best performer of the month, down only -4.8% compared to Cardano's loss of -5%.

January Losers - NEM lost -36% of its value in January, followed closely by IOTA and Ethereum, each down over -30%. Overall update – Stellar and Bitcoin tied for the lead. NEM at the bottom.

Although Stellar had a rough month (down -25%), it remains in the lead for now - but Bitcoin has made up a lot of ground in the last few months and now has moved into a virtual tie for the lead. BTC and XLM, stay humble: being in the lead means you're "only" down -74% since the start of this experiment, the 1st of January 2018. As mentioned earlier, after a fairly flat December, the total crypto market seems to have resumed it's steady march downwards, sinking over -10% in January. The value of the market has dropped from $575B at the start of 2018 to $114B today, a -80% drop. Flat here as well. Bitcoin dominance has basically remained steady since September 2018. It makes sense: as we've seen this throughout the experiment, when the overall market dives, BTC's dominance increases, although we seemed to have hit an upper limit of around 50%.

If I cashed out today, my $1000 initial investment would return $122, down -88%. As has been the case for most of my reports, I'm again officially at the lowest point in terms of value.

As has been the case six times out of thirteen experiment months, no cryptos finished the month in positive territory. Red, red, red.

Stellar, 2018's champion, seems to be in real danger of losing its position in the Top Ten as well as its status as experiment leader.

The experiment's focus of solely holding the Top Ten continues to be a losing strategy. While the overall market is down -80% from January 2018, the cryptos that began 2018 in the Top Ten are down -88% over the same period of time. At no point in the experiment has this investment strategy worked: the initial Top Ten continue to under-perform compared to the market overall.

The 8% difference is the same gap as last month. The widest gap was a 12% difference at one point last year (September 2018).

I'm also tracking the S&P 500 as part of my experiment to have a comparison point with other popular investments options. After a pretty significant December dip, the stock market rebounded a bit in January 2019. It's up about 1.2% since the beginning of 2018, so an $1k investment would have yielded $12. Yet another down month, not the best way to start 2019. The overall market cap for crypto is approaching the psychologically important $100B mark. If it falls under $100B, buckle up. 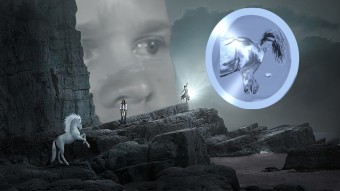 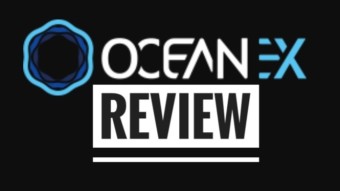 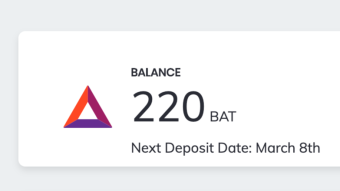 How-to: Get your Brave BAT rewards paid from your mobile browser sooner