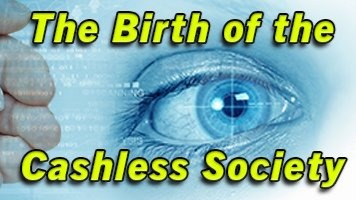 The Birth of the Cashless Society

The Birth of the Cashless Society

As we all know by now, the entire corona crisis was and is an excuse for The Great Reset. And, as anyone who has followed the financial prognostication space for the past decade knows, “the great reset” has been used nearly interchangeably with “the global currency reset” to describe the collapse of the old dollar-centric Bretton Woods system and the rise of a new international monetary order.

It should come as no surprise, then, that the post-corona Great Reset being hyped by the World Economic Forum and their globalist fellow travelers is itself predicated on a global currency reset. But this global currency reset has a distinctly 21st-century technocratic flavour.

The form that this currency reset is taking reveals itself in the latest headlines from the world of central banking:

Yes, to the surprise of absolutely no one, the central banksters are using “The Great Reset” as a smokescreen to smuggle through one of their most cherished fantasies: the cashless society. Soon, central banks will be issuing national digital currencies and tracking every single transaction in the economy in real time.

And if you were able to read that last paragraph without feeling a chill run down your spine, then you need to get up to speed on what the cashless society entails and why it must be resisted with every last fiber of our being.

The “digital dollar” that the US senate banking committee is holding hearings about is the same digital dollar proposal that I talked about in my podcast on The Greatest Depression this past March. As you’ll recall, the Digital Dollar Project is being promoted by the World Economic Forum (surprise, surprise) and sold to the public via the old Cold War trick of “the Russkies Chinese are doing it, so we have to, too!”

Specifically, as the globalist crony insiders explained in their Wall Street Journal op ed on the idea last year:

We propose a digital dollar—a government-sanctioned blockchain protocol, created and maintained by an independent nongovernmental group but administered by banks and other trusted payment organizations. Cash brought into the system would be exchanged for digital U.S. dollars on a blockchain, with the cash lodged in special escrow accounts maintained by the Federal Reserve.

In other words, the fine folks over at the Fed would be the invisible counter-party watching lovingly over the digital money system. What could possibly go wrong?

The digital dollar being proposed is a type of “Central Bank Digital Currency” (CBDC), which the Bank for International Settlements (aka the central bank of central banks) was writing about back in 2017. In fact, the idea goes back even further, to a proposed Fed-run central bank cryptocurrency called Fedcoin (I kid you not).

As I explained last year, the point of these “central bank digital currencies” is to take advantage of The Bitcoin Psyop by presenting the cashless society as the cool, hip new spin on that bitcoin/crypto thing all the cool kids are talking about. Of course, this “Fedcoin” concept utterly subverts the very core impetus for bitcoin and cryptocurrency right off the bat, a point highlighted and underlined in the original “Fedcoin” proposal: “It (Fedcoin) reintroduces one central point of control to the monetary system by granting a central bank the ability to set the supply of tokens on a Fedcoin blockchain.”

In other words: “Hey guys, you know that idea for making central banks obsolete by taking the money creation power completely out of their hands and bypassing all intermediaries in the banking system? Well, this is exactly like that, except we’re going to put all the power over this system in the hands of the central bank.” Sadly, few in the public will even be able to see the blatant contradiction.

And, given that this is now being portrayed as some sort of monetary arms race with those dastardly chinese and their proposed digital yuan, you can bet that a good portion of the public will embrace this new currency with open arms.

As researcher Steven Guinness has been meticulously documenting at his blog over the last several months, this introduction of central bank digital currencies in England and elsewhere is being fast-tracked by the Bank for International Settlements on the back of the World Economic Forum’s “Great Reset” agenda and is slated to be ready by 2025. The current scamdemic pandemonium only further helps to prepare the public to get ready to trade in their filthy, virus-laden cash for healthy virtual Fedcoins.

But still, this may just seem like a technological upgrade to our payment systems. People increasingly pay with cards or payment apps anyway, so what difference does it make if we eliminate cash altogether?

I have done a lot of work on the cashless society over the years, but it’s one of those concepts that is so large and so difficult to envision in its entirety that it’s worth revisiting here. To get a sense of how the cashless society is not about payment convenience but about control over every aspect of your lives, watch this short video that the ACLU put out a decade and a half ago:

This video wasn’t even meant to warn about the cashless society. The hapless victim of this pizza transaction ends up being forced to pay in cash because his credit card is maxed out. But nonetheless, this is the vision of the cashless society in a nutshell. In the cashless society, your entire payment history and all of the information that is tied into that history will be plainly visible to those who have access to it. And if the government issues a decree about what you are or are not able to purchase, that decree will be enforced at the point of sale. At that point, freedom will only be found in the counter-economy.

If you want to get a handle on what such a future will look like, imagine the following scenario:

You are out for a walk late at night. You come to a red light, but there is no one around. You hesitate a moment, double-check that there is really no one in sight and then dash across the intersection. In the two seconds it takes you to cross the road, a large LED screen above the street lights up with your picture and your name. Two seconds after that you feel a buzz in your pocket. Taking out your phone you find a message from your bank informing you that you have been fined for jaywalking and that your social credit score has been reduced.

The next day, you find yourself at the airport, preparing to board a flight to visit your family on the other side of the country. When you go to check in you receive a message that your social credit score is too low and you will not be allowed to board the plane. Enraged, you curse the airline, the government’s social credit system, its jaywalking laws, and even the government itself.

Unbeknownst to you, someone has recorded your outburst and uploads it to social media, where you are quickly identified. The police come to your home the next day and take you downtown where you are shackled in a chair and made to recant your statements about the government.

Sound like something out of a dystopian sci-fi novel? Well, it’s not. It’s just a mundane portrayal of everyday life in current day China.

Facial recognition deployed to monitor the streets and automatically issue fines for jaywalking and other minor infractions? Check.

Social credit scores tied in to your ability to board public transportation or access government services? Check.

Police hauling people in for angrily ranting about the government and shackling them until they recant? Check.

The cashless society is about so much more than just how we pay for things at the store. Tied into a system of persistent technological surveillance, it represents the ultimate control over our lives. Can there be any doubt as to why the World Economic Forum and the Bank for International Settlements are working in concert with the central banks of the world and organizations like the Bill Gates-co-founded Better Than Cash Alliance to pave the way for this nightmare to become a reality?

The Corbett Report is edited, webmastered, written, produced and hosted by James Corbett.

An award-winning investigative journalist, James Corbett has lectured on geopolitics at the University of Groningen’s Studium Generale, and delivered presentations on open source journalism at The French Institute for Research in Computer Science.