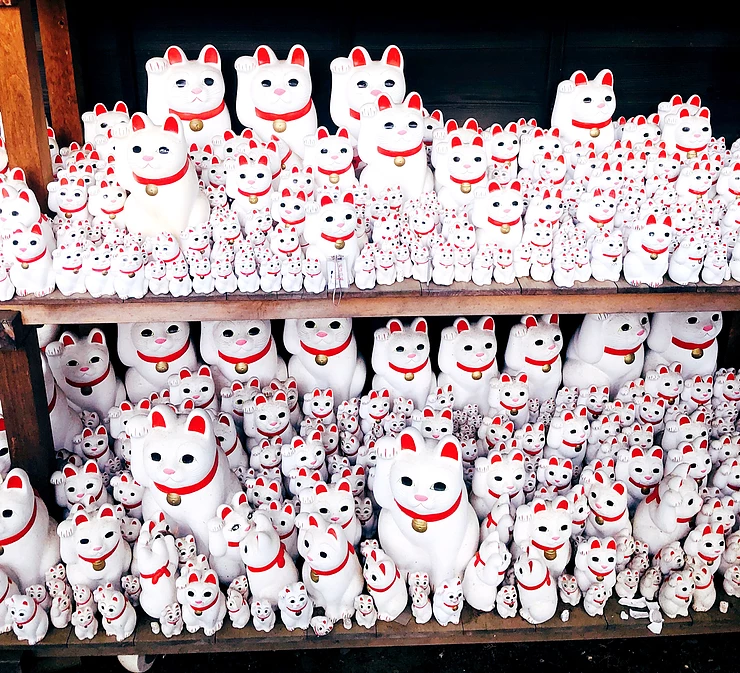 It's said the temple is the place of origin of the famous Japanese beckoning cat "maneki neko" that many of us got used to seeing in front of Japanese shops. There is a belief that "maneki neko" brings in customers and money.

There are many legends regarding this temple built back in the 14th century, but my favorite one is about the feudal lord who passed by the temple and was beckoned by a cat. Eventually, he followed the cat and decided to stay in the temple.

Following years, there had been a fire in the temple caused by a thunderstorm. The lord was so thankful to the cat and the temple that sheltered him in the past so he decided to collect enough funds and afterwards rebuild the temple. The lord claimed it as his family property and later the temple was called Gōtokuji.

People believe that "maneki neko" makes their dreams come true so they started bringing cat dolls into the temple. Nowadays, there are over 1000 cat dolls in Gōtokuji.

The temple is large, but the designated place for cat dolls, actually in a very hidden corner. Do not worry, you’ll find it easily as you notice everyone goes in the same direction.

Have you been there? Would you like to go to cat heaven in Japan?

The Land of Samurai