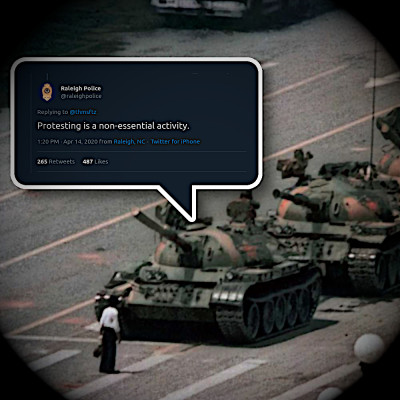 In 1989 a lone protester stood his ground against an armored column leaving Tiananmen Square in Beijing in a now-immortalized symbol of the triumph of the human spirit over totalitarian oppression. Now, faced with economic disaster resulting from the quarantine orchestrated to stem the growth of the global coronavirus pandemic, the people are starting to fight back. Protesters have rallied across the US, defying stay-at-home orders in an attempt to regain their livelihoods. The unique situation surrounding this worldwide disaster has brought revolution closer than ever before.

Some of the more naïve among us may have believed in government respecting reasonable limitations of power. Within a matter of weeks, all that was gone. The right to peacefully conduct commerce, to assemble, to travel, and many others was quickly suspended without due legislative or judicial process. When we really get down to it, there is no separation or limitation of powers. There is only absolute and total power, just a crisis away from being flexed. The anarchists among us already believed this was the case, and now only fools will continue to doubt.

Government's response has proven to be cruel, corrupt, and incompetent

Soon after it became very apparent that governments possessed all the power, it became even more apparent that they deserved none of it. The stories of hypocrisy, sheer incompetence, and inhumanity have already piled up. The mayor of Chicago broke her own order deeming hair salons to be non-essential businesses in order to get her own hair done, a decision she defended as essential because of the importance of her position. Police descended on churchgoers on Easter in Mississippi and Kentucky, issuing citations and mandatory quarantines, including for drive-in services. A Colorado father was handcuffed in front of his daughter for playing in the park, while a Miami doctor was similarly detained to prevent him from giving medical assistance to the homeless. New York City cops forced a married cohabitating couple to physically separate or face citations, while speaker-equipped drones flew overhead playing Orwellian warnings to stay inside. These are not your friendly neighborhood public servants. These are thugs, they have always been thugs, and now they have been exposed as such to an increasingly large audience.

Beyond lessening deaths associated directly with contracting the virus, shutdown measures were supposed to prevent overburdening the healthcare system and the damage caused by widespread panic and societal collapse. That outcome, however, is closer and closer to happening as a result of, not despite, these measures. The economic devastation mandated has caused countless businesses to shut down permanently, ruining the dreams and hard work of their owners and laying off untold millions. At the same time, many are not handling social isolation well, with anxiety, loneliness, depression, and other ill effects taking their toll. For both groups of people, the forced shutdown and quarantine are a more real threat to their health and safety than the virus itself.

In most countries, openly and directly defying government orders represent an extremely risky proposition. During times of desperation, however, people tend to get a hell of a lot more desensitized to risk. Animals become dangerous when cornered, and humans are no exception. As the protests around the world begin to multiply, the chance of reaching a true boiling point increases.

Social media is making it incredibly difficult to control the narrative

One of the beauties of having this happen in the modern age is that we all have to contend with the decentralizing presence of social media. At first this only served to exacerbate and hasten the global panic, but it has now just as quickly amplified voices of the resistance. Anyone, anytime, anywhere can record an incident of abuse, compare and contrast on-the-ground situational realities, and broadcast this to the entire planet, where it can spread like wildfire organically and without any backing distribution network. Keeping the people under control is only possible when they are similarly kept ignorant. The latter is no longer possible.

How much longer until we have a global revolt?

The protests we've already seen show how far this situation has already escalated. How much further will it go before governments either rescind their extra powers of face a full-on revolution? What happens when the people really start to get desperate?

Governments were unknowingly baited into showing their heavy hands. Now, in an inability to give back power, they're rolling out the big guns. When will our generation's tank man appear?

Documenting the amazing, historic march of liberty from the frontlines around the world, from the Free State of New Hampshire and beyond. Opinion, interviews, documentary projects, and other content on freedom, philosophy, and current events. If you enjoy the content, please support the channel with tips, either here or via any of the cryptocurrency addresses in my CoinTree link (cointr.ee/thedesertlynx).