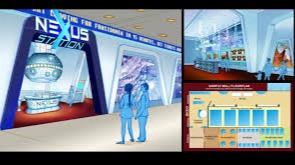 What is "Blockchain Gaming"?

Blockchain gaming is a catch-all term that refers to a video game that incorporates blockchain in some capacity. I have seen everything from the game using it’s own cryptocurrency for purchases to giving crypto rewards to utilizing Non Fungible Tokens (NFT’s). As the old saying goes “There is more than one way to skin a cat” and I think there are many ways to implement blockchain technology for video games.

However, I do think NFT’s is the best way to implement blockchain into video games.

Benefits of NFT’s for Video Games

Silica neXus is creating a marketplace for NFT’s. It will have shops from partnered game develops, an auction house and peer to peer trading. It will also put kiosks in video game arcades so players win NFT’s instead of Chinese Finger Traps and Vampire Teeth. It will also provide an NFT wallet called a “Trade Binder” which will also connect to the partnered games. I am of the opinion that this will revolutionize video games.