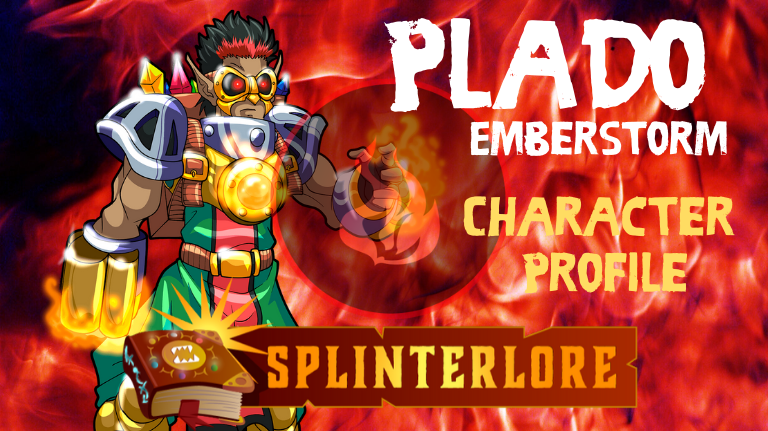 If you can't do it with your hand,
Then use a better tool.
If there isn't one around,
Make one up, or you're a fool. 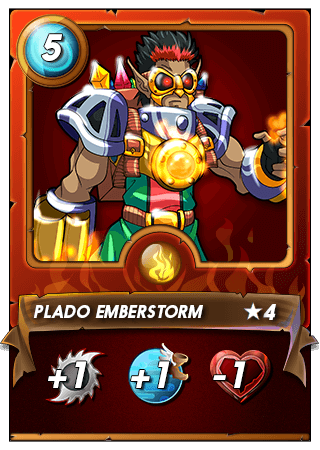 Lifespan - Plado looks deceivingly young. In fact, he would have the appearance of an old man if not for the upgrades he has made to his body through the years. When an important joint, limb or system has begun to fail, Plado has simply replaced it, using his genius mechanical skills. In actuality, he is well over seventy, but his mind is in its prime and his body has never been stronger.

Weapon - Plado Emberstorm embraced his family name when designing his personal arsenal, with which he is always protected. The system is even smart enough to activate in the summoner’s sleep, allowing Plado to slumber peacefully and securely even when being attacked. Basically, a network of electrical nodes installed strategically throughout his body amplify Plado’s natural electricity. The attack falls like a storm of embers, hence the name; Plado is extremely proud of this complex device.

Size - Plado is a Human of average size, perhaps a bit husky on his own, but thanks to his bionic upgrades, extremely heavy. If all his external equipment is removed (and it rarely is), Plado is only about double the weight of a normal man. Many of his implants and devices cannot be removed.
Habitat - Plado Emberstorm lives in his workshop, at the heart of Zariba, the massive cave city of the Burning Lands. Much of his time is also spent in the Smoldering Forest, trading secrets with the Engineers of Balfair.

Diet - During his time in the Emberlands, Plado picked up a taste for seafood, which he had to purchase from conniving Serpentines at a hefty price. He especially enjoys tiny fish, eaten whole. As long as he’s winning ninety percent of his battles, the Torch is happy to cover the enormous bill for Plado’s fish.

Allies- Most of Plado’s inventions are used by the Torch to benefit the entire Burning Lands, but he has something of a secret alliance forming with the Gobson Goblins of Anumün. Above everything else, Plado Emberstorm cares about the advancement of knowledge, so he is willing to work with anyone whose interests align with his own.

Enemies - Dragonsguard spies have noticed Plado’s openness with the Goblins of the Earth Splinter, and the Gloridax is concerned. The United Gloridax do not want the Goblins making any more advancements, at least for the time being. They have named Plado a person of interest. If he is not careful, the Dragonsguard will make him disappear.

Pastimes - Plado enjoys a good meal, and sometimes has a drink with friends, but he continues to be tormented by the death of his parents, for which he blames himself. His alone time is spent on his endless quest to invent a time traveling machine, but he invents less important things on his breaks.

Splinterlands is a collectible, digital trading card game built on the HIVE blockchain With each card being a non-fungible token, our players are owning their cards in a way they never imagined possible. We're talking about near-instant trades and free transactions as often as you'd like. It's an incredibly rewarding game, and a play-to-earn powerhouse of strategy, trade and community! You can learn more about all the aspects of Splinterlands rewards in THIS POST from the official Splinterlands Publish0x blog.