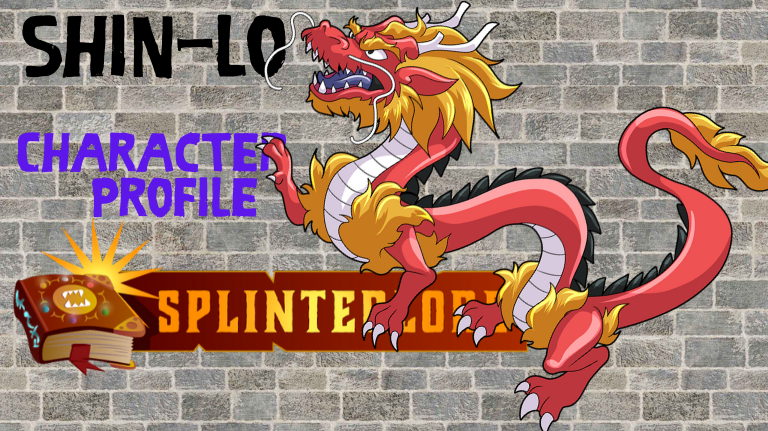 Far across the seas
An ancient pride vanishes;
Shin-Lo joins the fight 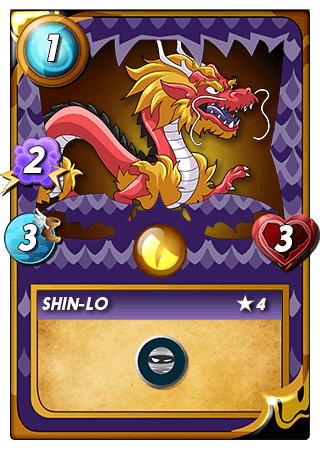 Size - Shin-Lo is one of the smallest Dragons, at only slightly larger than a normal Human. In battle he uses his size as an advantage, always positioning himself perfectly for each attack, which he executes with expert precision.

Lifespan - Shin-Lo is an old Dragon. The Dragons of the Splinterlands look like children to him, petulant children who know only how to pout and rage. At 600 years, not only is Shin-Lo older than most of them, but he comes from the same Dragon ancestors, a culture far more ancient than the Splintral Dragons realize. Some day (if they ever bother to learn to communicate with him) Shin-Lo will be able to tell them about where they come from.

Habitat - It is only socially acceptable for Dragons to live in two places in the Splinterlands: Draykh-Nahka and Mount Mox. While Shin-Lo is so quiet and sneaky that he could fit in anywhere, he chose to join the Dragons of Draykh-Nahka. He thought he would be accepted by the distant kin, but no one would rent an apartment to him and he held none of the seed coins of the Splinterlands. Now, Shin-Lo lives freely in the lush forest surrounding the Oasis of Centrum. As long as he avoids the sands, he is not threatened by any of the predators there. Plus, the weather is always nice.

Weapon - Shin-Lo is not the type of Dragon that wields weapons of a physical nature. His mind is his main weapon, and even most of his attacks are non-physical. While many magic projectile attacks have an eerie glow to them, Sin-Lo’s projectile is voidic in nature; it is not visible to the naked eye. The target may see waves in the flesh of the Dragon’s forehead and small bolts of black lightning shooting between his antlers, but they can never see the attack until it knocks their block off. Shin-Lo’s armor is comparatively weaker than other Dragons, but his agility and quickness are his best defenses.

Diet - Shin-Lo treats the farms of Draykh-Nahka with the same respect the Dragons have given him since his arrival in the Splinterlands: None. Night after night, he feasts on chicken, bunglo and hog. This has been his habit since settling in the Oasis, and none of the farmers have caught him. They are all still under the impression that they are being raided by the wild Lightning Dragons. The irony is that the High Council continues stocking the skies with Pegasus for the Lightning Dragons to avoid having their livestock eaten. A Lightning Dragon hasn’t raided a farm in months, but Shin-Lo continues to eat well.

Allies - Shin-Lo has not made a single friend since coming to the Splinterlands. The only person that has made any effort to get to know him is Camila Sungazer, the blind summoner, who is fascinated by his exotic speech and the wisdom in his voice. He allows her (and reluctantly, the other Dragon summoners) to call him to tournament battle, even though the idea of essence combat is still a mystery to him. Shin-Lo had an entire life, a multitude of friends and a large, loving family on the other side of the world. They were all wiped out in an instant, blinked from existence as if they’d never been. Shin-Lo believes with every fiber of his being that they are still alive somewhere… and he will find them.

Enemies - From Shin-Lo’s perspective, the Dragons are not only his greatest enemy, but the greatest enemy of the Planet. Since his arrival they have been suspicious, employing fear tactics like spying and bullying. These are not the calm, thoughtful Dragons of Shin-Lo’s homeworld. Somewhere in history, an offshoot of his wondrous and magical people was corrupted by some unknown evil. Could it be the same evil that destroyed his home and everything he loved? If so, Shin-Lo will find the evil and squeeze the life from it until it has given back everything that was taken from him.

Pastimes - It is fascinating to Shin-Lo to simply slither about the countryside and observe the strange curiosities of the Splinterlands. Everything is so incredibly different than things back home. Nearly all creatures are new, the plants are all different colors, and there is water everywhere, even in the Dragon Splinter, which they say is desert. Shin-Lo has spent a great deal of time learning to understand the common tongue of this land, but he has not yet let anyone know that he can. He has no plans to speak in the ridiculous language; if anyone wants to hear from him, they will learn Vujo.