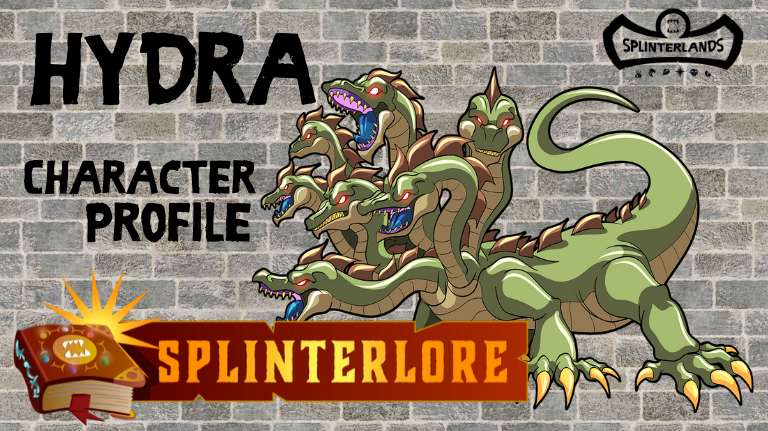 Hydra is a loathsome beast
And frightful as a foe.
Chop off a single head at least,
And in its place, two grow.
Chop off two, and four anew
Will quickly take their place,
Probably then leaving you
In pieces, and disgrace. 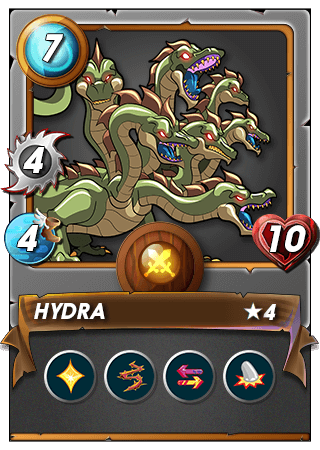 Lifespan - As far as anyone can tell, the Hydra cannot be killed. Hopefully, after a reasonable number of years of destruction and chaos, it will die of natural causes, but the Gloridax scientists who created it are not holding their breath. When one of its heads is lopped off, two more heads grow back in its place. Last time anyone was brave enough to count, the Hydra had thirteen heads.

Weapon - The Hydra is a kicking, clawing, slashing and biting monster that was created for sheer mayhem. Its claws can crush a Spineback Turtle into turtle soup, and between the spikes and swift retaliation, anyone who attacks it has little hope of escaping with their life. The Hydra may secretly wish that it could breathe fire like some of its Dragon relatives. The beast has no spells nor inherent magic, apart from its ability to quickly regrow heads when a head is lost. If all the heads were chopped off at the exact same time, most people assume the Hydra would be killed. An easier way to dispatch the Hydra may be to pierce its heart (assuming there’s only one), but it keeps that area of its body extremely well protected.

Habitat - The Hydra is a thick-skinned desert reptile that lives in the Sands of Draykh-Nahka. Fortunately, it doesn’t have the power of flight, or it would wreak havoc over all the Splinterlands. The Hydra has never made an appearance in the city of Centrum, but easily could if it so desired.

Diet - Its diet consists mainly of moxxie and wild bunglo in the sands, but the Hydra can and will eat anything when hungry. With all those heads, it’s hungry pretty much all the time, so it’s best just to stay away. Also, Hydra does not have to be hungry to eat. Each head has a long neck with a cavernous esophagus designed for preserving food until it is that head’s turn for digestion.

Allies - The Hydra (of course) has no friends. It is a wonder that the beast even allows itself to be summoned to tournament battle. The Hydra is wickedly intelligent and manipulative; anyone attempting to tame it or communicate will be lured closer and quickly eaten.

Enemies - Much to the dismay of the Gloridax, Hydra can be summoned by summoners from any Splinter. The Dragons have come to loathe this monster of their own making who often defeats them in battle. They especially hate the cackling, shrieking laughter emitted by the beast whenever it is the last monster standing in a tournament battle.

Pastimes - One unique skill of the Hydra is its ability to burrow through sand. It spends much of its free time creating elaborate reverse sand castles, which it gleefully destroys upon completion. Sometimes in the desert when it comes across the path of the Vigilator, the two spar beneath the sand in an almost playful manner that can go on for days. Kobold treasure hunters watch for the displaced sand from these bouts, for they often expose valuable relics of ancient battles.