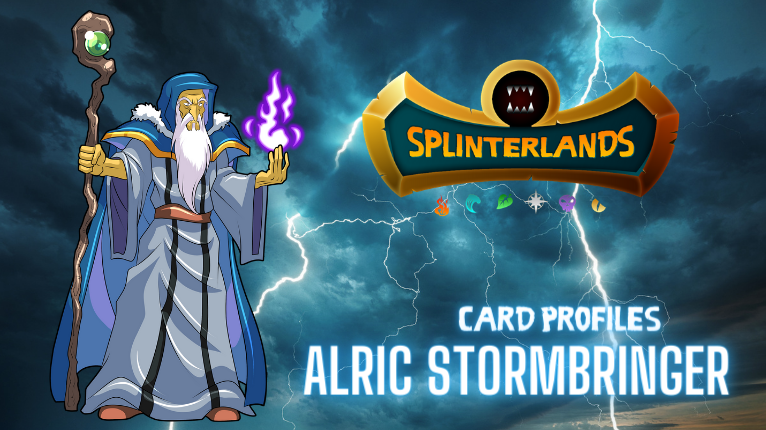 Carrying the knowledge of the things our fathers feared,
Your secrets are as num'rous as the fibers of your beard,
And one day when you're laid to rest and all you wrought is gone,
Though we'll be by your memory blessed, the storm, it rages on. 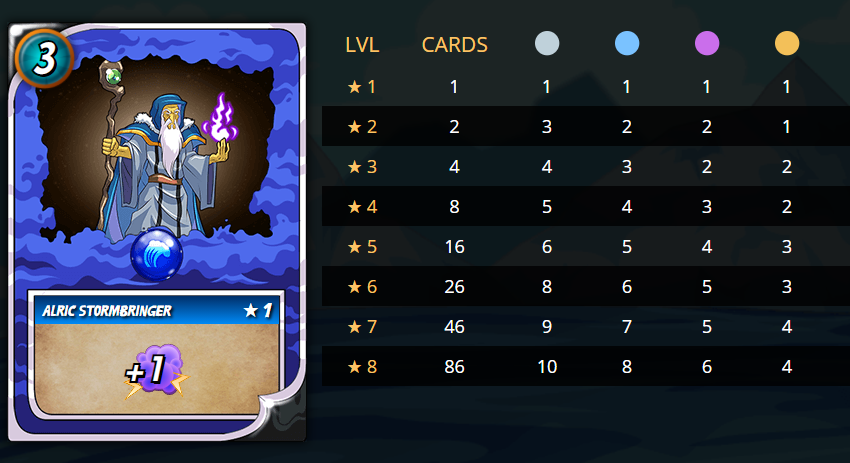 Size - Once upon a time, Alric was a very tall man who commanded attention and power from his peers through his physical stature alone. He was never overly strong or bulky, but like a wizard’s tower growing thinner the higher into the clouds its reaches crept. Alric no longer mentors students, but his pupils used to think of him as the tallest man in the Splinterlands, or at least the one that cast the greatest shadow. In his extreme old age, he has grown hunched over and lost most of his towering height, but he is still a giant in terms of the magical developments that he has contributed to the Splinterlands.

Lifespan - In spite of all the magical powers he can muster, Alric Stormbringer is a regular human man, and someday (sooner or later) he will pass on from the Splinterlands. This weighs heavily on his mind the older he gets. Some say Alric has lived for more than three hundred years. He never talks specifically about his age, other than to say that he is to admit that he is an old, old man.

Weapon - Alric’s staff is his only weapon, but he doesn’t need it to cast powerful spells. The staff is named Prosectico, which means watchful in a forgotten ancient language. Wrapped in the Prosectico’s wood is a petrified Dragon Eye, which never fails to intimidate the Gloridax leaders at Mount Mox. Alric can summon storms better than any sorcerer of ΛZMΛRÉ or Khymeria, and his targeted lightning attacks are extraordinarily precise and deadly. He is also able to bolster the magical attacks of those around him using a special type of dangerous chaos magic that he invented long ago. Since he is one of the greatest summoners in the Splinterlands, Alric rarely needs to fight his own battles. At his age, it’s difficult to say whether he’d even be able to hold his own.

Habitat - For most of the year, Alric Stormbringer lives in the City of Anenon. Breathing only air, Alric must leave the city during the Supra Tide, when it is underwater. During these few weeks, he stays with a rotation of his previous students in the islands of the Archipelago. He is also always welcome in his Mount Mox apartment, where the Gloridax always take good care of the old man.

Diet - Alric doesn’t eat like he used to. In his younger days he was an avid sea hunter. Now, his bones creak and his lungs just don’t hold air like they once did. At the advice of his doctor, Alric now consumes a diet rich in Kelp and Seaweeds. He misses meat dearly, but he feels he must extend his life for a few more crucial years to help the Splinterlands with what is coming.

Allies - Alric Stormbringer is the founder of chaos magic, but he has excellent diplomatic relations with most powers of the world. Old King Wilhelm of Lyveria is Alric’s long-time friend, but in recent years the monarch’s mind has been slipping. Alric Stormbringer is one of the only ΛZMΛRÉans who is allied with Lyveria. The Order of the Silver Shield welcomes the old summoner into their highest echelons, and the Ferexia teachers of the Torch learn from him a great deal about chaos magic. Alric even plays nice with the Gloridax, who are under the impression that he is on their side. Alric has always believed that “until someone becomes your enemy, they are your friend.”

Enemies - For hundreds of years through his incredibly long life, the Lord of Darkness has repeatedly attempted to recruit Alric Stormbringer into his Dark Eternal Collective. Alric was tempted when he was young, but as the years went on, the approaches were less and less welcomed. The Lord of Darkness is finally convinced that Alric will never join him, that he must instead be destroyed. Still, the Dark Lord sends spies to taunt the old man at the Moxian arena, teasing him about what might have been.

Pastimes - Alric is one of the few ΛZMΛRÉ sorcerers who can manipulate the weather. He can often be found standing on the top of a great cliff, arms outstretched, playing with the storm. The severe weather of ΛZMΛRÉ cannot be controlled; only played with. Still, this game is Alric’s greatest simple joy.