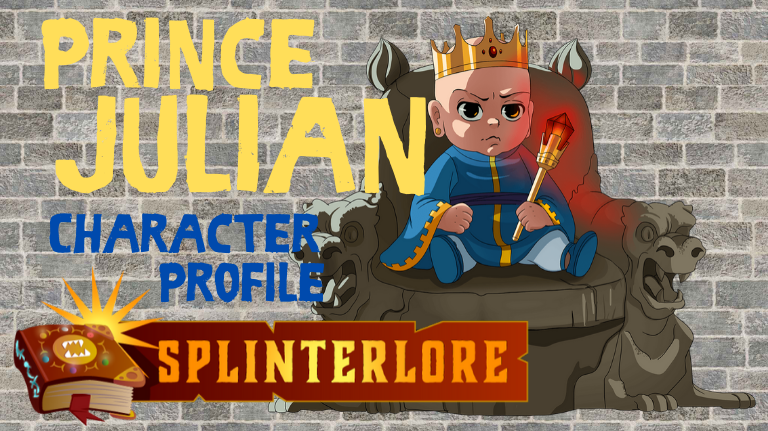 Patty-cake and Peek-a-boo
are games for childish fools;
PJ's favorite games are those
Where he makes up the rules. 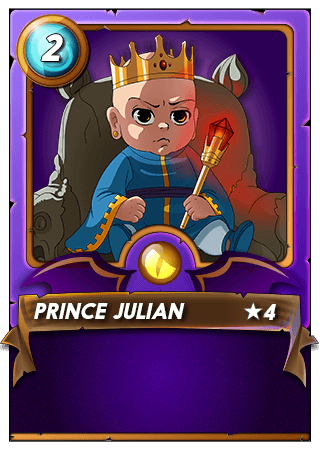 Family - Julian was hatched into the Huriax clan, one of the most powerful families who still carry the Fire Blood. He will be admitted without question into the finest Gloridax schools, not because of his uncanny brilliance, but because of his family connections. Vizier Gyortius, who raised the baby for years as an egg, sees Julian as his prize project. The Vizier believes that Julian will one day rule Splinters, or perhaps even greater worlds.

Size - Like most babies, Julian’s size changes from one week to the next. Teams of tailors and cobblers work tirelessly to ensure that Julian is able to stay at fashion’s forefront with new tunics and such, always in the color of his choosing. Two of his bootmakers have already been executed because by the time they completed the baby Prince’s riding boots, he had already outgrown them.

Lifespan - Even though Prince Julian is a baby today in the Splinterlands, he has already lived a long life, inside the egg from which he came. The egg was laid by the Wisdom Dragon some ninety years ago, before she died of extreme old age. The egg was to be her great masterpiece, a Dragon ruler to bring peace and prosperity. The Wisdom Dragon put the egg under a special spell (which some say killed her) that allowed the baby Dragon to remain in the egg until it was needed, in the fullness of time.

Habitat - Prince Julian lives in a mansion on the Draykh-Nahka hillside, overlooking the city of Centrum. It is one of several estates owned by the Huriax clan, and Julian lives there alone with his attendants. His throne room (which was designed by him and built entirely to his specifications) is a vast, dungeon-like room. His throne is adorned with grotesque stone gargoyles, even in spite of their reputation for bad luck in the Splinterlands. When he first slept outside the egg, Julian was wracked with terrible nightmares. The nightmares never ceased, but Julian has embraced them, using their frightening characters in the art and architecture of his home.

Weapon - The ceptor carried by the Baby Prince a wizards’ weapon of great power. The ruby at the ceptor’s emerged from the egg with Julian. He was clutching the glowing red stone in his adorable little fingers, and when the nurses tried to take it from him, he bit at them ferociously until they gave up. Ever since, Julian has refused to hand over the ruby to anyone. When he ordered it to be crafted into a ceptor, he stood by the entire time, watching with the concern of a mother for her child. When the ceptor was complete, the baby snatched it back and has never let go of it again.

Diet - Julian does not have any of the physical appearances of a Dragon, but he came out of the egg with sharpened teeth already sprouting from his gums. Within the first few weeks, he was eating rare bunglo steaks with no difficulties. Like a Dragon, he loves meat. There were however, a few savage and bloody incidents before the Prince understood that eating his attendants was not okay.

Allies - Prince Julian has a certain spark in his eye, a spark that says “I’m only in this for me. Still, he shows obligatory affection to members of his family when he feels socially compelled to do so. Vizier Gyortius thinks of Julian as a tool for his own success and power. But Julian knows the Viziers are the old way. His abilities have only started to grow, so he will bide his time. Soon, he will be grown.

Enemies - Spies have been sent by the Suam Khepri into Julian’s house, but each one has been quickly discovered. The young Prince has a keen ability to detect lies and deceit, almost as if those are his territories. Julian knows who is sending the spies. Even during his ninety years in the egg, Julian was aware of the goings-on in the Splinterlands. He knows of the uprising and of the rebellions against the Fire Blood. He also knows why he has finally been brought into the world. Will they be ready?

Pastimes - Unfortunately for his attendants and jesters, Julian is rarely satisfied with childish entertainment. During performances, he usually sits on his throne with a strong look of “I am not amused” written across his face. This creates a vicious cycle: The performers become afraid of being put to death, which makes them even less entertaining... which makes Prince Julian even more angry.