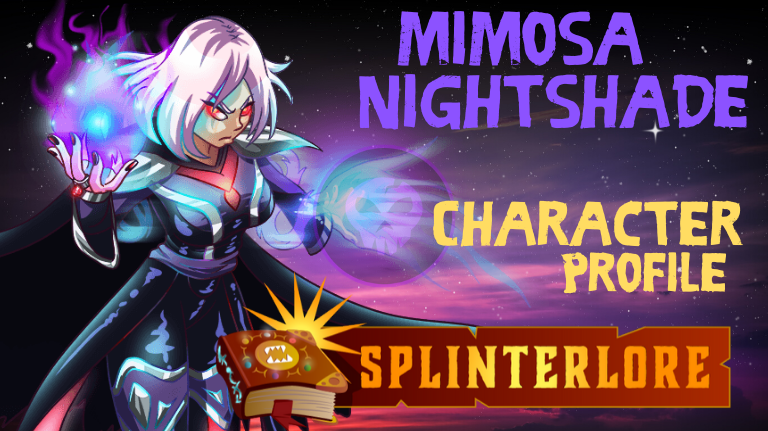 -the Lord of Darkness 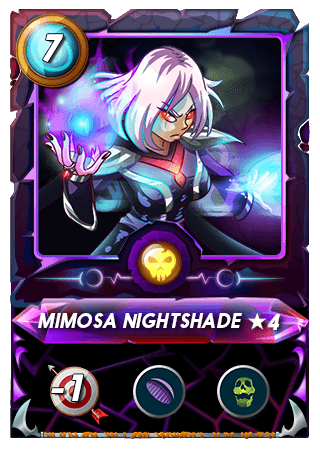 Size - Mimosa is a small girl, standing just shy of five feet and weighing little more than a common Goblin. When she was taken into the Shrouded Palace, Mimosa’s physical growth slowed down, but her magical growth was wildly accelerated.

Lifespan - Mimosa is only 14 years old, but having grown up on the streets of Beluroc, she has already had a litany of ghastly life experiences. Now that she has found her home with the Dark Court of Mortis, Mimosa has already signed the Dark Contract, and although she will be allowed to live out the remainder of her natural life, she is already eager for her next existence in which she will live forever as a Dark Eternal sorceress.

Weapon - Mimosa Nightshade carries no weapon, but she can imagine no situation in which she would need one. She is naturally able to control intelligent minds, especially those of men. As a little girl fending for herself on the cruel streets of Beluroc, she had to make use of these talents to simply survive. One of her biggest scores on the streets was a magical ring that Mimosa has named Inita. The ring was given to her by a wealthy collector leaving the auction house one evening, against his will of course. At first she simply thought the ring was pretty, but Mimosa quickly learned that Inita amplified her abilities and allowed her to do previously unimaginable things. With the legendary ring’s help, she can produce a dark shockwave attack that stuns and sickens her opponents.

Habitat - Of all the places Mimosa Nightshade has lived, she likes the Shrouded Palace of Mortis best. For years, she lives on hard streets. Her friends were the rats and her victims were those with homes. For a time she had lived in the forest, but after discovering she was unable to control the minds of predatory animals, she went back to the squalor of Beluroc. Then she had been imprisoned for several months by the strange Wizards. That had been the worst of all. Now, in the company of the Dark Enchantress, Mimosa receives everything she wants, so she is happy.

Diet - Foods for the living are scarce in Mortis, since 95% of the population are Dark Eternals. Since her arrival, Mimosa has been fed a diet rich in foods processed with dark matter, the key resource of the Death Splinter. They have had interesting effects, such as turning her brown hair to a bright white, and causing her to grow always thinner, no matter how much she eats.

Allies - Mimosa has lived her whole life trusting no one The Lord of Darkness and his Queen may have taken her in, but they are still a long way from earning her trust. Mimosa only looks out for herself; she is her only ally. The Lord of Darkness recognizes that she must constantly be rewarded, allowing her to see her cooperation as selfish gain.

Enemies - In the same way that she has no friends, everyone is Mimosa’s enemy. Her eyes blaze with hatred when she comes to do battle at Mount Mox. She especially hates the Wizards’ Council, the arrogant group of old men that kidnapped, tried and imprisoned her on the side of a mountain with no explanation. Fortunately, the Lord of Darkness rescued her, and Mimosa will one day take her revenge on the Wizards’ Council.

Pastimes - Mimosa’s mind control powers are utterly useless on the Lord of Darkness and his Warlocks. Sometimes they work ever so slightly on the Dark Enchnatress, but that is because she has held onto a small shard of her living self. Mimosa can only control the minds of the living, and since there are no living around, a great void has developed in her life. The Dark Lord does whatever he can to make her time more enjoyable, and example of which are The Skeleton Games. The Skeleton Games are put together entirely for Mimosa. Skeletons are brought from far and wide and placed with Mimosa in a large enclosed room. Then the poor girl is able to experience a couple hours of exercise (and pure joy) as she destroys every last skeleton with her magic.

History - Years ago, Mimosa was a poor shivering child, all alone in the alleys of Beluroc. She was five years old. She remembered her name, but little else. Mimosa’s parents had been vaporized before her eyes in a great battle of Witches, and she was now abandoned, an unwanted child left to fend for herself on the cold streets of a dark world.

Even as a small girl, Mimosa realized that she must find gold to buy her food, so she began to beg from passers-by. This is how she discovered her strange powers of coercion and manipulation. Mind control came quite naturally to young Mimosa, and by seven she could easily convince a wealthy Beluroc art dealer to empty his savings into her wagon.

As Mimosa grew, so did her fascination with the most forbidden types of magic. She had great respect for books of magic and their sellers, never stealing from the dealers of tomes. She spent several years absorbing, with the greedy mind of a child, the most ancient texts she could find and amassing a valuable collection of dark books. By thirteen, Mimosa had all but mastered the forbidden art of necromancy. Still living on the streets, she began playing ghastly tricks on the citizens of Beluroc to practice her arts and pass the time. These horrible tricks attracted the attention of the great Wizards’ Council, and Mimosa Nightshade was brought before Archmage Arius for judgement.

It was determined unanimously by the Council (before Mimosa swayed the minds of three of them) that she was far too dangerous to be left to her own devices in the Untamed Splinterlands. Archmage Arius locked her away in a magical prison on the dark side of Mount Mox, where she could continue to study without causing any mass destruction. The Wizards’ Council thought the problem was solved, but the Lord of Darkness had other plans.

After only a few weeks in her prison, Mimosa was sprung by a band of Warlock spies, hired by the Lord of Darkness, and brought to Mortis. She was taken to the Shrouded Palace, where she received a royal welcome and was lavished with gifts and attention. The Dark Enchantress nurtured Mimosa’a abilities, and soon after, the Lord of Darkness had convinced her to sign the ever-binding Dark Contract. Although she still has a long life ahead of her, Mimosa Nightshade will now live to serve the Death Splinter, and upon her death, her soul shall be rendered into its true Dark Eternal form. Mimosa has finally found her true family.