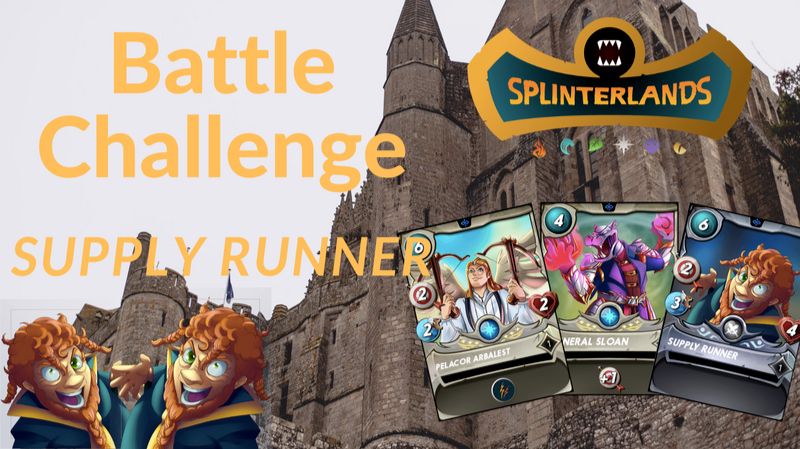 We have a new Battle Challenge and this weeks theme is the Supply Runner.

I'll go over my thoughts on the card, my strategy in this battle and how I used Supply Runner particularly in depth down below, but if you want to skip right to the action: Here's the full battle. Every army should have them, every artisan should hire them, and every noble should own one. If you need absolutely anything, then a supply runner will get it for you. For their size they can carry vast amounts, they’re incredibly fast and they’ll even defend your deliveries with exuberant relish. Not only that but their expertise with the catapult they carry is renowned across the land. Countless confrontations have been recorded in the history books of these hired hands coming to the aid of convoys beset by bandits or roaming patrols attacked by the enemy. They have swarmed the foe, firing their shot down upon them and running havoc amongst their ranks with their incredible speed. Most of these forays have ended with the enemy fleeing, but those that did remain and fight didn’t last for long...
(Beginning from the Splinterlands Lore) Making it a very good support card overall. It's stats are solid, with decent Health, Speed and Damage. In my opinion the card is most impactful at level 5 and above, where it speeds up the entire team, as Speed is key in attacking before your opponent, eventually taking out a monster before it has the chance to do anything and helps with dodging and not getting dodged.

I personally like the card a lot for those exact reasons and either play it with Kelya, for even more speed, Quix the Devious, again for more Speed or General Sloan who gives the card more attack.

The rules were Explosive Weaponry and Equalizer with 30 mana and Fire, Life, Death and Dragon available. This was set to be a high damage, all out battle.

With everyone having Blast I like to go for high damage and speed, trying to attack first with as many monsters as possible, taking out enemies before they get to attack. Out of the four available splinters my strongest are Life and Dragon. I felt like I could get the most damage with Life, so that's what I went with.

For my Tank I chose Chaos Knight, because of his Shield ability, trying to reduce the incoming damage. Soul Fiend behind her, to absorb the Blast damage with it's increased Health from Equalizer. For the middle spots I went with Time Mage, because of the Slow and because it can attack from the first position and Doctor Blight for the Affliction and Poison, to counter healing which is very strong when all monsters have high health. Pelacor Arbalest as my main damage dealer with the Genral Sloan buff in the second last position to make sure it won't get pulled into the first and can attack as many rounds as possible but not quite in the last spot to protect it from direct sneak attacks. And finally Supply Runner for the Speed buff and damage as well.

With everyone having higher health from the Equalizer rule I felt pretty safe without having any additional support like Protect, Repair or Heal and went full damage and speed. My opponent went with a Quix team with lots of magic damage and a Supply Runner in the back as well. This is bad news on first glance as Quix counters both my ranged damage buff from Sloan and my Speed tactic directly. Luckily we both have the same amounts of Slows/Speed buffs, so at least I'm not slower than them.

As we both have no Sneak, Snipe or Opportunity cards everything hits the tanks. I have a total of 12 damage, while the opponent has a total of 11 damage, but because my Chaos Knight has the Shield ability it doesn't take all of that damage, staying barely alive while their Void Dragon dies and the Magi of Chaos gets pulled in first position with only one health. There's also no targets for the Spirit Hoarders Triage which is good. Round two follows the same scheme with me starting and taking out the Magi of Chaos. Chaos Knight and Soul Fiend die but so does their Spirit Hoarder and the Life Sapper takes quite some damage, even though it's Life Leeching for 2HP every round. Time Mage also gets a very nice dodge against the Soul Strangler. Round 3 is a back and forth of attacks where we just can't quite finish the Life Sapper as it leeches back in between attacks. On the other hand we're also not taking too much damage and Time Mage gets yet another dodge against Soul Strangler. No Poison hits from Doctor Blight though which feels kind of unlucky. Time Mage attacks first finally taking care of the Life Sapper. Their Supply Runner gets off an attack, but it's not lethal. We then kill the already damaged Soul Strangler and pull Supply Runner in the first position where it can't attack. At last Doctor Blight hits a Poison which is just enough to take out Supply Runner by the start of the next turn (not that we needed that, but ok). My tactic did work in part. While getting both a nerf to my damage and speed I still managed to be slightly faster than them, going first multiple rounds and getting two good dodges. I also had more damage and a better tank which was very important and ensured that my ranged monsters didn't get pulled in first position.

I think Supply Runner did a fantastic job, even though his Speed buff was negated, because the opponent brought one themselves, he dealt a lot of damage and often went before other monsters due to his high base Speed.

Finally some of you may have noticed who my opponent was. For those of you who don't: it's Luke Plays To Earn a YouTuber and content creator for Splinterlands. Since I watch a lot of his videos having a face to your opponent is especially fun and I really enjoyed this battle!