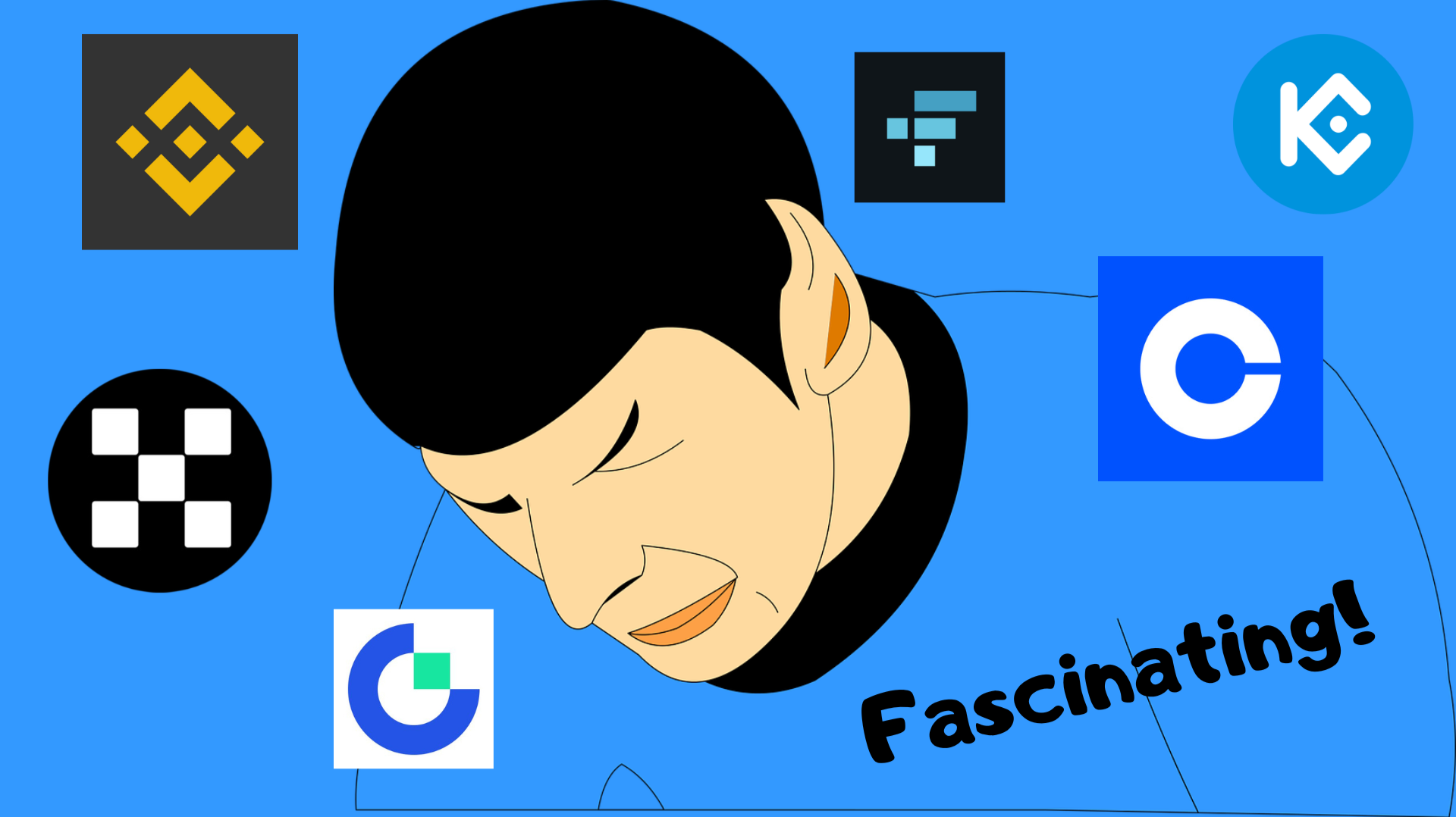 Competitive map of the CEX sector and its possible evolution

Talking about strategy in a sector as young as centralized cryptocurrency exchanges seem risky.

Most companies have not completed their first ten years of operation, the number of competitors is extremely large, and the values ​​we have to make a careful analysis are often erratic when they are not completely absent.

However, it is interesting to observe closely how the sector is taking shape, especially in terms of the most important competitors, specifically, the first six competitors.

How is the competitive position of a company measured? Because of its turnover. There is a lot of marketing quackery, especially from within companies that always communicate with their customers by saying “we are the leading company”, without specifying what to be a leader means.

The only way to express leadership without any doubt is by identifying the company that has the biggest turnover. The leader is the one with the biggest revenues, and that's it. All other expressions of desire for leadership are wordiness.

In the case of a sector as young as centralized cryptocurrency exchanges, the only way we can tell that we are leaders is by looking at daily trading volume. That would be the turnover of the company.

So, the one with the most volume is the leader, in our case, Binance.

Any industrial sector, after many years of operation (many more than ten), tends to form certain patterns of company positioning. Specifically, the first six competitors have an extreme relevance to the behavior of the sector.

Every sector tends to have a “leader”, who is the one with the biggest turnover, two close “challengers” who want the leader’s position, and three “followers” ​​who are located below the two challengers, and who are followed very closely by those below them, who are usually called "guerrillas".

So the leader (tier 1), the two challengers (tier 2), and the three followers (tier 3) are the first six competitors, and the most important in the sector, because they are the ones who manage innovation, rules, styles, legislation, marketing, communication, in short, are the companies that say how the sector is going to progress in technology and market. Guerrillas (tier 4) can bring a lot of innovation, of course, but if the market intelligence of the first three tiers picks up a defining innovation in tier 4, then that guerrilla will most likely be absorbed.

Typically, an industrial sector does not have 537 competitors, except for hamburger restaurants. This is the result of the sector’s youth, which still allows, and will allow for quite some time, a large number of entrants, especially because the barriers to entry are very low.

The normal thing is that an industrial sector has those six big players, and below that there are twenty serious competitors, the guerrillas, who, at the moment, do not have the resources to gain access to a greater market share.

According to figures published by CoinGecko, the top six competitors by daily trading volume are shown in the chart below. The data was taken on August 3, 2022, and varies every day, although the pattern remains. 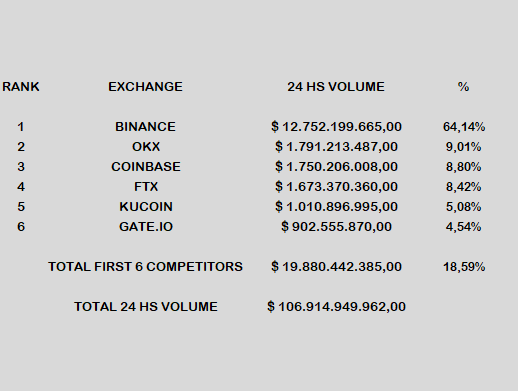 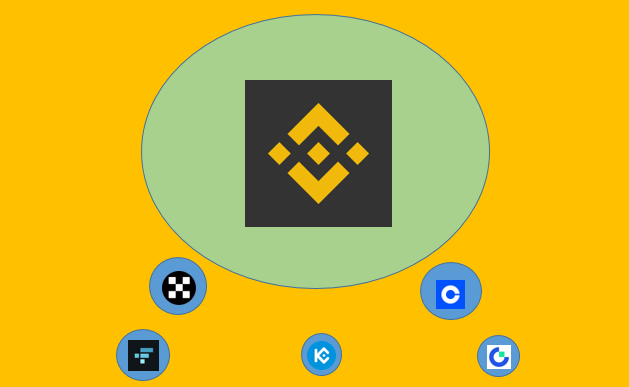 If we follow the accepted patterns of competitive strategy, looking at this figure, we can mark several things.

First, when a sector is mature, normally the combined turnover of the top six competitors is around 60% of the total turnover of the market. We see that here it does not even reach 20%! This means that the sector is still in the initial biblical chaos of genesis. As cryptocurrency adoption grows, the sector will grow. But at the same time, most of the more than 500 guerrillas will disappear, either because they did not survive the primordial chaos, or because they were swallowed up by the neighbors of any of the tiers, including the guerrillas themselves. In general, the largest number of mergers and acquisitions take place among the guerrillas of this fourth tier.

Second, we see a very big difference between the leader and the other five competitors that make up the élite group.

This leads us to take a closer look at the shape that different industry sectors tend to take, precisely because of the behavior of these six competitors.

According to their strategic conformation, the industrial sectors are divided into 3 types of structure: monopolistic, oligopolistic, and perpetual battle.

Here we show the characteristics of each structure. The radius of each circle is proportional to the turnover of the company.

We clearly see that the CEX sector is totally monopolistic at the moment, in the hands of Binance, although we must remember that the sector is still too young to make an accurate analysis.

According to the level that a company occupies, its strategy and its tactics should follow patterns defined by the competitive strategy.

Just defend itself. Never attack, because it has no need. But if you have two close challengers, your life is not going to be easy, because these two want your position. In our case, we see that the two challengers are still a long way from catching up with the leader. In order to successfully attack it, they would need to grow very large. The undisputed leadership of Binance does not seem very committed at the moment.

Attack permanently. Level 2 of a competitive map is the bloody level, the level of living permanently at war. The number 2s are very aggressive, and they not only attack the leader, but also attack each other, and also, in order not to lose training, they attack the number 3s and everything that passes nearby and moves. If they don't, they may lose their position to other No. 3s, if they want to continue moving up the competitive ladder. This is especially true in such a young sector, in which the 5 competitors of the leader have a very similar volume. It is not common for a number 2 to be successful in its battle against number 1, and it usually spends its entire existence trying to do so. But you should always count on number 1 falling asleep. (This often happens in chess, it’s incredible to see how Grand Masters continue to make blunders). In any case, with the current pattern of the sector, it would seem that the only way for the number 2s on this map to grow is through a series of mergers and acquisitions. We will surely see many well-known names merging to compete against Binance.

What should the number 3 do?

Level 3 is the “smart” tier of a sector. Typically, these three companies have occupied a niche that, at least for now, is of interest to neither the number 1 nor the two number 2s, nor the other two number 3s. Within that niche, the companies 3s are relatively easy to develop and continue to grow, only receiving attacks from a few tier 4 guerrillas. For example, KuCoin has successfully minted the so-called brand companion “The People's Exchange”. Everyone associates this phrase with KuCoin. At the same time, very few people remember any phrase related to another player in the CEX sector. It will be very difficult for any company to take away from KuCoin its flagship phrase, nor its quality of being the exchange that lists the newest coins in its portfolio. However, KuCoin does not seem to be a company that is satisfied with being number 3, so it will surely face the tough battle that means taking one of the positions of number 2 and from there attacking the leader if that is its vision. Given the current competitive map, the only chance KuCoin and the other No. 3s have is mergers and acquisitions as well. It is to be expected that the number 3s in this sector will acquire many number 4 companies that will leave their guerrilla dream to enter the nightmare of the big leagues.

What should number 4s do?

The smartest thing for a number 4 is to make itself "palatable" so that some company that occupies one of the upper levels gobbles it up. It’s extremely difficult for a number 4 to climb the pyramid, having to first achieve a higher turnover than a number 3. Normally a number 4 in this sector is a company that has very little money and a very small team, so the battle is very complicated. You can't dream that “if you have a very good product, the market will take care of finding you”, because that fable is for children's books. You can't grow without money, especially in the technology sector. But be careful, when you look at the name of some tier 4 players, you see illustrious companies. As the CEX sector is very young, large restructurings can still be expected, especially at levels 3 and 4.

We are facing one of the sectors that is going to grow the most on a global scale in the coming years. Some sophisticated cryptocurrency enthusiasts will still prefer to trade using DEXs. But mass adoption can only be expected through CEXs, with which the sector is going to receive a massive flow of fiat money that today remains totally alien to the crypto sphere. This implies an explosive business, which has attracted a large number of players, who continue to join every day, stimulated by the very low barriers to entry in the sector.

It is at level 3 and level 4 that you see the most creativity in terms of product because levels 1 and 2 are engaged in the daily battle to maintain position or move up. I always said that a level 3 and/or 4 company that found a good market niche, with a loyal target, and with good protection to resist attacks, has a very good turnover, earns a lot of money, and can enjoy doing business, without the daily constraints that higher levels demand. But of course, the temptation to grow that the capitalist system has put into our heads since we were children, often makes that a very good business, for the desire to grow, turn into a disastrous bankruptcy. Anyone who understands something about business and sport knows that one thing is to compete, and another thing is to compete in the big leagues. For example, in the case of CEX, notably, we see a lot of FUD these days as attacks, rude and clumsy, but attacks nonetheless. That's normal as you go up.

My vision is that the sector is going to resemble in the medium term, let's say 5 years, the pattern shown in figure D above, that is, the one of perpetual battle. Six great players with quite similar volumes are going to coexist, who are going to fight a fierce battle, not to grow, but to maintain their position. We do not know the names of those players yet, because they will be the result of a series of mergers and acquisitions between the large number of competitors that the CEX sector has.