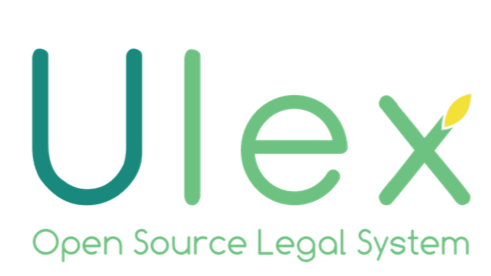 Ulex is an open source legal framework for what has come to be known as polycentric law. States and governments generally have monopoly over law (hand in hand with the monopoly over the use of violence and force which is the essence of the state as a polity) which is neither always adequate nor incorruptible, in addition to not designed/equipped to address many issues and articulate itself in many domains outside its reach. Ulex is also designed for such special jurisdictions where mainstream law doesn't apply, like digital and startup communities, cooperatives and special economic zones.

Law is important in that it is a set of rules which govern behavior and resolve disputes. One many actually be surprised to learn that the World Bank considers the rule of law to be the biggest source of human wealth. Crypto-governance has also always been a hot subject of discussion and debate, from Nick Szabo and Vlad Zamfir's opposing views on the matter to Vitalik's having written extensively on the subject and systems such as Tezos and its success being fundamentally underpinned by its non-forkable governance model of changeable formal procedures as carried out by the stakeholders in the system. And cyberspace, no doubt, having always to some degree or another constituted a domain and jurisdiction of its own, transcending borders and nation-states.

According to the world bank the biggest source of human wealth is actually the rule of law, which it defines like this: “This measures the extent to which agents have confidence in and abide by the rules of society. It encompasses the respect of citizens and the state for the institutions which govern their interactions.” Alhough of course not the only measure of good government, “it captures particularly well some of the features of a country’s social capital,” also associated with “generalized trust.”

Thus, Ulex introduces a legal framework which suggests that legal systems and services should be chosen and agreed upon by mutual consent and that there can be many such frameworks, variations of them and competitive legal service providers instead of a single monolithic source of law imposed upon in a top-down manner. The video below gives a quick introduction to how this works on the basic level.

As a flag-free open source legal system for special jurisdictions, open source in this case doesn't necessarily mean machine executable code, but rather a set of rules under which a legal system can operate and the goal of an open source community in this case is one actively involved in building and trying out different variations of Ulex in various different circumstances and case scenarios where traditional legal systems don't apply or are not equipped to address.

In “Your Next Government?: From the Nation State to Stateless Nations” (2018), a handbook of polycentric law written by Ulex founder Dr. Tom W. Bell of Chapman University Law School, Ulex is defined as:

"In very general terms, Ulex protects personal and property rights with efficient and fair dispute resolution processes and rules, encouraging economic growth and promoting the rule of law. Ulex applies not by sovereign command but by the mutual consent of contracting parties, and issues from no single country, but instead draws on legal traditions from across the globe. In these ways Ulex differs from the legal systems run by traditional nation states."

The final Ulex framework is said to be based on Holochain's peer-to-peer architecture for running distributed social apps which appears to be ideally suited for the purposes of something like Ulex, allowing to easily set up and integrate aspects and functionalities specific to the domain. (Existing blockchains with their associated costs, monolithic nature and global/network-wide notion of consensus not as well suited in this case.)

Ulex follows in the steps of open source operating systems like UNIX, GNU and Linux.

But where those run computers, Ulex organizes and runs legal systems.

In both cases, users freely download, use and modify rules without any fees incurred ("free speech, not free beer").

Why Do We Need Ulex?

If established state governments are badly government, corrupt or unjust, people should have the ability to choose different legal systems among themselves. Ulex is such legal framework for efficient dispute resolution and promoting the rule of law not by forcing/imposing it, but having it adopted by the mutual consent of those chosen to be governed by it.

The core/kernel of Ulex is v1.1, but being open source it can branch in a myriad of ways. Read more about it here: Ulex v1.1 Documentation

Ulex v1.1 has procedural rules (the process of how to make/articulate rulings) and substantive rules (how are the facts of a case to be handled specifically).

The procedural rules are strict and do not change, while the substantive rules are adaptive, user-generated and can have various branches adopted by appropriate users.

1. Judges: Each party selects a judge, who then collaborate between themselves in selecting a third.

2. Remedies: The judges choose a remedy proposed by one of the parties.

3. Costs: The losing party covers the expenses of the winning party's legal costs.

The default substantive rules of Ulex v1.1 derive from the American Law Institute's Restatements of the Common Law, the Uniform Law Institute's Uniform Business Organizations Code, and other legal rule sets, each of which are standard best practices for international and private law. It combines time tested and trusted rule sets from private and international organizations in a robust but flexible configuration. Its meta rules make sure that all the different components work together without contradiction and to practical effect.

The general idea of Ulex has existed for a very long time (in the form of English Common Law, for example), although the technology of Ulex has existed for only the last couple of years. The founder of Ulex is Dr. Tom W. Bell of Chapman University Law School. Many organizations came together to create the Ulex Open Source Community, including the Institute for Competitive Governance (where Dr. Bell serves as Academic Director) and the Startup Societies Foundation, a 501(c)(3) nonprofit group.

The Ulex Open Source Community App was created to facilitate collaboration and discussion and foster the building of real world applications of the Ulex legal system/framework. The community was established in April 2018 with a crowdfunding campaign which finances the Ulex Application and bounties. Use the forums/boards for discussing important issues and subjects, post projects and ideas to create tangible real-life applications and/or host bounties to reward community members who develop and further the mission of translating Ulex into the real world. The end goal of the group being the setting up and establishment of governance zones and have businesses adopt the Ulex system, setting a precedent for non-governmental legal systems which effectively resolve disputes and inform collective governance.

Ulex can be run by either moving to a jurisdiction which has adopted it as a legal system or, in what may amount to the same thing, form mutual agreements with others to have Ulex govern your legal relations. While the first remains for the moment only a theoretical possibility, the second requires little more than a handshake. A formal agreement should have a choice of law and forum clause along the following lines: “Ulex 1.1 governs any claim or question arising under or related to this agreement, including the proper forum for resolving disputes, all rules applied therein, and the form and effect of any judgment.”

The Ulex detailed documentation describing the rules and principles that constitute it is found here.