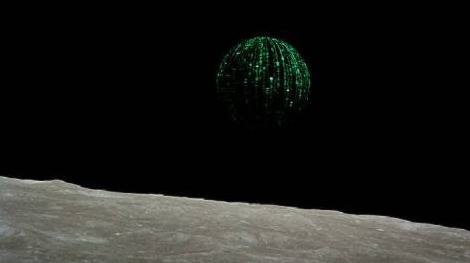 Confucius said "the whole is greater than the sum of the parts" or its modern version "one plus one equals two while one and one rarely make two". The sum of our resources is finite while the virtual data seems endless.

Michel Serres (French philosopher) and his contemporary guide “Petite Poucette” has a motto “Now, taking the world in hand” with his smartphone to communicate with connected networks while moving with his Geographic  Information (or Intelligence) System (GIS) assisted by its GPS. Acronyms are so important in this world where distances tend to cancel each other more than to shorten, GIPSy seems suitable in this case. The "Petit Poucet" (Tom Thumb, the brother of Petite Poucette, the one who sows his small stones) is a GIPSy therefore, does not stop sowing small virtual stones (cookies) to mark its passage, in a digital world where reserves are depleted because resources are finished.

Indeed distances and borders disappear with the arrival of these new artificial networks called "social" or also designated as "Noosphere" which logically expand the notion of natural networks of the globe that the ancients grouped in their doctrine of the four elements ( Water, Earth, Fire and Air) and which the moderns designate by "biospheric" and "geospheric" systems.

A step has been taken with the digital revolution thanks to the contraction of our time space; communication distances are narrowing, 2D screens are more and more efficient in representing our 3D space in record time.

But this world is also in crisis, a crisis which is intrinsically anthropogenic as a disaster is natural. In the first case, this could be called progress (scientific and technical) in the other, the evolution of the earth and of life ("Biogée" dear to Michel Serres). The man is not central in this world, Galileo then Darwin teaches us that we have suffered disasters since the famous"Big-Bang" by successive crises. So is there another danger waiting for us, a possible digital crisis linked to a surplus of "Big-Data" in the "Big-Sphere"?

How did we pass from one real world to another virtual one ? Comment sommes nous passer d'un monde réel à un autre virtuel ?