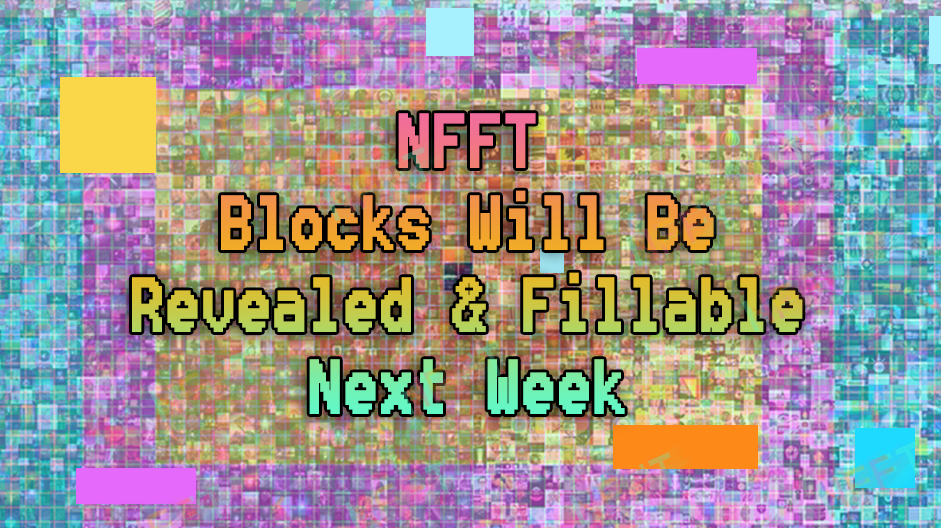 NFFT Blocks Will Be Revealed & Fillable Next Week

It has been a rollercoaster journey, and things are about to pick up even more steam! The day we’ve all been eagerly awaiting, the moment of discovery has arrived! On April 23rd, we will be hosting the Big Reveal. This means everyone who purchased an NFFT in the blockverse will find out the rarity of their block. We’re excited about this and perhaps a little anxious, and no doubt you are too.

When we launched NFFTs, we weren’t sure what to expect. But with 400 unique wallets joining the Blockverse in less than 12 hours and 70% of all blocks sold within the same day and instantly decentralized, we realized this was going to be big.

With your support, questions, and feedback, we’ve been able to clarify our next steps and plan for Phase 2, but more on that later on!

When we first came up with the Blockverse, we wanted to ensure that everyone in the community had an equal chance of owning a rare block. We designed the sale to ensure purchased blocks would be assigned randomly, and no one would know the rarity of their block or location until the Big Reveal and the end of the Block sale.

With blocks in seven tiers ranging from Common blocks to the rarest of them all, Genesis blocks, there was no better way to ensure fairness than with this randomization.

So far, it has worked out brilliantly well, and we are almost ready to unveil the Blockverse.

Soon, you will know the rarity of the blocks you own and unlock their “fillable” quality.

No matter which block you get, owning an NFFT block alone is a great thing. NFFT tokens are the next-gen thing in cryptocurrency, a significant development on the original NFT smart contract with its fillable functionality. Have you ever accidentally used a permanent marker on a dry erase board? Well, that’s the NFT; once it’s there, there’s no removing, and you’ve ruined the board. While the NFFT easily comes off because you used the Expo marker.

After next week’s Big Reveal on April 23, the blocks you purchased will become fillable. So start thinking about what you’d like to fill them with. The sky’s the limit of the kind of content you can feature in your block. Block owners can customize each block’s title, URL, image, description, and more as a reminder. 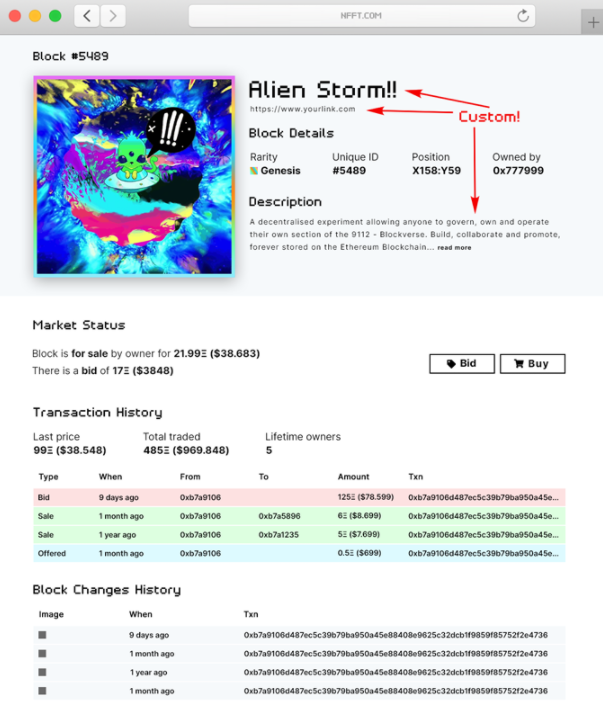 Once the Big Reveal takes place, we will prepare to sell off the remaining unclaimed NFFT blocks. The blocks will be available for purchase at a fixed rate, depending on their rarity. Prices will be posted on the platform so you will know the block’s location in the Blockverse before you make the purchase.

Excited? Anxious? Impatient? So are we, and there’s so much more to come! The decentralized community group is getting everything for the most anticipated event - the Genesis Block Public Auction will be the culmination of NFFT’s phase one launch and officially move us into Phase Two.

Keep your ear to the ground and stay tuned for the latest developments. Announcements will be posted on Twitter and Discord, so make sure to connect with us there! Finally, remember this is a community-driven effort; please engage with all polls and votes on the future direction for the Blockverse!

Our invention is the NFFT, which stands for Non-Fungible Fillable Tokens. NFFT is the next evolution of NFTs. This is a special type of NFT that allows the end-user to fill their Block with any image or artwork. The owner of each NFFT can also set a URL f

NFFT Blocks Will Be Revealed & Fillable Next Week