A few weeks ago I gave my initial impressions for Rising Star, a music career simulation game on the Hive blockchain. Since then I have been playing regularly, running a number of missions everyday.

The missions take real life time, and also use up in-game Energy, which replenishes fairly quickly, so in order to make the most of your options, you need to keep up with the game throughout the day. I certainly don't maximize my potential time on the game, but I do check in several times a day.

When I left off last time, I had been gifted a free card pack and discovered a Female Rapper card, which increased my permanent fanbase significantly. This allowed me to move up in the world and forget about playing for change on the street corners. Instead, I could run the Midweek Support Slot mission on a regular basis. And I did.

After a while, I had saved up quite a few Starbits and went looking for another card to purchase. Fans are the main limitation in determining what missions are available, so I wanted something that would increase my fanbase. The Fan booster cards are alright, but kind of expensive if you want to get a large number.

So instead I found this bad boy to add to my entourage! 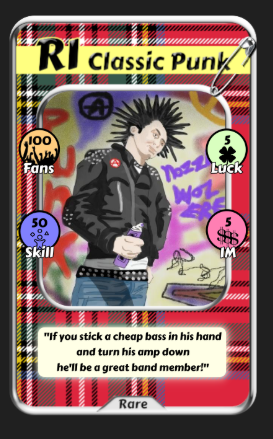 I was especially happy to get this one as its a limited release, only 250 exist. Whereas for most other cards, the mint limit is 9,999,999 (which is a pretty insane number)! Only a few of the cards are limited in this way, so this seemed like a good investment purchase in addition to providing a much needed bonus for my musical career!

Now I had a solid fanbase of 166 Fans! I continued onwards, pushing up to the higher level missions when I could, though that was always on the reliance of the ever-fickle Drunk Fanbase! One lucky day, after scoring a large number of Drunk Fans I was finally able to run the Saturday Headline event, which is the biggest event you can take on in the starting zone! It is also important as it funcitons as a gateway to the next zone, which you cant enter until you've run at least Saturday Headline show, AND own a Mid Range Acoustic Guitar. Luckily I had the Starbits for it, and that was my next purchase. 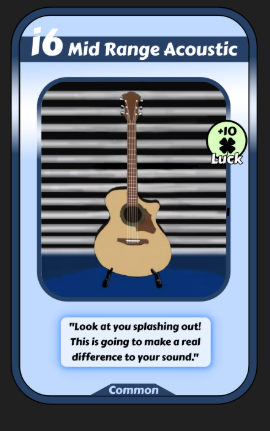 This was my first chance to see to peek beyond the veil and see the new set of missions! I was a bit surprised to see them mimic the initial set of missions almost exactly. But after some reflection it made more sense. Once you reach the pinnacle of a Saturday night headliner in your home town, you want to have access to useful missions that don't use all of your Energy in one go.

Unfortunately, a glimpse was all I got. I managed three Radio Interviews on the Local Gig Circuit before my Drunk Fans forgot about my music and faded into the night. I was back to running Midweek gigs for the most part.

I did also invest into a Pizza Box, as it allows you to save Pizza Slices (which refill Energy), for later usage. Definitely a recommended purchase! You will quickly get your money's worth out of it.

Next up, I'll continue with the mid to high range missions in the Home Town. Accumulating more Starbits for my next addition. The Metal Drummer! 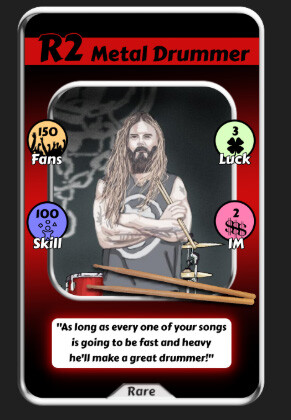 So it'll be myself on acoustic guitar, a classic punk bassist, a metal-influenced drummer, and a female rapper for lead vocals. Sounds like a pretty sweet band! Hope to have them all together for my next update! Until then!

If you're interested in the game, you can use my referral link (though it's not required) - https://www.risingstargame.com?referrer=cryptoznewb