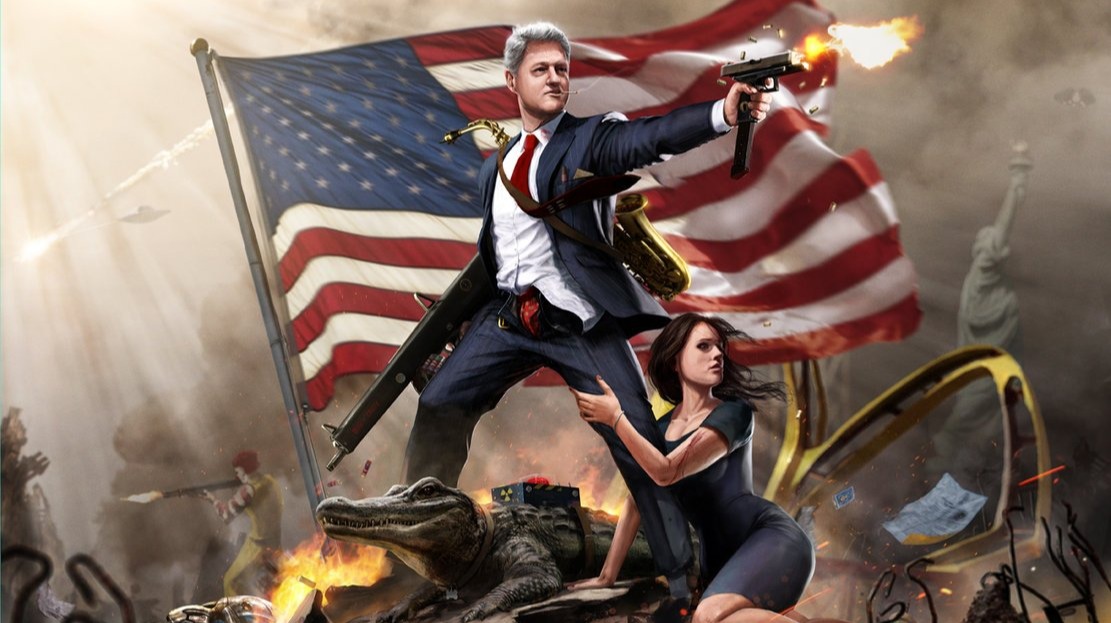 Trying to get this artist a little more attention It was probably a few years ago when I stumbled across an interesting series of paintings on the internet. It started when I saw this Clinton painting and thought it was amazing and absolutely ridiculous. After that I did a little digging and found out that there are a fair amount of these paintings all done by the same artist, Jason Heuser. Seeing as how I have absolutely no artistic talent whatsoever I am always impressed by those that have that gene. I would say that I am by no means an art connoisseur but I think anyone, novice or expert themselves, can enjoy these absurd masterpieces. I wanted to share a few of my favorites with you and this seems like the perfect venue for that. If nothing else it will hopefully get this artist a little more attention and allow him to keep making these interesting creations. I'll link to his etsy and personal pages at the bottom for those interested in purchasing his work. While the Clinton picture was the first one that I saw I actually really enjoyed this one. Being into history a bit I knew that Teddy Roosevelt actually wrote about a bigfoot encounter in his 1893 novel The Wildnerness Hunter. It wasn't a firsthand experience but instead a second hand story told to Teddy by an old frontiersmen who claimed to have come across an ape-man who killed his partner. You can read more about that story here but I immediately felt it was appropriate for the original Rough Rider to be patriotically blasting a squatch. The historical tie in probably makes this my favorite of all his paintings. This one is sort of along the same historical lines as the last one. We all know Ben Franklin liked to experiment with electricity and the ol' key tied to a kite string is a story that I think everyone knows at this point. Who's to say that his knowledge of electricity wasn't gained by kiting his way to the heavens to battle Zeus using homemade lightning claws? I mean I wasn't there, were you? I checked and there was no Snopes article to debunk this theory so I'm leaving it at plausible. I also love the little details like the random $100 bills floating around him because he is Ben Franklin of course. I would say there is a little less historical context for this painting but that doesn't make it any less awesome. President Bush jumping out of a plane, riding a shark, and firing dual pistols into the air like a stereotypical crazy Texan is still something to behold. This is another one of those paintings that seems to stretch believability. I was watching the famous documentary Jurassic Park the other night and no where did they mention a raptors willingness to take a saddle or be ridden, so consider me skeptical of this one. On the other hand he did end the cold war and if you can beat the Russians then who's to say what he can or can't do.

Where to find him?

So if you have enjoyed these few paintings and want to see many many more or even purchase some to proudly adorn your man cave/car dashboard/wherever you hang fine art, you can go to-

Etsy- Here you can order most of his prints in a variety of sizes.

Deviant Art- Here you can find all of his works, its where he first started to get noticed. You want MMAbe Lincoln? George Washington killing Zombies? Obama riding a lion? He's got you covered

Or just an interview with the artist himself

I encourage you to check it all out and let me know what your favorites are and see if you enjoy it as much as I do.