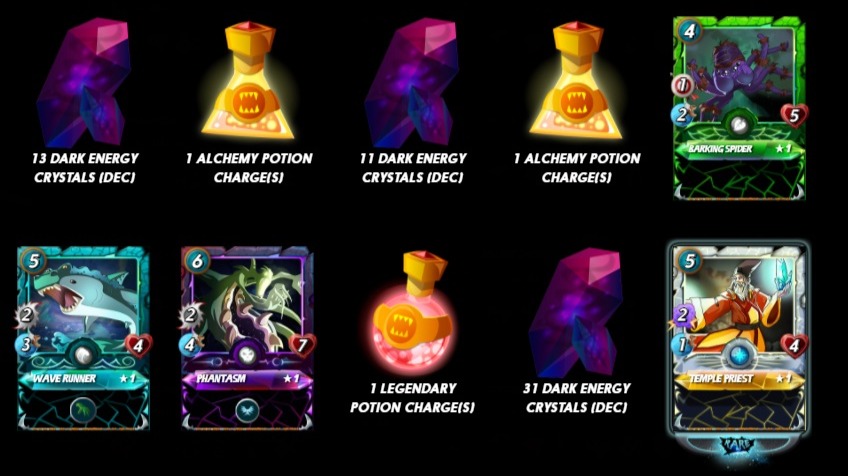 Splinterlands April Review - I was a Silver fighter not a fool!

In April, I managed to reach Silver II for the first time. It's much better to receive two reward chests at the daily quest, and was amazing to receive some epic cards in those chests.

Another benefit of reaching Silver II was the end of the season bounty. I unwrapped 5 cards from 15 chests, and the 33% percentage is more than acceptable. Also received 1000 Dark Energy Crystals, which I used to upgrade the Sand Worm and some Water monsters. 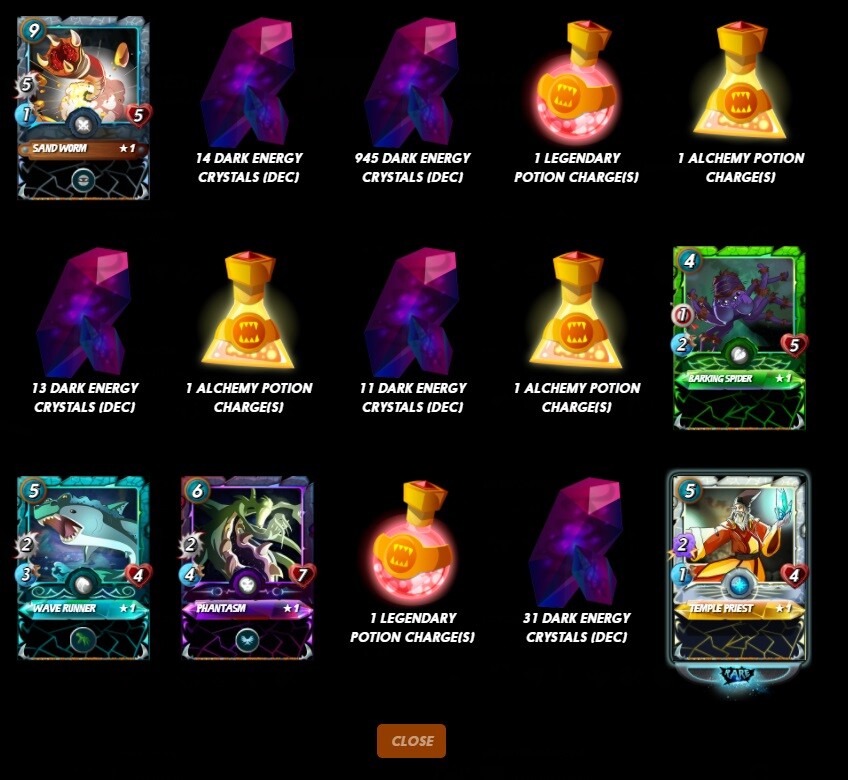 The weekly battle challenges made me go down memory lane, to the times where I was playing World of Warcraft! I made an imaginary journey beyond the Dark Portal, into the Outlands. I traveled through Zangarmarsh, I fought against nagas, dragons and I tried to catch The Betrayer... but I was not prepared!

The first challenge of April came straight from the Sporeggar Lands in World of Warcraft. The Mushroom Seer acts as a magic dampener as his Silence ability will reduce the opponent monsters magic power. This card was an old reward gift so I had to borrow it from my brother. For 5 mana, the player will take full advantage of the Silence ability and 2 Magic Damage. The Mushroom Seer will gain Poison at level 5.

I started the team with the Nectar Queen as a tank, backed up with heals from the Wood Nymph. The Mushroom Seer and the Child of the Forrest were in charge with the damage. The opponent chose the Fire Splinter with many ranged monsters. The fight looked even and was decided by random events. The Blast of the Pyromancer was reduced by the Seer and this made the difference, turning the tides in my favor. The Mushroom Seer is a great card for magical battles, and with 2 Magic Damage is also a good addition for quick nuke teams. I never used this card until this day but I am considering it for future battles. See the full battle here! 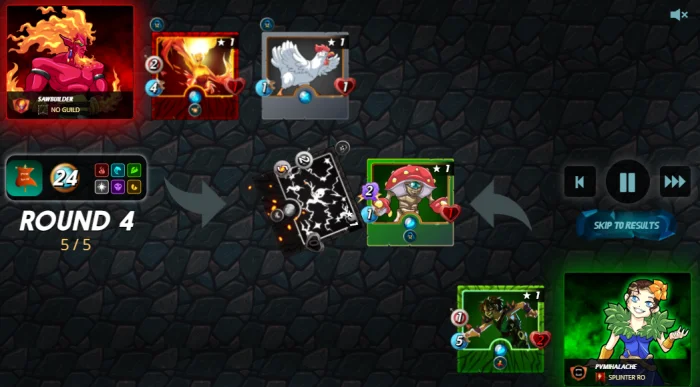 While sorting my print screens folder I found a picture of my overpowered Rogue from the good old times when I was playing World of Warcraft. My Forsaken was one of the best in the world gear-wise and I was raiding every week. The nostalgia was completed by the Splinterlands Weekly Battle challenge which involved Nagas. 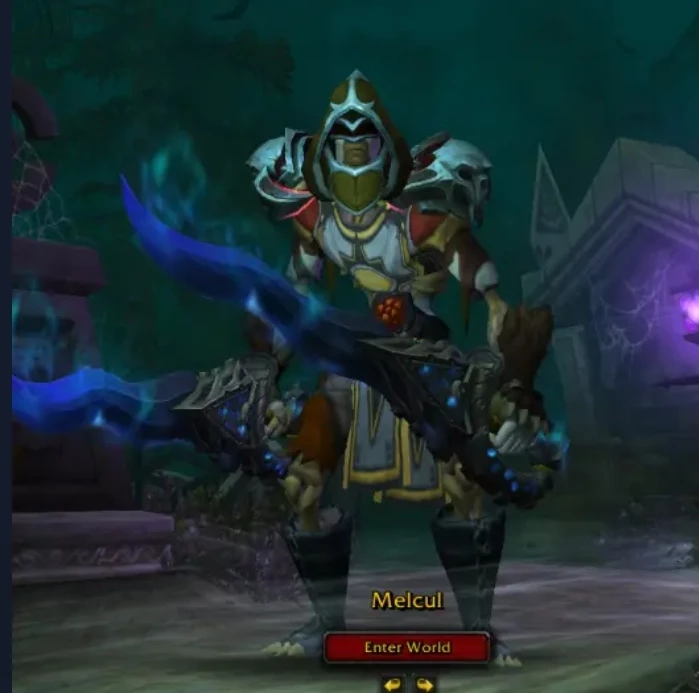 Hellfire Peninsula was full  of adventure and I survived the Fel Reaver because the huge metal monster can be spotted from miles away but here monsters are lurking in the shadows. The waters around the Coilfang Reservoir are infested with hybrid creatures, half snakes - half humans. The Mushroom people said to avoid the cursed high elves, the loyal servants of Queen Azshara . They told me to avoid the Naga Warrior, the most skilled fighter in the marsh. 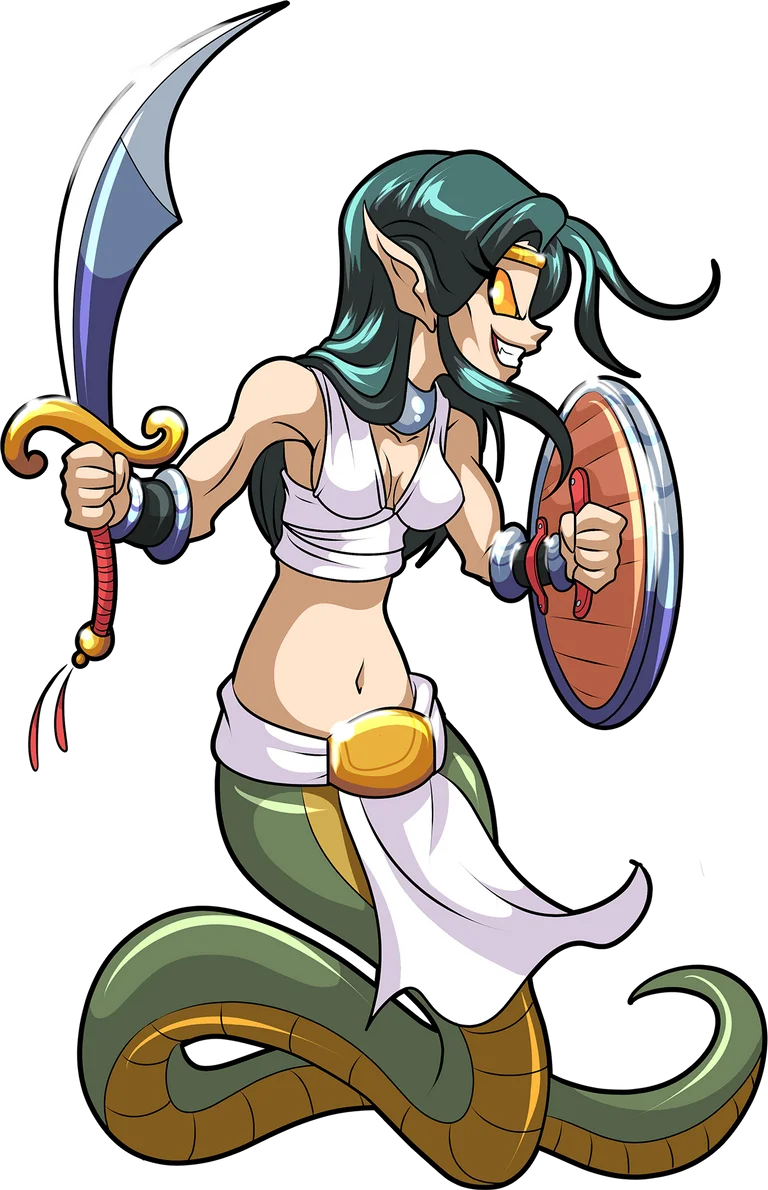 The waters around the Coilfang Reservoir are infested with hybrid creatures, half snakes - half humans. The Mushroom people said to avoid the cursed high elves, the loyal servants of Queen Azshara . They told me to avoid the Naga Warrior, the most skilled fighter in the marsh.

Furious Chicken - Just because it's free

The opponent team was chosen from the Fire Splinter, with the Lava Elemental as main tank and the Ettin Spearman as main damaging monster. The Lava Elemental was defeated in round two, and my Naga Warrior followed shortly. Was just a matter of grinding for the Water Elemental and Wave Runner to take the Ettin down and win the battle. The tactic for the game was successful, as the Naga Warrior survived enough to shield the Water Elemental to nuke the opponent monsters. The Wave Runner could hit from behind the Naga and deal damage. I will use the Naga Warrior more often, as the 3 damage from the retaliate can be a game changer. See full battle here! The last two challenges , the Mushroom Seer and the Naga Warrior, made me feel nostalgic and I was surprised to see another Naga challenge. Melcul story continued ...

"The Outlands expedition was destined to fail. The Betrayer is not hiding in here, he is gathering an army. I wondered for weeks in Hellfire Peninsula, before reaching the lush lands of Zangarmarsh.

The waters around the Coilfang Reservoir are infested and ruled with nagas. The hybrid creatures, half snakes - half humans, were high elves many centuries ago but they got cursed by Queen Azshara's actions. After the Naga threat was removed from Zangarmarsh, my journey continued to new lands, in the search for the Black Temple. 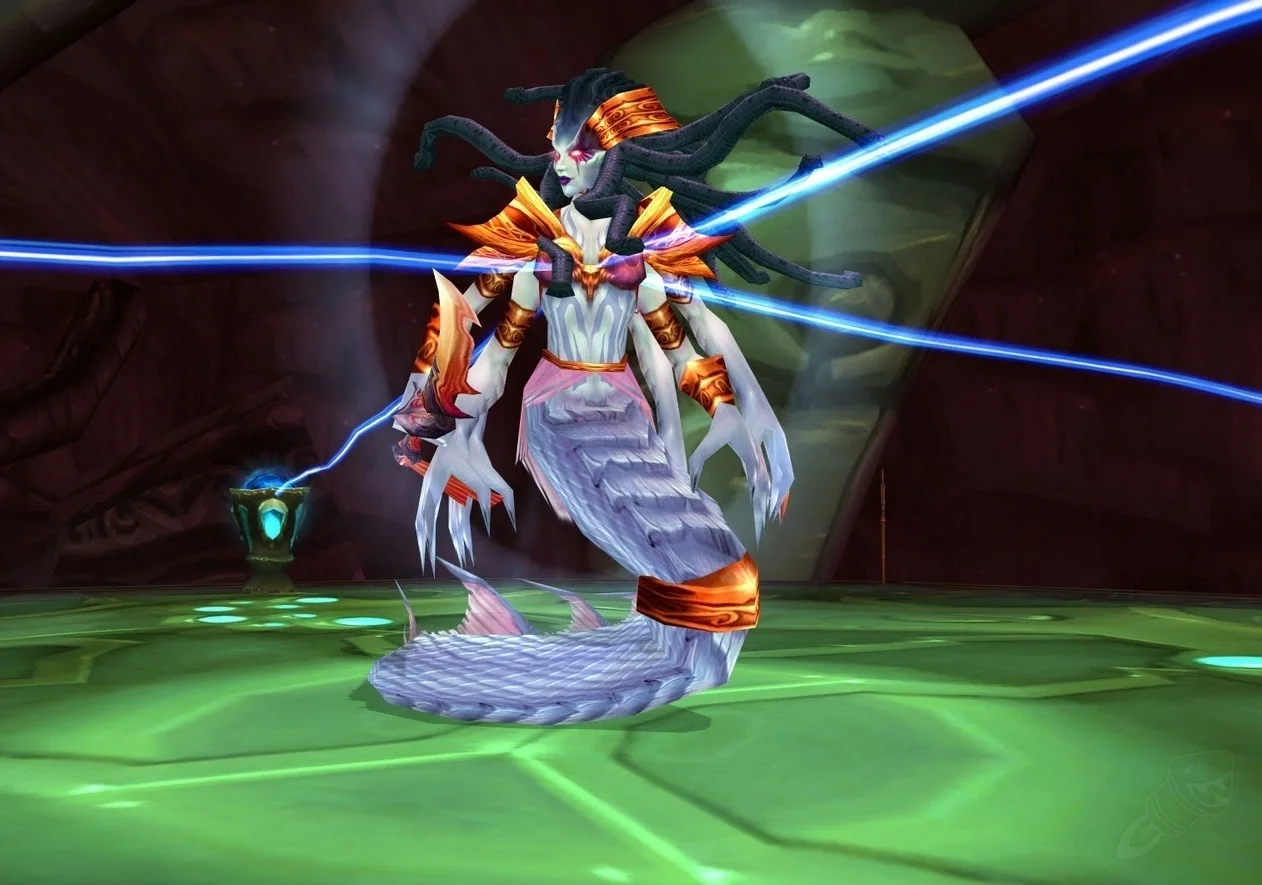 I helped the Sporeggars to clear the Coilfang Reservoir and the Serpentshrine Cavern, banishing Lady Vashj from the Outlands. The remaining nagas were impressed by my power and joined my army. One of them was a powerful Naga Fire Wizard.

Exploring a new continent is difficult and an unexpected turn of events took me to the Blade's Edge Mountains, a place invaded by gigantic Dragon-Slayers. I had to purge it by fire! Fire Power geared up and ready to scorch! As the journey in the Outlands continued, so the use of nagas. After the Naga Warrior, is the turn of the Fire Wizard to show the superior combat skills. I have two issues with this card, the high mana cost and the high market cost. The card is hard to find, and the cost is above the median.  The Naga Fire Wizard feels quite expensive for 8 Mana. Also is a card that I couldn't fine on the market and I had to borrow it from my brother (yes! again!). It has 2 Magic Attack and 2 Speed which is not great compared to the cost. Is a good defensive and long game card, with 6 Health Points, 1 Armor and the Shield Ability. The Naga Fire Wizard will gain Thorns at level 5 and can be used as a pure caster or as a second tank. Has versatility and can be integrated in different dynamics.

The Gods of Random made this battle very competitive thanks to the Silenced Summoners. The Explosive Weaponry boosted all monsters with the Blast ability, each of them doing extra damage to the monsters adjacent to the target. I was able to select the best team thanks to the 40 mana allowance.

And Miner- Using Scavenger to gain extra HP and reduce the Blast effect. The Blast from attacks was sharing extra damage but my monsters had more HP and absorbed the splash damage better. The opponent was brought down to only 3 monsters before round one was over. It was a game of "who nukes first" and the Blast boost made the fight quicker than ever. The difference was made by the high speed of Fineas Rage and the Sneak attack on the back line. The Naga Fire Wizard did an excellent amount of damage and contributed to a well deserved victory. See the full battle here!

The strategy worked out because the opponent monsters had low health and high damage. The team was made up for a quick fight but ignoring the health aspect made the monsters weak against residual damage from the Blast ability. The Ant Miner was able to tank up health while Fineas Rage was able to hit from the second position, before the opponent turn. The cards power was amplified by the battle mechanics. This week we are moving from the Outlands, nagas and World of Warcraft to dragons, mighty fire spitting dragons! It' all about the Fire Spitter, the dragon ... not about Spitfire, the fighting airplane! The Fire Spitter is an epic card what can be obtained as a reward. This Dragon type card costs 4 Mana and 6 Health Points, with 4 Speed and 2 Ranged Attack. The basic ability is Flying and will gain Dodge at level 6.

I wasn't fortunate enough to receive this card as a reward so I had to do the usual "borrow 24 hours" from my brother @H3ruvim78 . I am fortunate to have someone who plays for a longer time, has better cards and more experience! Once I had the Fire Spitter in my deck, I headed to the Arena, to scorch some opponents.

The Gods of Random chose a 20 Mana Limit fight with Explosive Weaponry Ruleset. As all the monsters will have the Blast ability, will be a matter off who has a faster set up and will hit first. I chose the Drake of Arnak as summoner for 1 extra Armor Point, an easy choice as this one is my only dragon summoner. My choice of splinter was Water as the strategy I created around the Fire Spitter involved a strong tank and fast Ranged Damage. Team set up and game strategy: Serpent of Eld: Main tank with Dodge. The Fire Spitter will do fast ranged damage. Furious Chicken: Used in second position as a barrier between the Serpent and the ranged monsters. The Water Elemental was left in the last position as he has Healing and will absorb more damage.

The Chicken was the first one to fall, at the end of Round 1. However, the enemies are already heavy damaged from Blast.  Fineas Rage and the Living Lava where taken down by the same hit from the Serpent of Eld, and from here was an easy ride. The Round 3 was the final blow. My strategy was advantaged by the Explosive Weaponry ruleset as my monsters where quicker and dealt more damage before the opponent turn. See the full battle here Reaching Silver II is my biggest achievement so far in Splinterlands. I am not the noob that started playing back in December but I am not yet a top player. Splinterlands ... I was not prepared! 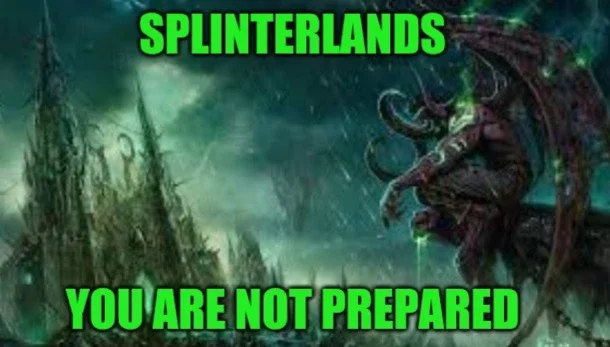