A strange meteorological phenomenon happened in Ampleforth Village last night! The citizens were alarmed by metallic noises on the roofs, and when they checked out the window, was raining money! Strange ones by the size of the £2 coin but inscribed with $FORTH were pouring over the village. The legendary hero Ampy Forth started an investigation and he quickly concluded that the airdrop was a gift for the Ampleforth Village, as loyal supporters and holders of AMPL. He just thought about all the banter and bullying received by AMPL holders from others, and now he feels happy for them. Haters gonna hate now and will just say that some "got lucky" for using, holding or spending Ampleforth! 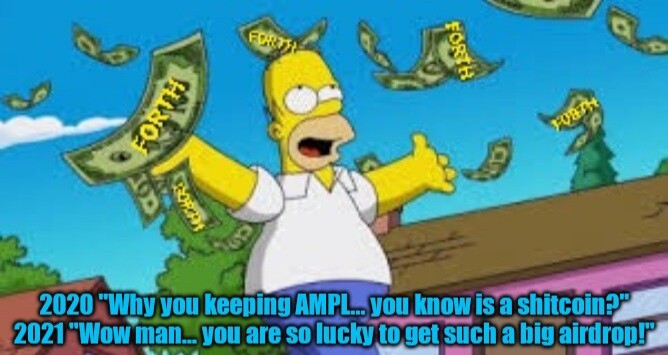 Stretching beyond the story!

Can money fall from the sky? Yes... that's why it's called airdrop! It was quite late in the evening when I seen the below tweet, announcing that the Ampleforth $FORTH governance token is now live. The $FORTH token can be claimed by those who interacted with $AMPL on-chain.

The claim can be done on the claim link on the AMPL website no later than 16th of April 2022. The unclaimed $FORTH will be placed into a community governed DAO.

If AMPL is the elastic and independent currency, $FORTH is the governance token that runs the ecosystem. This mechanism is community controlled, allowing the holders to vote on changes to the core AMPL protocol and the evolution of the ecosystem 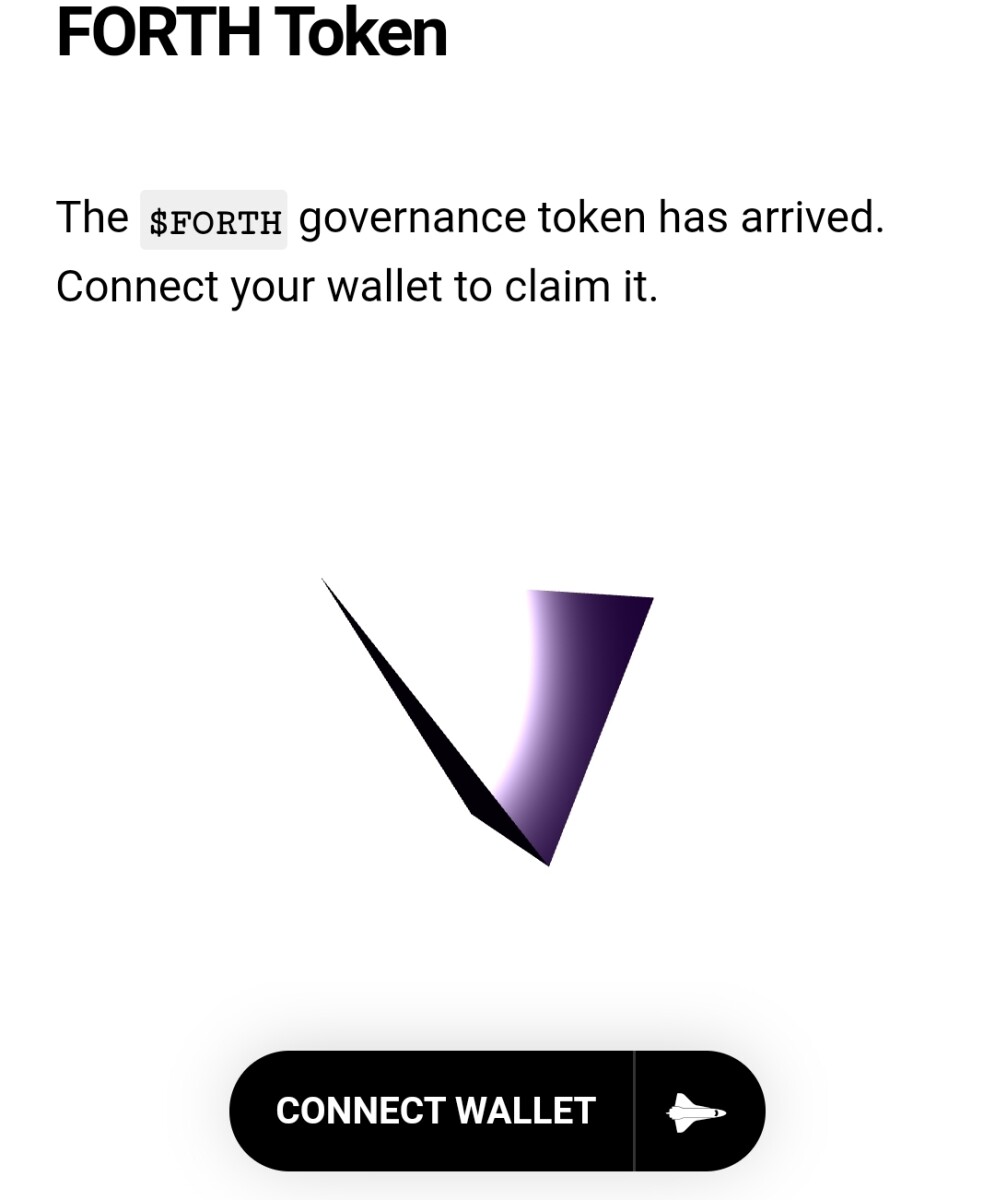 Users can connect to the claiming dashboard with Metamask,  Ledger, Wallet Connect, Coinbase Wallet, IMTOKEN, Status, Trust Wallet and Authereum. A transaction fee will be required during the claiming process. 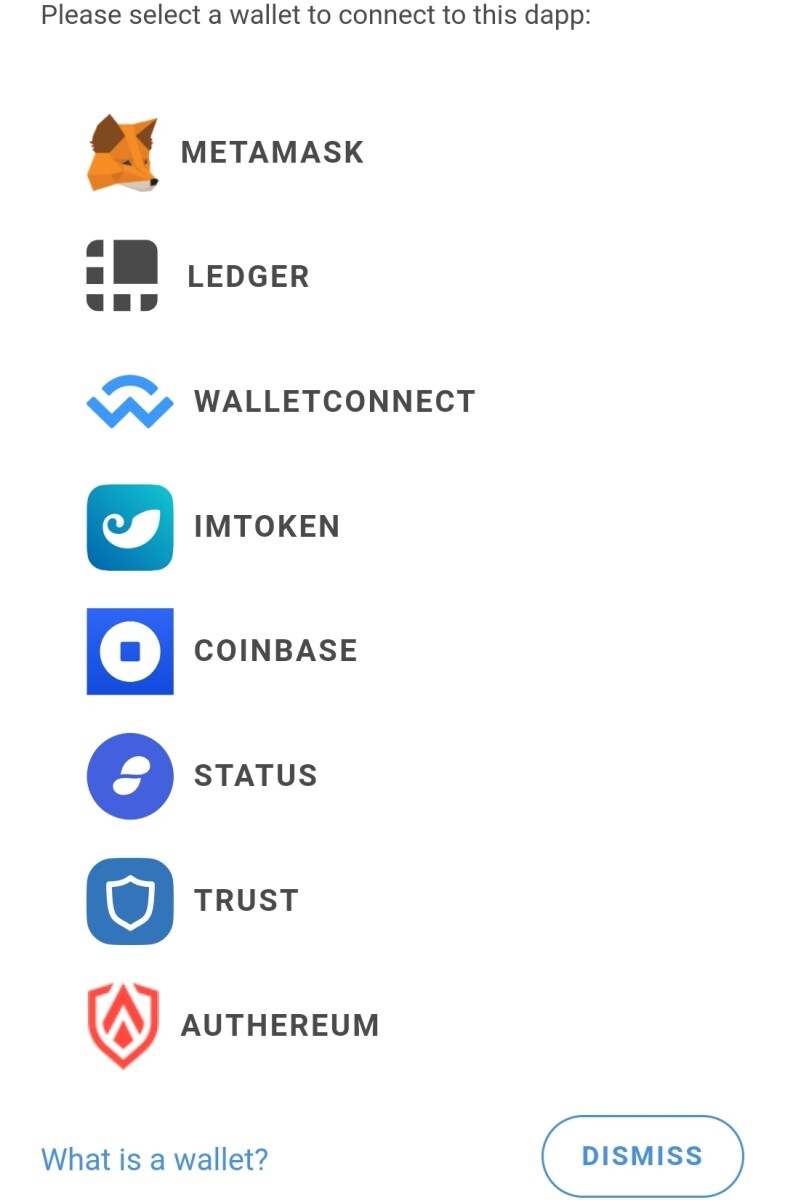 The $FORTH token comes to complete the Ampleforth ecosystem and to create synergy between the protocol and the community. The token launch is the next step towards a fully decentralized organization. 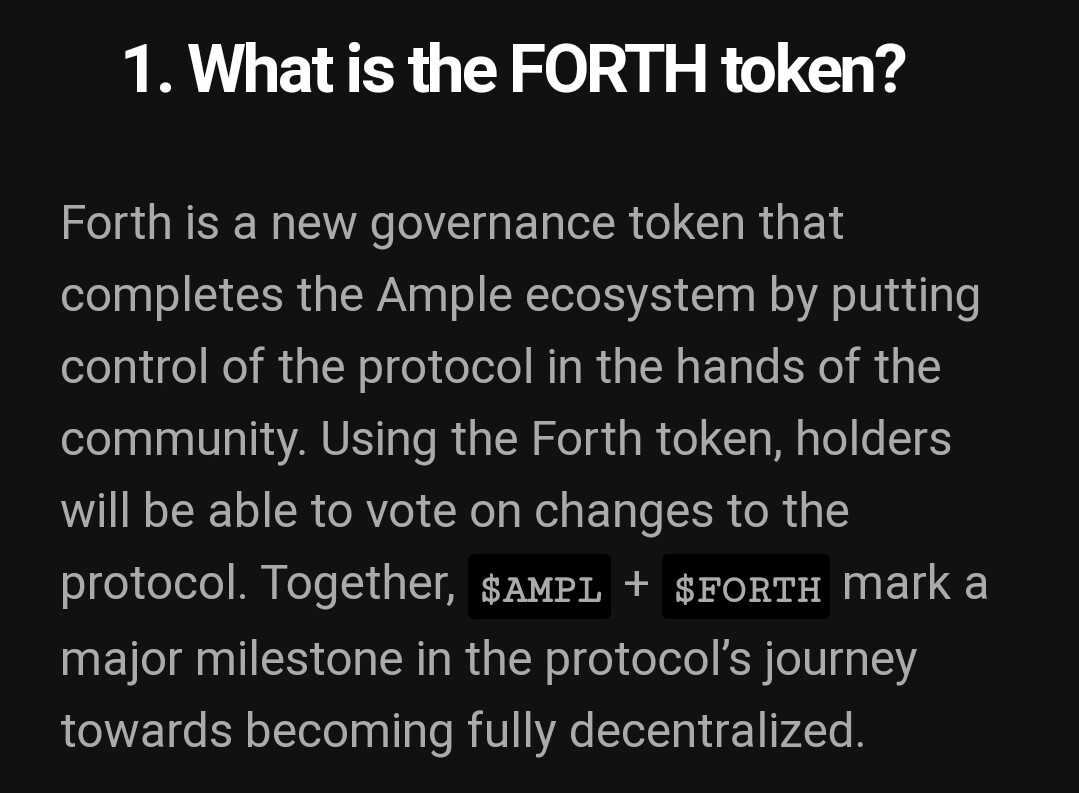 Am I eligible to claim it? Yes ... I am! The snapshot was taken on the 30th of March and according to the shared information, over 80,000 users interacted with the AMPL token. 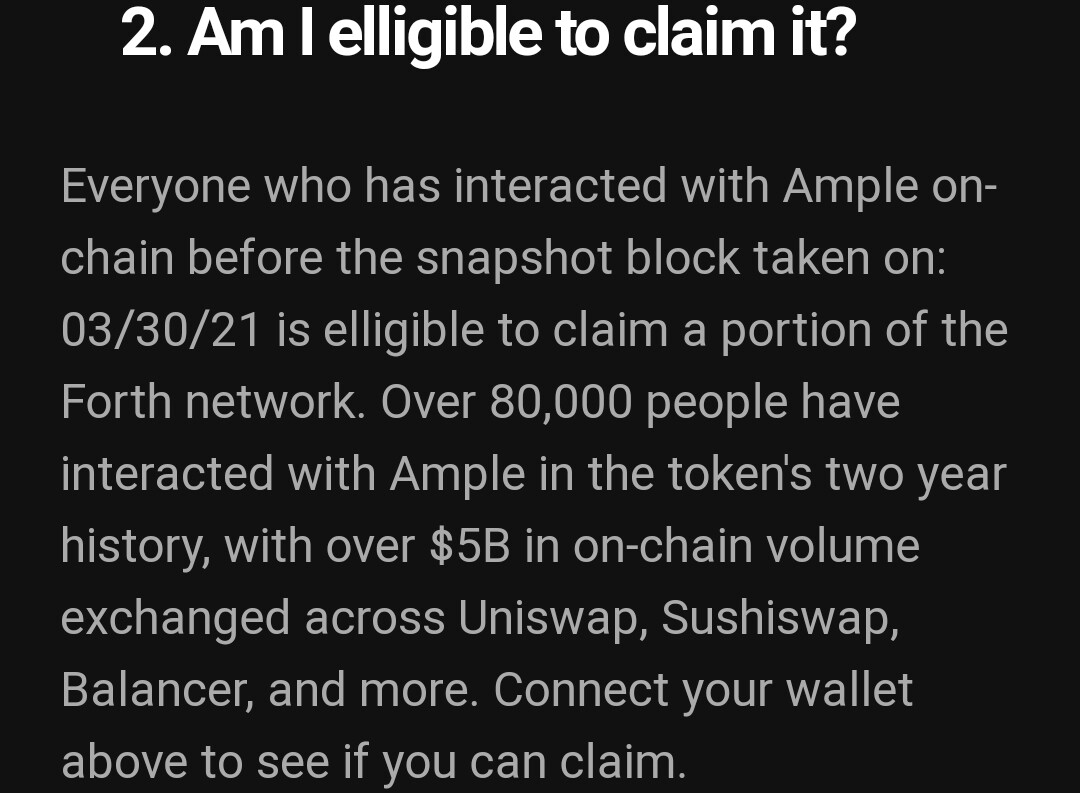 How can I help? I can be part of the AMPL evolution and by sharing the information. If the community is bigger, the bigger will be the DAO power. Check the Claim Page and see if you are eligible! 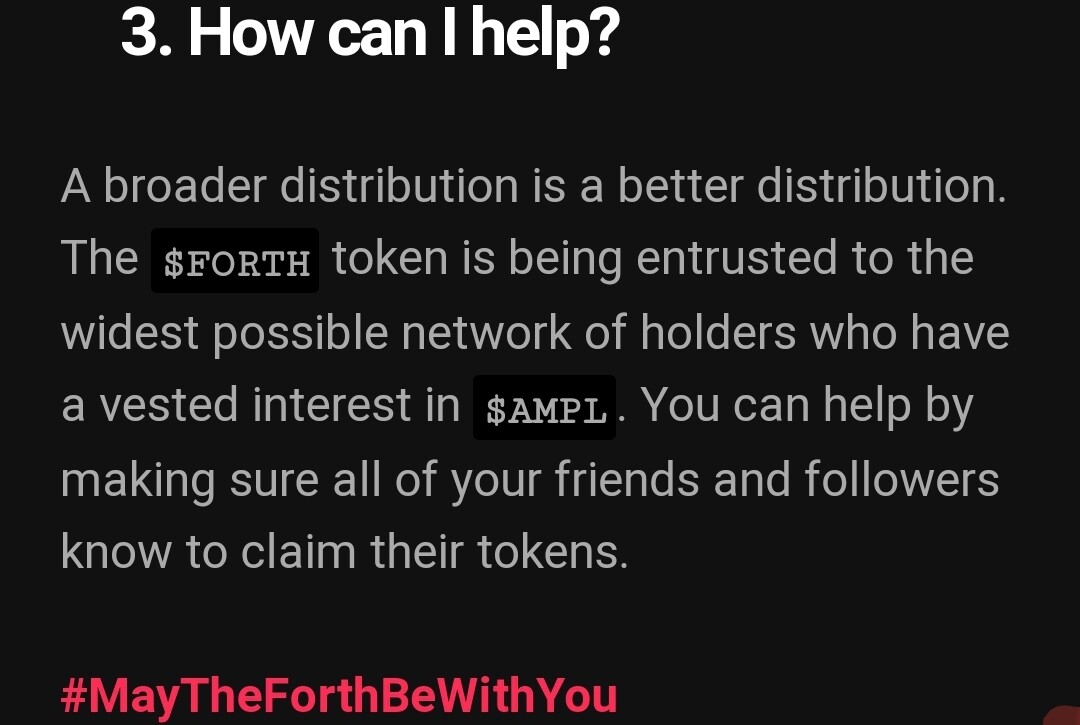 May the $FORTH be with me!

It took nearly 4 hours between the moment I seen the announcement and my claim, as the page was struggling to maintain online. It was understandable as probably the 80,000 individuals were trying to claim their reward. I was rushing as I wanted to get a good value for money

I followed the steps above, and I strongly recommend you to do the same if you ever withdrew AMPL from Publish0x, and pressed the "Claim" button. I was confident I had enough interaction on-chain, as I earned 376.89 AMPL since it was introduced in the tipping system, and happily paid $30 as a transaction fee! IT WAS THE BEST $30 I SPENT ON A TRANSACTION! Took about 1 minute for my claim to set and those 60 seconds felt like centuries! 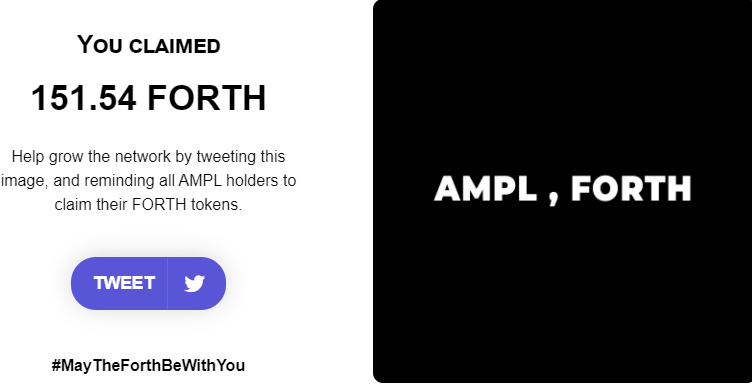 The value of the $FORTH token when I've completed my claim was $55.84, which was enough to made me WOW! Claiming 151.53 $FORTH was like Christmas in April. I join the "Who cares about the Uniswap airdrop!" gang and I am ready to put my AMPL shirt and play for their team in the next 5 years. I had to manually add FORTH as a custom token by adding the token contract address on my Metamaks wallet. The airdrop value was $8,626 when I claim it. 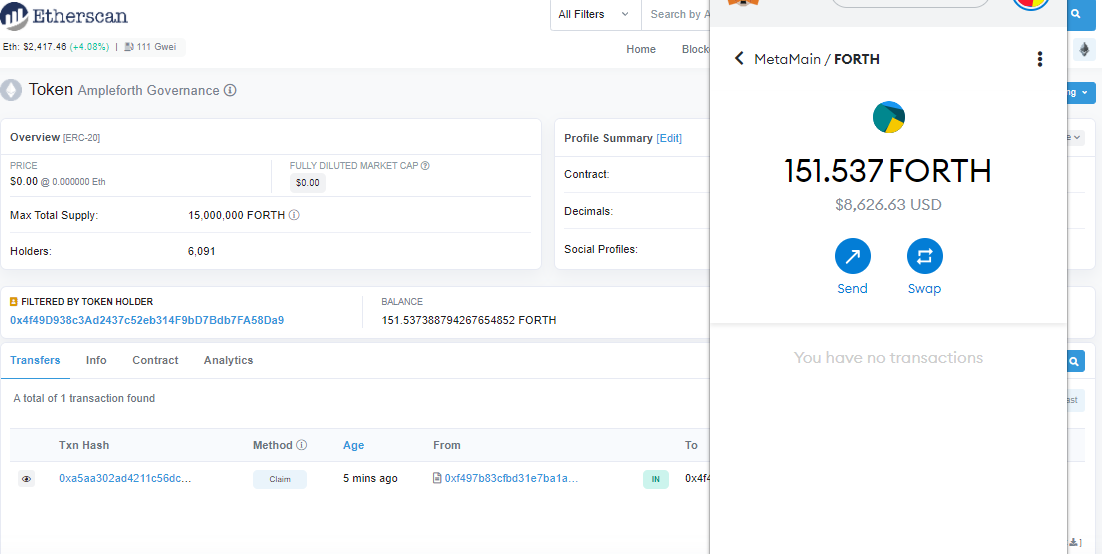 As it was added on Coinbase I decided to transfer it in there for more options on how to use them. I paid $30 for a fast transaction, only $1 more than the average one. Took about 10 minutes for the FORTH to reach the Coinbase wallet, which combined with 3 AM in the morning, made me panic and triple check again to make sure I didn't to a mistake and lost it all. I have to thanks the P0x team for making this possible and open the AMPL opportunity for me and my #P0xBros. 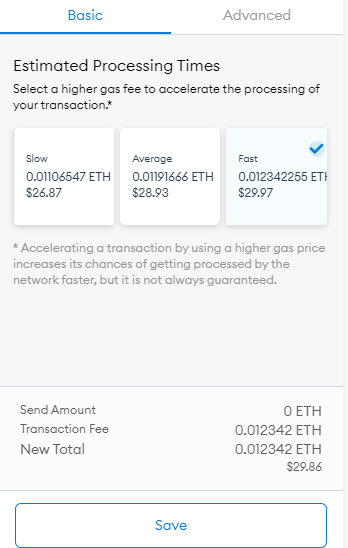 The Legend of Forth Family

Ampy Forth's story started "long time ago" in the P0x metaverse. It was a harsh winter when AMPL was integrated in the Publish0x tipping system, and Ampy Forth was only a child. Ampy Forth was the son of Aaron Forth and Anna Forth, born in Ampleforth village, in the Ryedale district of North Yorkshire, United Kingdom. His dad was the village constable, flexing his muscles against the bad guys, solving crimes and mysteries, and above all ... keeping the community safe from any kind of antisocial behavior. His mum was the pillar of the society. She was the head-teacher of the local school, founding member of the "Ampleforth Neighborhood Watch" and a Yoga instructor. I heard that she was ... really flexible! When he grew up, he travelled the world, but his heart remained in Ampleforth Village. He returned home and was appointed Head-Teacher and "Líder Máximo" at Ampleforth College - a school of peculiar children. At the school, he worked hard to educate the young generations about Ampleforth as an algorithmic and uncollateralized cryptocurrency and financial building-block. Now, our hero completed the task at Ampleforth College, and decided to retire. At his last speech as a Master was in front of the class of 2021, where he wished everyone many happy rebases.

Young padawans, never forget the true power of the rebase ... never forget about the AMPL elasticity, about the non-dilutive attributes and about the bankless set-up. MAY THE FORTH BE WITH YOU! 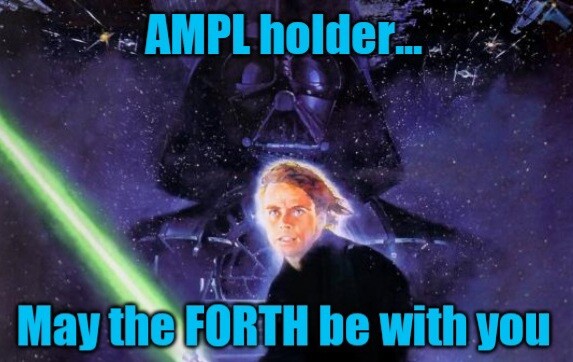 AMPLification weekend: An analysis of tips, income and interaction

The Ampleforth Academy of Excellence: Ampy's School of Peculiar Children