Infinity Skies is state-of-the-art blockchain gaming and one of the most expected games of 2022. The new concept of Play2Earn game based on blockchain technology will allow the players to build, trade, adventure and socialize in a fantasy Crypto Sandbox Game. The Demo Version is now live and I am thrilled to dive into the Metaverse. I was waiting the opportunity to try the game for months and finally I can start building my kingdom. 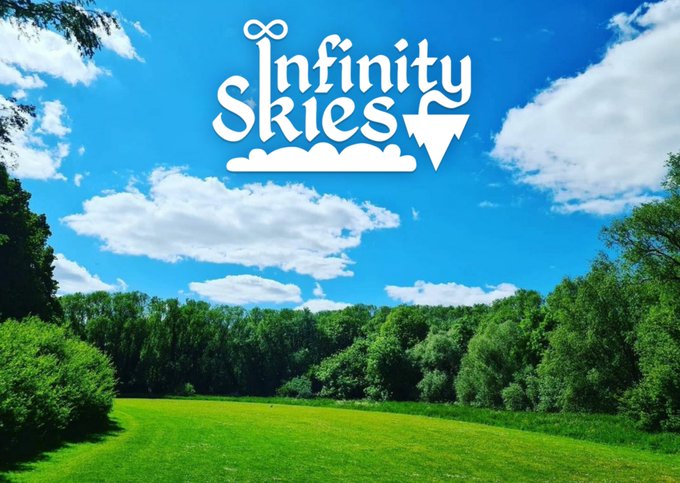 Everyone is invited to "Build, Socialize, Trade and Adventure" while working towards the creation of the most prestigious castle in the sky. The Demo version can be downloaded from: https://game.infinityskies.io/connect 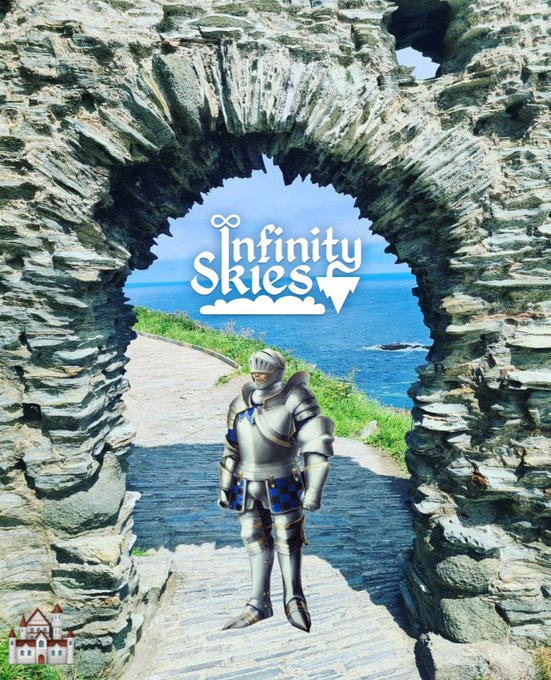 Testing the game can be rewarding, $ISKY prizes can be won in the Weekly Castle Building Competition. Build Your Sky Castle and post a photo or a video in the Discord Competition Channel. The entries with the most votes will win a share of 20,000 $ISKY. The first prize will receive 2500 $ISKY, second and third place 1500 $ISKY, with fair prizes up to the 40th place. Join now! 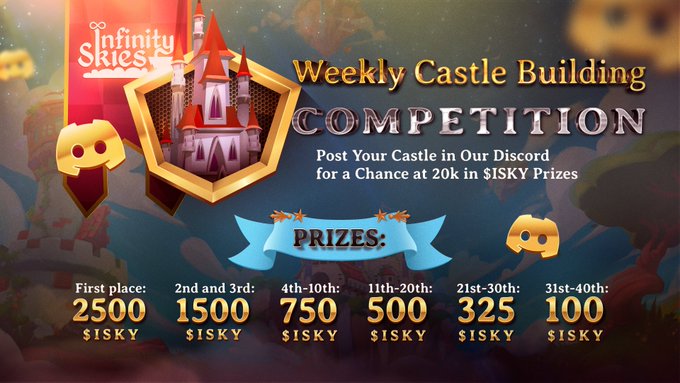 The game is powered by the Skyblocks token, minted on Polygon and holding the $ISKY ticker. Skyblocks has a burn feature set at 5% per transactions, amount re-distributed in the Play2Earn stash, the Claim Pool and to the Development Team.  The Play2Earn mechanics will include weekly rewards from the Play2Earn stash, with the 3% collected from transactions is distributed to active players. The token launch took place last week, with listing on Quickswap and Gate.io 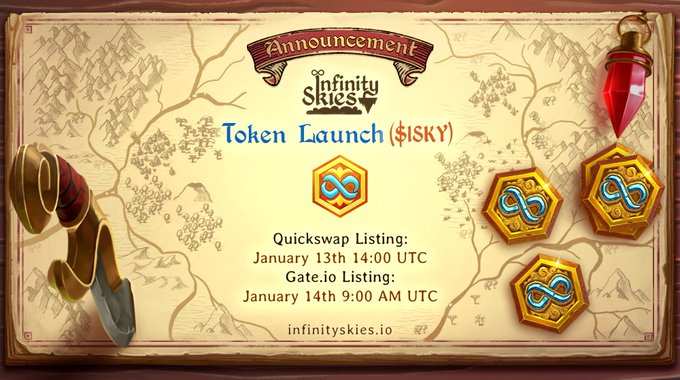 Couldn't miss the token launch and I was ready on the 13th of January, adding a nice share of $ISKY in my portfolio. I will use the tokens to get fancy NFTs to decorate my castle, and gain a little head-start before the game will become mainstream. 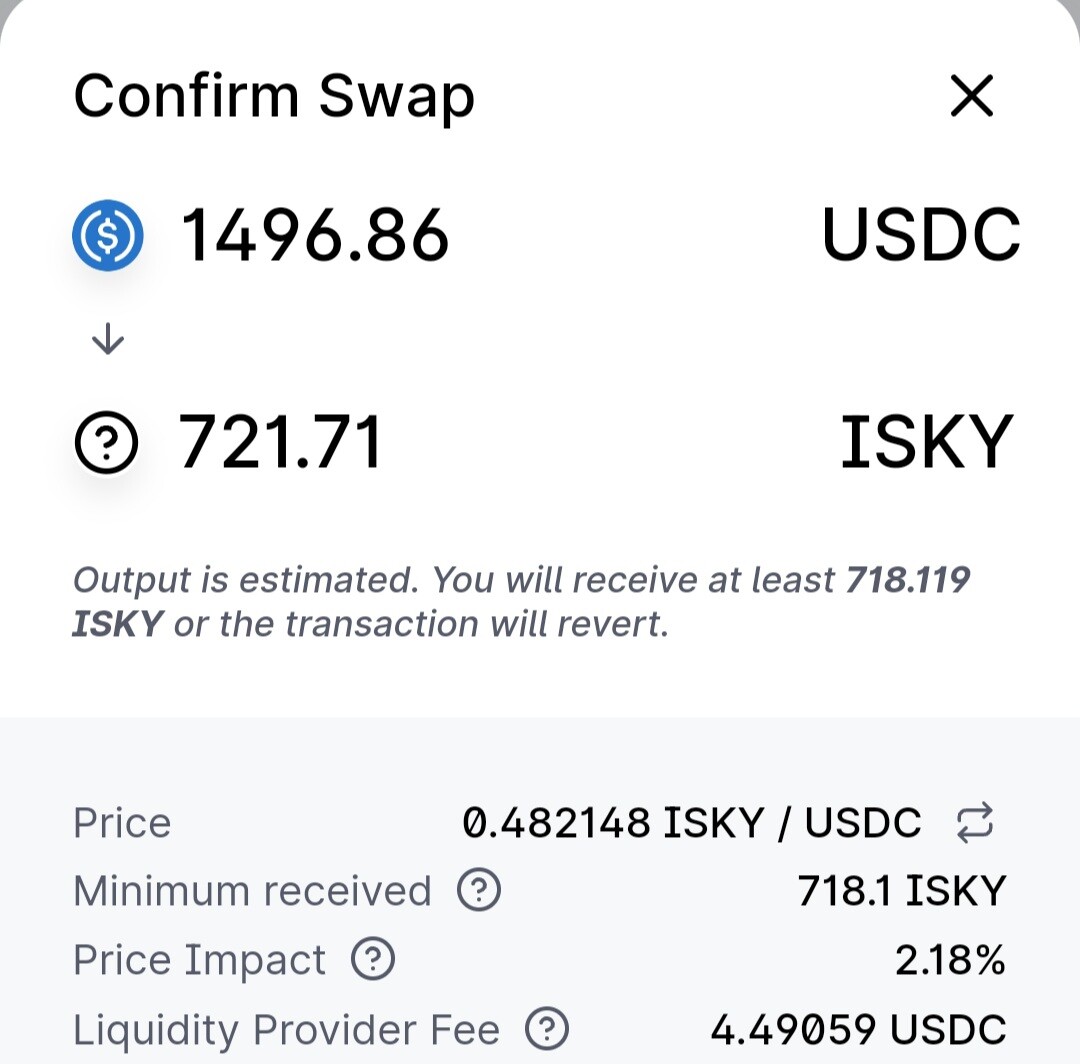 The Infinity Skies token ($ISKY)  was audited by Halborn, an elite cybersecurity company for blockchain organizations. Potential vulnerabilities were checked by the Halborn´s team of cybersecurity experts and  the audit has been completed after a combination of manual code check and automated security testing were performed.

How to play  Infinty Skies!

Download the DEMO and create your account. Log in and be ready to take charge of your sky-plot and decorate it in multiple ways. The sky plots will come in different variations, from 2x2 to 5x5! Structures, such walls, flora, decorations, furniture, etc, can be placed on the smaller grid that covers the island, having different sizes.

Select your character, either male and female, and start building! Be the best King or Queen and compete with friends of strangers for a higher place in the leaderboard. 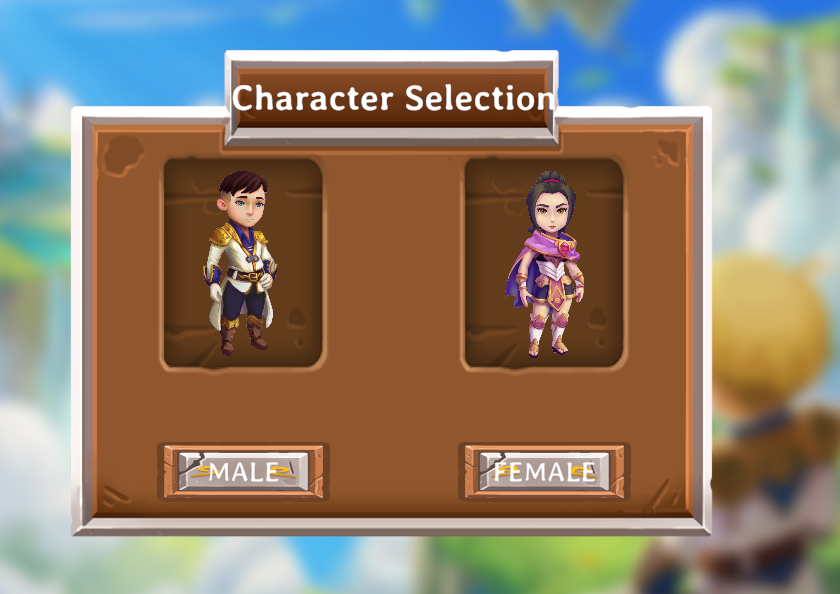 Each island will have a portal, that will give access the online castle lobby. The character can be moved around the island by clicking the desired destination and it is impossible to fell off the edge. I wanted to make sure the king will not skydive accidentally and tested the scenario. 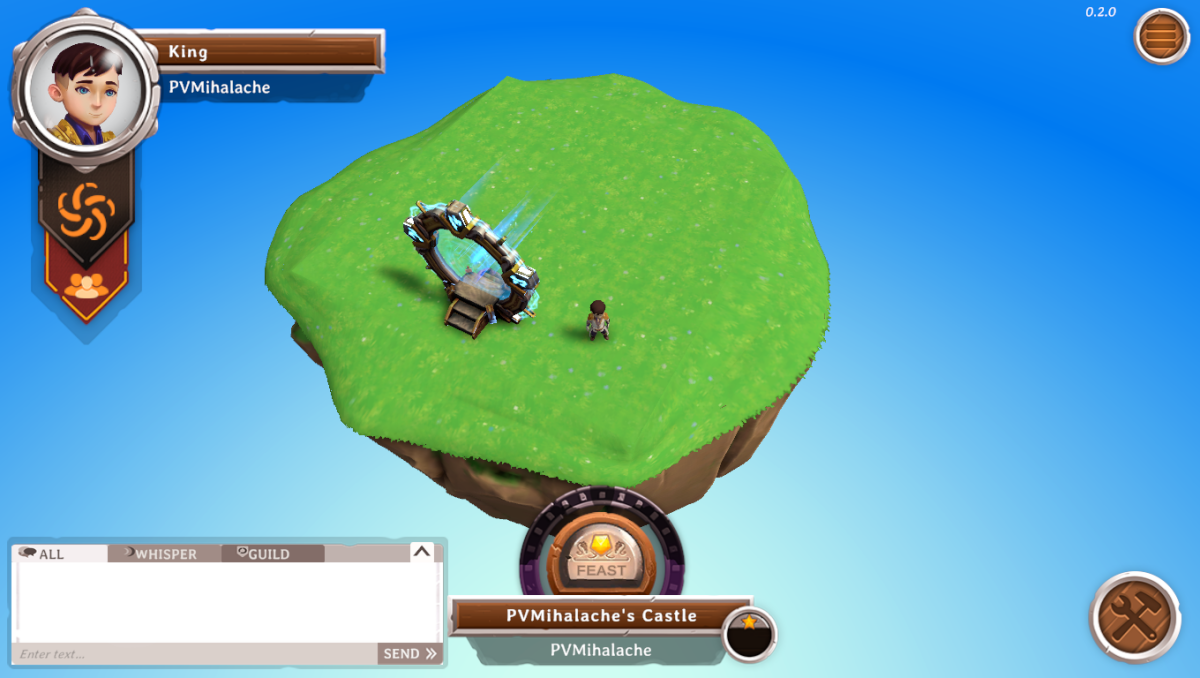 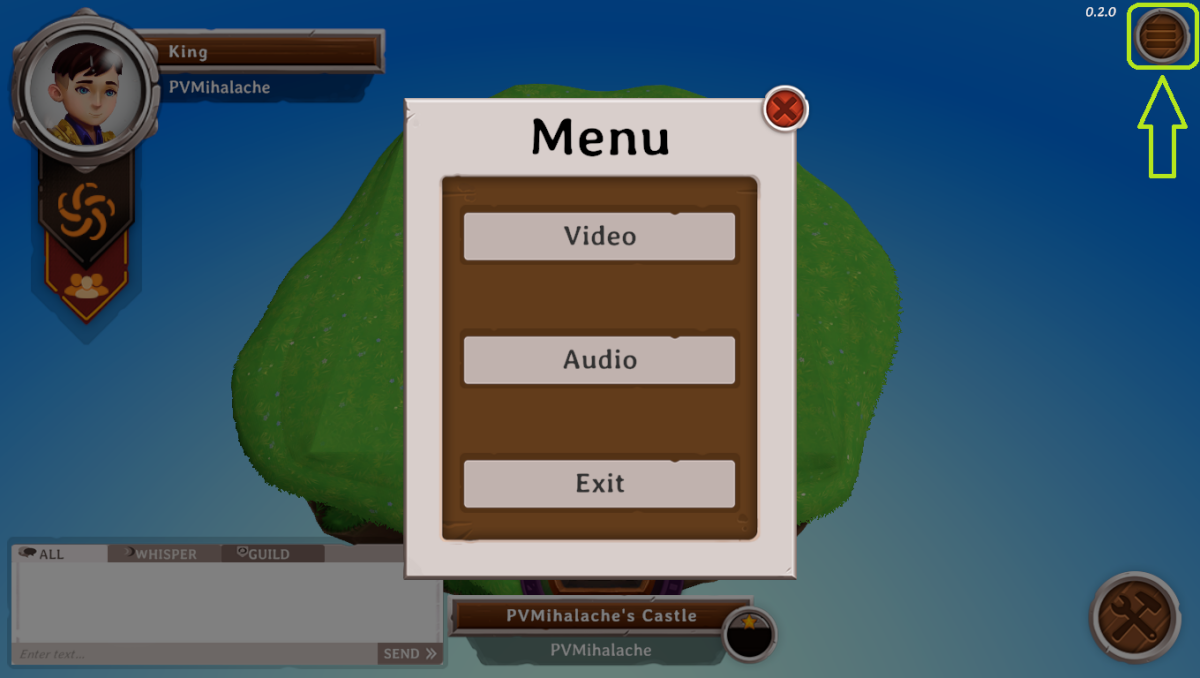 The chat works perfectly and will enhance the social aspect of the game. But on that day King PVM wasn't in a social mode, he was ready to build a Banquet Hall. The BUILD menu is located in the bottom-right side. 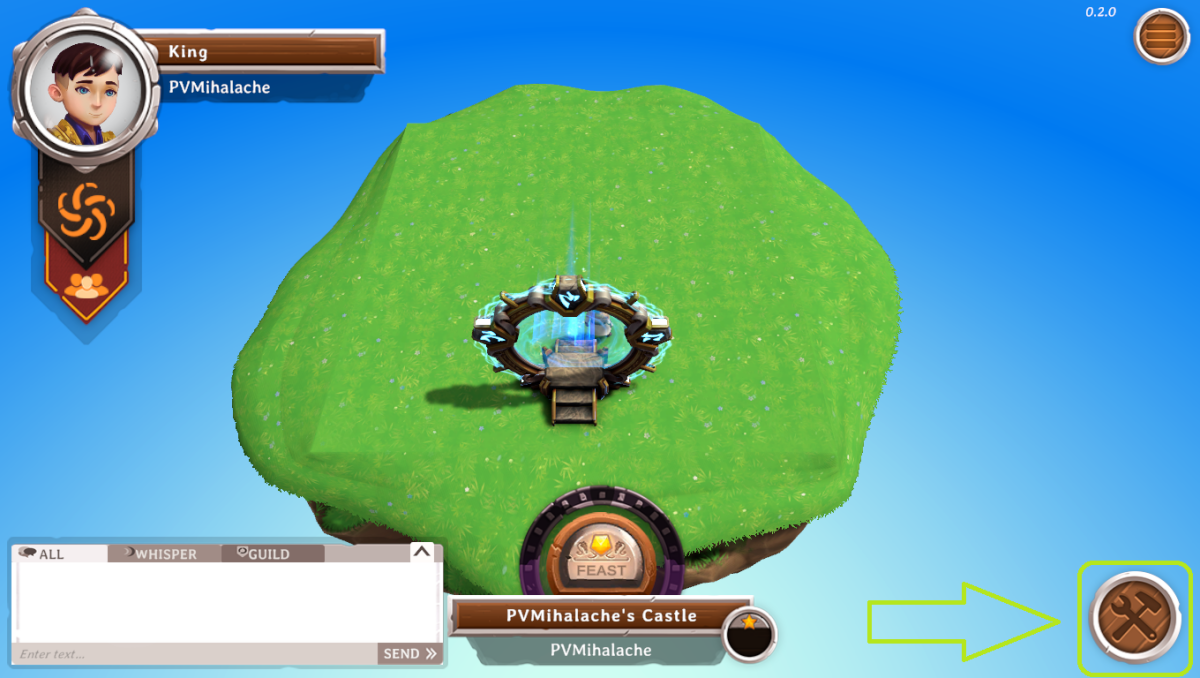 The categories of assets for sky-plots are islands, structures, decorations, paint-jobs and cosmetics. The NFTs are owned by the adventures and can be traded in the Skies Marketplace. The assets can also be burned through crafting, to receive a higher rarity NFT.

The DEMO building menu contains islands, walls, pavement and a wide range of decorations. The objects can be placed with the left click, canceled with the right click and can be rotated while holding the R button. 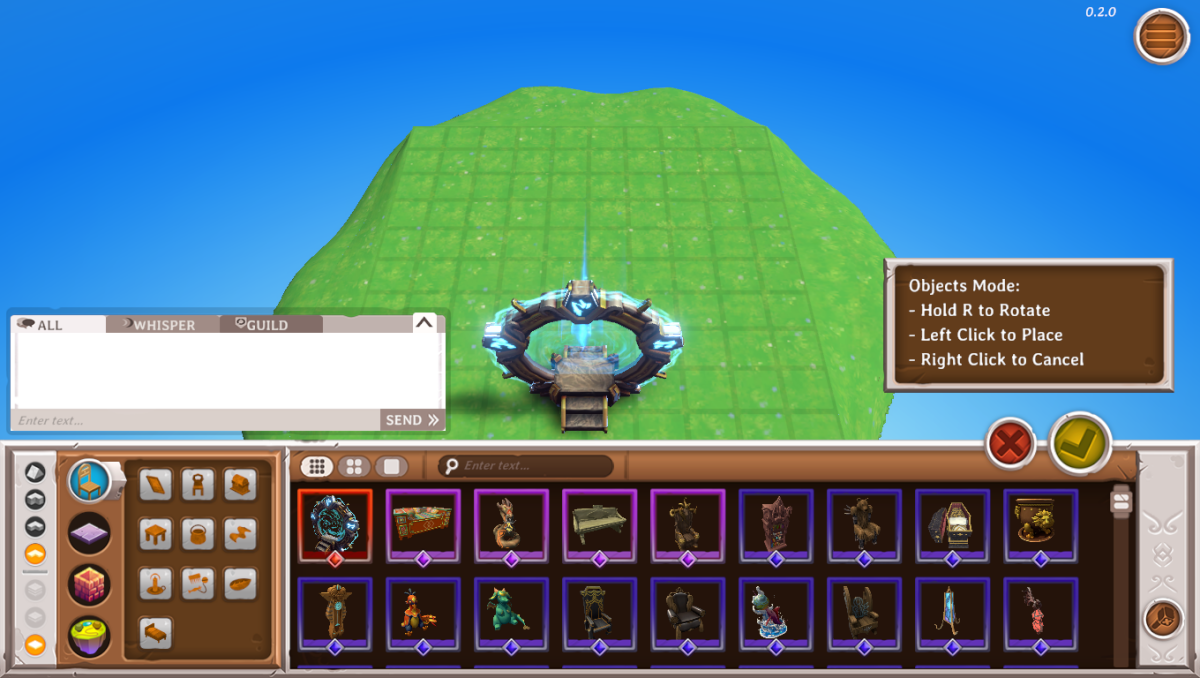 I wanted my first try to be squeezed in the standard island, as a basic try for the building options. I created a humble banquet hall, where I will invite my CRE8R bros for roast hog and pale ale! The portal was left in a central position so you can join the party immediately. Made a small room so those who will feel tipsy can have a quick nap, and then re-join the party. 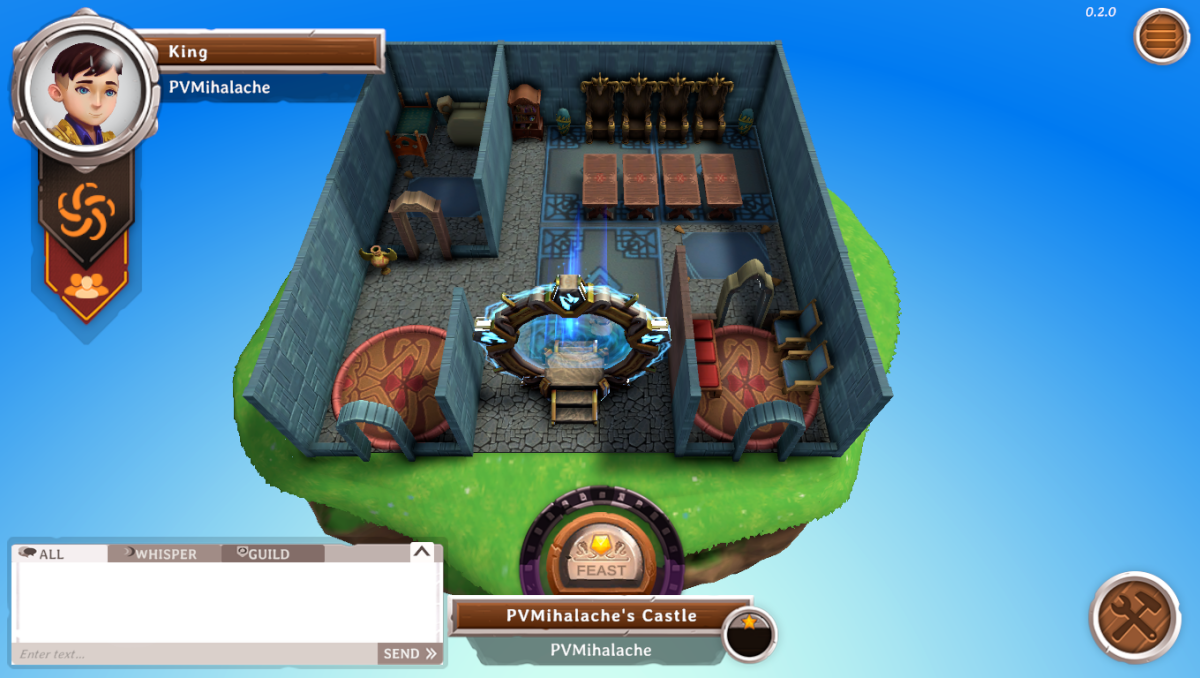 Infinity Skies greatness was achieved through the out-of-the-box thinking and passion of the team. The team has over 23 amazing individuals, and will expand even more this year. Their vision is to create an epic game that will be loved and appreciated by all the players, a game made by gamers.

Sander Dijkens is one of the the DreamFuel Games co-founder. He has experience in Java game development and game programming. The hopes that Infinity Skies will bring innovation and the game will rise above the blockchain gaming mainstream. Marc Bruinsma background and passion is gaming and technology. He started blockchain exploration five years ago, investing in numerous projects. The started the DreamFuel Games with his childhood friend Sander, as a life-changing adventure and a desire to set a golden standard for the future of blockchain gaming. Micah Hrehovcsik was Sander's lecturer at HKU University of the Arts Utrecht. He worked on over 30 gaming projects and through Game Architect Studio he provides expert knowledge in game design and technology. He works with Sander and Marc to make Infinity Skies the state-of-the art for future games. Tricia Dougan is the Infinity Skies CMO and is leading the market team. She has a B.A. in International Business and years of experience in the freelance world. She has been in the crypto space since 2016, and travelled in over 15 different countries, all while working with different agencies.

Guido Boogard is the Lead Game Developer. He has advance UX designing and software developing skills, and 10 years experience in developing over 30 games and apps for PC, mobile and VR.

Danny Kundzinsh is the Lead Concept Artist and Illustrator. He worked for a plethora of projects in the last decade, including Marvel.