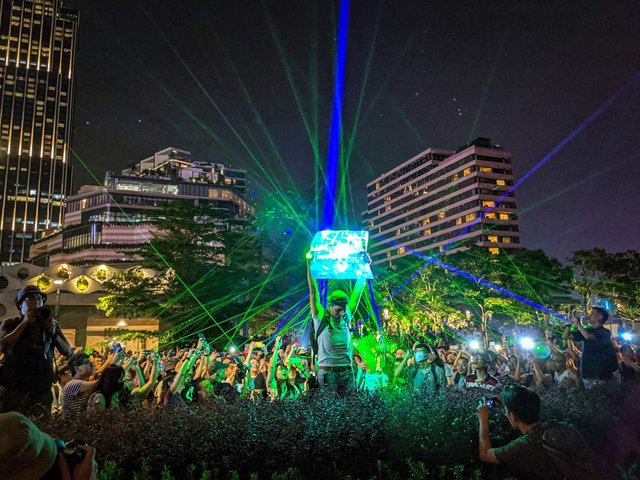 The six beautiful sides of the Hong Kong Protest

If you've been following my posts on the recent democracy protests in Hong Kong, you may remember my last one was about whether the police force are working with the triads.

That was nearly three weeks ago, and since then the Hong Kong Police Force have done very well and pissed off more and more people every day.

I could go on and on with the list, but I won't because no matter how much the police abuse their power, they won't be held accountable for their actions. The Hong Kong Goverenment refuse to hold an independent inquiry because the Commissioner says it will hurt the feelings of the 30,000 police officers.

Whilst extremely annoying and frustrating, the actions of the police have actually united a lot of the Hong Kong people. The protests have bought out the best of many HKers, and showed us the beautiful side of the protest including some amusing moments.

Lennon Walls started in Prague Poland in the eighties in response to anti communist movements. They have spread up all over Hong Kong now and some have even become a work of art. People write messages on the colourful sticky notes and stick them on the walls to voice their opinions and grievances. Lennon Walls can be found in many places outside of Hong Kong, such as London, Taiwan, Australia, Canada, and the Berlin Wall in Germany. The video below show the largest one in Hong Kong and the photo below is from my friend in London. The protests have spilled over to normal neighbourhoods as more and more people are losing their trust in the police. Many come down for a walk after dinner ended up congregating outside the local police station to air their grievances and dissatisfaction. On one occasion, glass bottles were thrown from the high rise accommodation quarters inside the police station, onto the crowd. Luckily no one was hurt. On other occasions, the scene has turned violence and the police have responded with tear gas on unarmed citizens in shorts and flip flops. Many of the protesters are the younger generation and have used their own money to buy proper gear such as face mask, eye googles to protect themselves from the tear gas and rubber bullets. They are not exactly loaded with money.

During some of the protests, citizens have left loose change or extra tickets by the ticket machines inside the train station. Protesters can quickly grab them and leave after the protest, and it avoids having to use their own smart travel card where their movements can be traced.

People have been queueing up to donate super market vouchers and eateries coupons for the protesters. A friend of mine was nearby one of the protest and was given a packet of tissue by an aunty. When he opened it, there was a gift voucher inside. On Monday 5th August, a general strike was held in Hong Kong. Whilst this didn't bring the city to a complete standstill, the stock market dropped 777 points at noon. What's the significance of this? The Chief Executive of Hong Kong Carrie Lam was elected by a group 1200 people, most of whom are pro China and handpicked by the CCP. Carrie Lam won with 777 votes hence her nick name (amongst others which I shan't name here) is 777. During the general strike a couple of franchised shops selling fruit tea closed in support. They belong to a group called Yi Fang from Taiwan. Yi Fang have nearly 200 stores in Taiwan, 29 in Hong Kong, and over 1200 in China. China represents half of their turnover. Yi Fang condemned the strike and protest in Hong Kong and said they would sue those shops for breach of contract. This immediately caused a massive uproar in both Hong Kong and Taiwan, and netizens vowed to boycott Yi Fang. I used to go to Yi Fang quite often, thanks but no thanks in future. Even Taiwan's President has weighed in on this and issued the following which says "Fruit tea is best when its natural and you have the freedom to choose the amount of sugar and ice. It doesn't taste so nice when you add in political flavour" On Tuesday 6th August a university student purchased ten laser pointers. They were for star gazing when they hold their orientation camp for new students at the beginning of the term. When he left the shop, five guys immediately stopped and grabbed him. After some altercation one of the guys finally identified himself as a police officer and they arrested the student for possession of dangerous weapons, in police terms "ten laser guns".

Citizens, including astronomists rediculed this claim and held a mass star gazing protest outside the Hong Kong Space Museum the next evening. The Laser Show incident is a classic example of the best and worse that can happen in Hong Kong.

The police didn't have a case to arrest the student but they still went ahead, just because they could. They clearly knew their case would fall through so they didn't care that they broke the chain of evidence. They used one of the laser pointers, or laser guns according to them, and did a demonstration in front of the press to show that it could burn through newspaper if you held it at close range for ten seconds. This renders the evidence inadmissable in court.

On the bright side, many people turned out to the laser show protest did so peacefully, as have the majority of the protests have been until the police turned up in provacation full riot gear. The crowd were having fun playing with laser images and projecting hand puppet shows on the Space Museum. This was accompained by Star War music and turned into a big happy party. Something needed by many under the current circumstances.

Unless stated, all photos are mine and co.