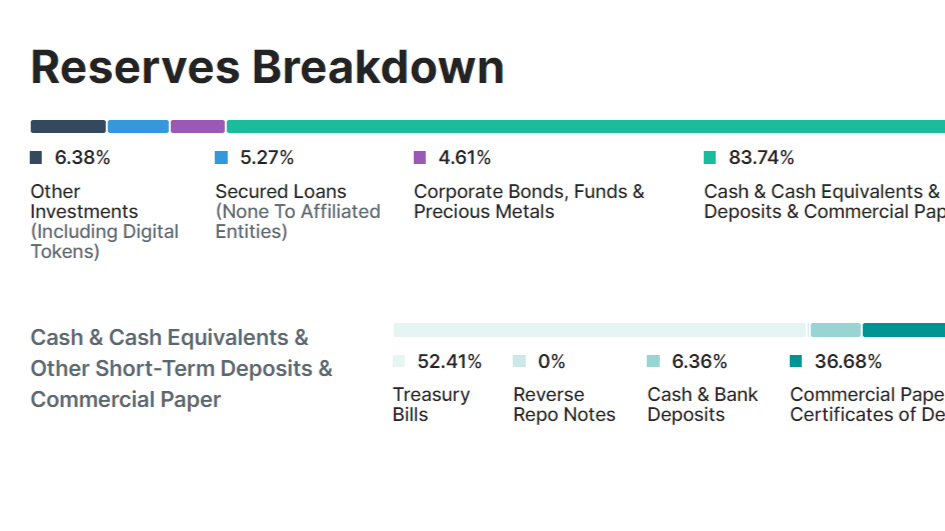 Tether is in the news these days for various reasons. Let's take a deep dive and find out how legit Tether actually is.

Tether claims in its transparency page that it is fully backed. Of course they would. Here's what they claim (and there are lies in it, scroll down to know why):

These numbers are from the last report which is from 31 Dec, 2021. They were supposed to publish another report on 31 Mar, 2022 which they didn't and the reason is because they aren't fully backed. You of course wouldn't want others to know that you don't have 100% of the backing. Even if they don't say, we can make an approximate calculation based on that few month old report. Let's do that.

"Other investments" is a fancy way of saying cryptocurrencies. With the recent dump, the most pessimistic outlook would be that they have lost 50-70% or so of that 6.38% in "Other investments". That would mean they have about 3%~ish in it. Assuming all other figures are accurate, Tether would then have a reserve of 96.62%. And the optimistic view would be a loss of like 30% which would mean a total reserve of about 98%~.

Now, let's account for all the other stuff. Secured Loans are generally liquid. Bonds and Metals I believe are also covered. They might have made some more with the rise of gold prices. xD

In the Cash & Cash Equivalents section, T-Bills and Bank Deposits are secured (best cash assets). The Money Market Funds is also a small portion hence I will take that at face value. The biggest issue is the 36.68% in this section which is 30.715% of the total reserve. Here's its breakdown: Tether has 11bn for both A1 and A2 graded papers. These are generally good and A1 graded papers almost never default. A2 and A3 are not that bad either. The Other graded ones are junk bonds. I wonder why the auditors didn't say what they are. Maybe that fat check they received had some conditions? So, that's 300m of trash which is like 0.5% of total reserves. Even if we pessimistically assume that these are defaulted bonds, it wouldn't have much impact.

So my most pessimistic outlook for Tether is that it is 96% backed and most optimistic is 98%. So, yes it is true that Tether is not fully backed right now, and it is probably between 96-98% backed. But that doesn't mean it is going to implode and go to zero like Luna.

Ok, but you might say that they are just lying about these numbers in the report published on 31 Dec, 2021. No, they are not lying and CFTC has verified that Tether has had fully backed reserves for 27% of days for 2 years and they are under active surveillance by the US authorities and CFTC.

As found in the order, Tether held sufficient fiat reserves in its accounts to back USDT tether tokens in circulation for only 27.6% of the days in a 26-month sample time period from 2016 through 2018.

The order also finds that, instead of holding all USDT token reserves in U.S. dollars as represented, Tether relied upon unregulated entities and certain third-parties to hold funds comprising the reserves; coming led reserve funds with Bitfinex’s operational and customer funds; and held reserves in non-fiat financial products. The order further finds that Tether and Bitfinex’s combined assets included funds held by third-parties, including at least 29 arrangements that were not documented through any agreement or contract, and that Tether transferred Tether reserve funds to Bitfinex, including when Bitfinex needed help responding to a “liquidity crisis.”

What the above statement means is that the total reserve was oscillating below or above 100%. The fact that Tether was fined is a good thing. It verified how legit tether is and pushes them to stay legit.

The above context assumes a normal market environment. But won't it just go to zero in a bank run (a very fast one) causing a massive Bitcoin crash?

Lol, yes but no. If people want to sell 84bn, that money would have to go somewhere. And while most of it might be redeemed, a major portion would require a safe haven which will be Bitcoin. So, in the beginning BTC might crash 30% but it will go up 200% or more if a bank run within say a few days were to happen. And 94% of tether backing is in traditional assets.

The traditional markets will definitely feel the pain as tether will be forced to sell 75 or so billion in trad assets which could cause a crisis in the traditional markets. The funny thing is, this is the reason why CFTC went after Tether. Its main job is to protect its wall street masters.

If you find any discrepancies / inaccuracies in this post, feel free to point that out in a comment. Do consider following my Twitter. I did speak against Luna even before its dump. Here’s a thread where I trashed Luna.

Blogs and articles authored by @littleboy.