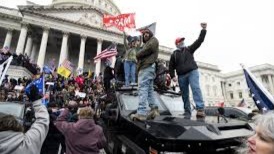 Trump Supporters have stormed the United States Capitol in an effort to stop the Electoral votes from being counted. I will definitely write more about this later, but I wanted to get something out about this immediately as it is happening.

This is just pathetic and counter-productive. It wont work to change the result. It also just serves to make the entire American Right-Wing look like they are authoritarians who oppose Democracy.

I've written a lot about how Antifa engages in violent, illogical, and frankly stupid activity. One of my main criticisms of AntiFa from the Left has been that they are counter-productive. This is more counter-productive than anything AntiFa has ever done.