Hello and welcome to my first blog on Publish0x.  In this blog we will visit Lalibela, Ethiopia and its splendid rock-hewn churches.

Lalibela is located in Northern Ethiopia, and named for the Ethiopian emperor of the same name, whose rein spanned the 12th and 13th centuries. Lalibela was the second capital of Ethiopia established after the fall of the Aksumite kingdom in Aksum. There are a total of 11 rock-hewn churches within the city accredited to Lalibela's reign, although their actual origin is a matter of dispute among experts. These churches have been declared a world heritage site by UNESCO, and many have had preservation measures installed such as canopies.

I arrived in Lalibela by flight in the afternoon, but decided not to waste any time. I found a guide, who took me to the churches of the northern group. As a tourist, you pay a fixed fee to visit all of the churches, which is valid for 5 days. You could easily see all 11 in a full day. 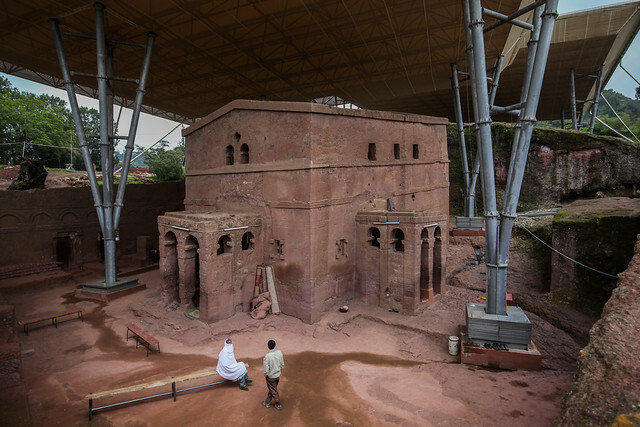 1: Bete Maryam (House of Mary) was my favorite of the churches in Lalibela, particularly due to the well preserved artwork throughout. The covered archways are also a unique feature among all of the Lalibela churches. It is thought to be the oldest of the them. 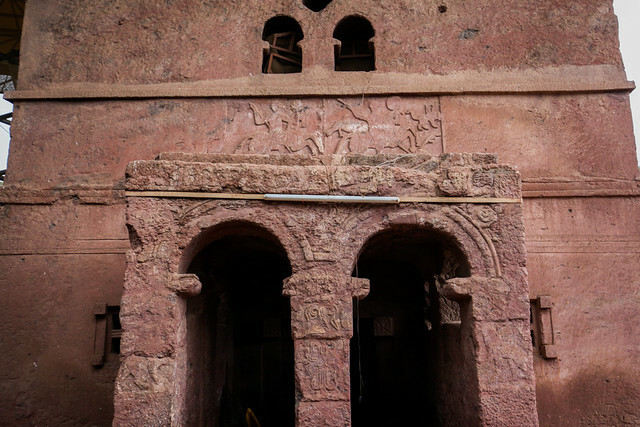 2: Above the main covered entrance of Bete Maryam is a damaged but still discernible relief depicting the legend of St. George slaying the dragon. The artistic depictions of this legend is among my favorite Ethiopian cultural art and Christian art in general. After all what self-respecting geek doesn’t like dragons? 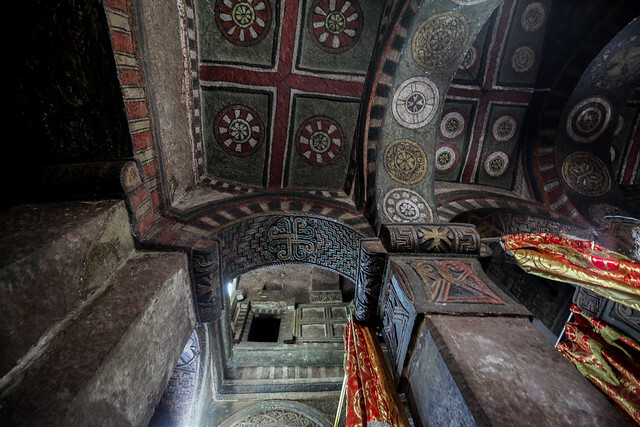 3: Both the ceilings and pillars within Bete Maryam are richly decorated with both carvings and frescoes. It has the most well-preserved artwork amongst all of the rock-hewn churches in Lalibela. 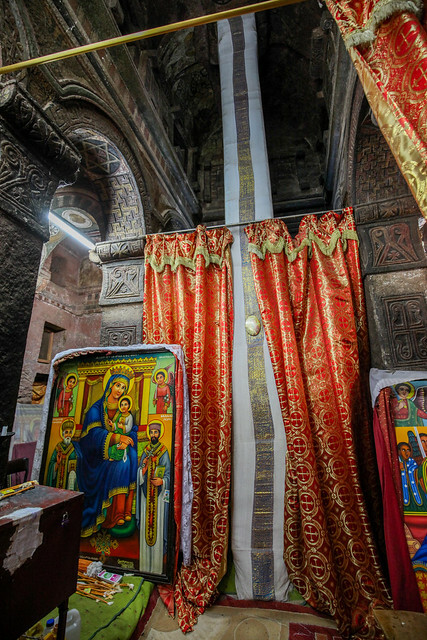 4: The central column in Bete Maryam is thought to be sacred as it appears to reach into the heavens. It is kept wrapped in gold embroidered cloth. 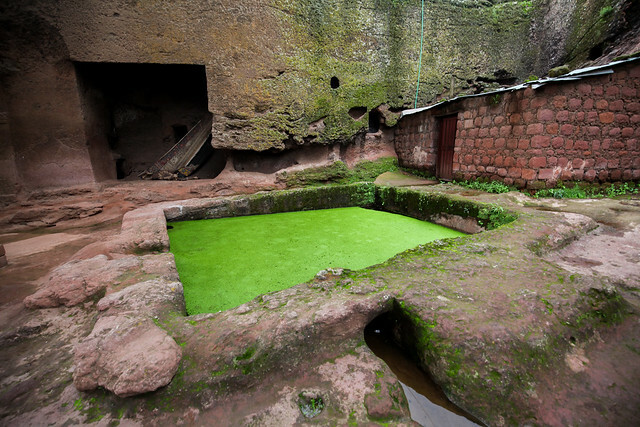 5: The baptismal pool located outside of Bete Maryam, is bright green with algae. I was told the pool is still used to this day, but I’m guessing it must not get used during the current rainy season. 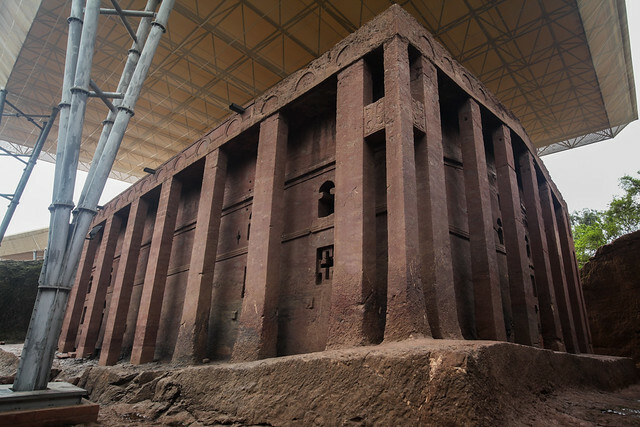 6: Bete Medhane Alem (House of the Savior of the World) is the largest and most imposing of the rock-hewn churches in Lalibela. It is also home to the sacred artifact, the Lalibela Cross dating back to the 12th century. 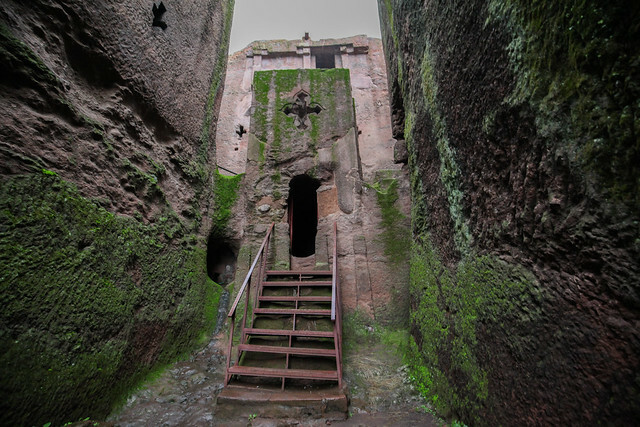 7: The Tomb of Adam is a symbolic tomb that serves as an entrance to the church complex. It is basically a gatehouse carved entirely out of a single block of stone. 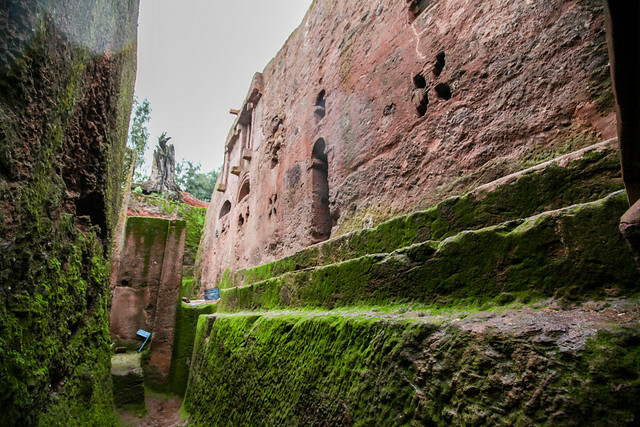 8: Bete Meskel (House of the Cross) was the most difficult of the churches to photograph, with only a few meters of space between the church and the stone it was carved from. It was also the most treacherous to enter, with wet slippery algae all around. 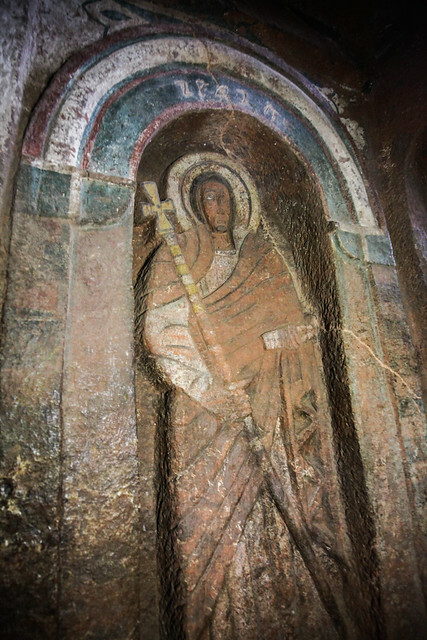 9: The interior of Bete Meskel has a number of saints carved into the walls. Some were in better shape than others, with this particular one retaining much of its color. 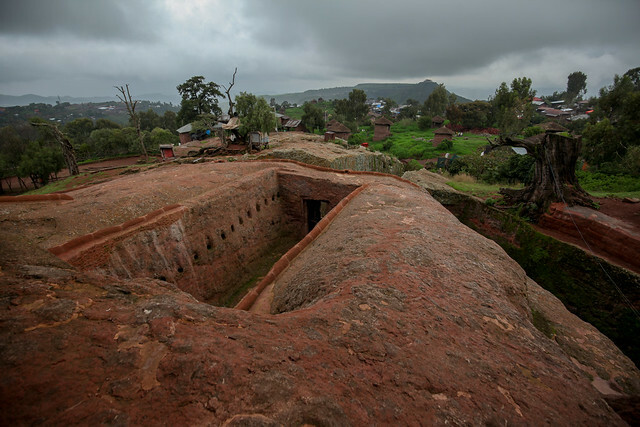 10: Besides the churches, there are a number of other underground structures dotting the area. It is not clear what purpose this particular building served, but you can see the holes carved into the rock ,where beams were probably inserted to accommodate a roof or a second floor. Also in the distance you can see some traditional huts. I was told that these huts were inhabited until recently, and the residents were relocated as part of the larger effort to preserve the churches.

Thanks for viewing! I hope you enjoyed this post.