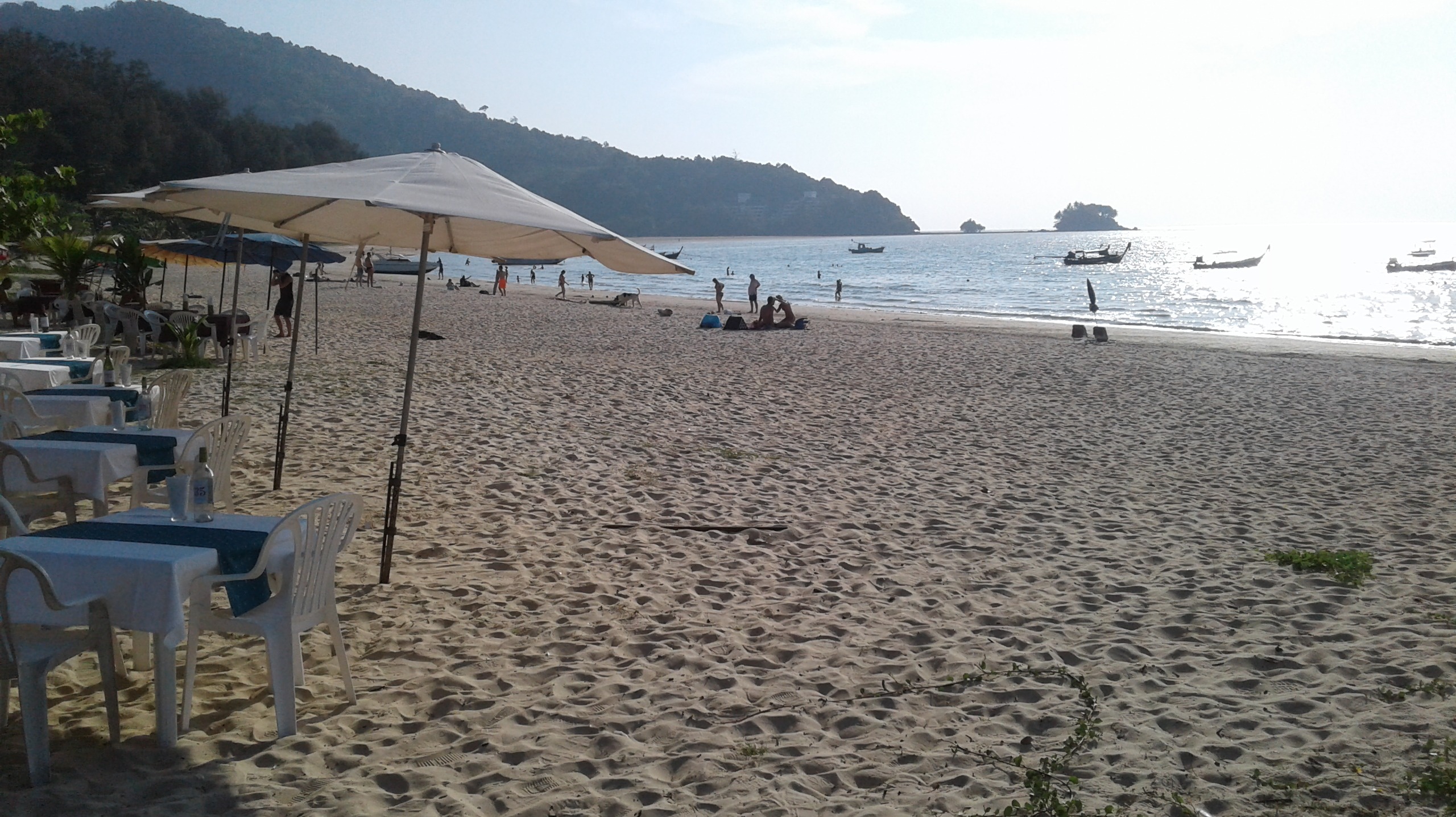 I flew into Phuket International Airport from Toronto with a layover in Seoul in March 2018 to begin what would become a 20-month solo backpacking trip across Asia.  I landed right around midnight, and having left in a snowstorm, I emerged to 30C and thickly humid air in the middle of night.  I'd booked two nights at a hotel right next to the airport in the town of Naiyang, which was built on a short stretch of one-lane highway that ran from the airport down further south on Phuket peninsula.  I was able to eat and get all my sim card/money exchange business dealt with the next morning just in the buildings around my hotel, which was right on the main highway but looked back on a field of tall grass and green palm trees.  Overall the town of Naiyang was fairly small and unremarkable, but it suited me very well just to crash after a long flight ordeal (there was a computer issue at Pearson airport in Toronto and my flight was delayed by 3 hours - the exact amount of time I had for my layover in Seoul.  I had to run through 3 terminals and 2 monorails to barely make it to the back of the boarding line.)

Naiyang also had a beach, called Naiyang Beach.  It was pretty nice.  It was long, with soft, light sand, fairly empty compared to some other Thai tourist beaches.  One element that helped was it had a layer of dark green pine trees between the beach and the road just nearby that had all the restaurants, tourist shops, and massage huts, so you felt pretty isolated from civilization walking along the beach, even though there was plenty of development nearby.

At the very south end of Naiyang Beach is an abandoned mega resort, which was just left open and exposed for anyone to walk up and wander around.  I suspect it was irreparably damaged in the tsunami of 2004, and has just been left there since.  I walked around the pool deck and up to the first balcony level, and it seemed like you could go all the way to the top, but the sun was setting and I was tired, as it was a really long walk down the beach.

The massage huts along the beach didn't seem particularly seedy, and so I went for one.  It was a Thai massage, which I found very rough, bordering on painful, and figured I'd try a different one next time.  There were a few bars along the main road gathering a crowd, but I slept and woke very early for my first few days in Asia.  It wasn't til I moved on to Patong that I dabbled in the nightlife scene.  The next morning I got a bus into Patong from a station nice and close to my hotel, and there my trip really got underway.

Overall I'd say I got a bit more than I expected from Naiyang.  It was just meant to be a stopover to get myself set for the long haul in Asia, and it was very convenient as such, but I very much enjoyed the beach and resort there.

Also on the back of a pickup truck in Naiyang, I saw a sticker that read 'Phuket Says No to Dolphin Shows', and I would like to iterate from the outset of this blog that there are a lot of animal-based attractions in Asia, and pretty much any dolphin show, tiger petting zoo, or elephant ride is seriously abusive to the animals and should not be supported.  If you're on safari in a national park and looking at animals through binoculars, that's cool.  But don't give your money to abusive and greedy businesses just to get a selfie next to/on top of a big animal, you look like a douche anyhow.

I think I was here