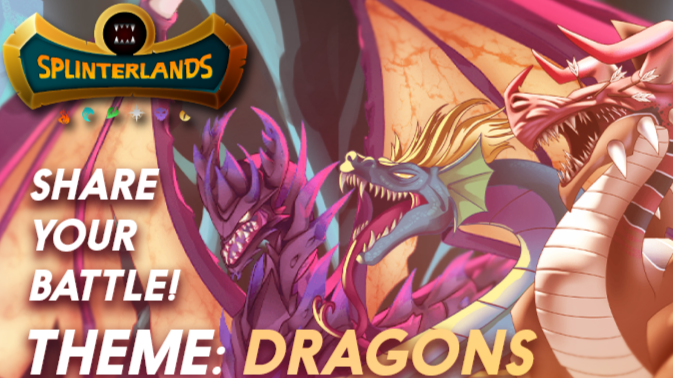 Every week there is a Splinterlands challenge to share a battle using a specific splinter and on this week's post it is a dragon card. I also encourage Splinterlands players to partake in the challenge because you get to try different strategies and earn some crypto in the process. Zyvax Vuul is a dragon splinter card that costs 8 mana. It starts with the flying ability and the recharge ability. At level 2, it learns close combat and at level 4, it learns deathblow. Both recharge and deathblow are new abilities released with the chaos legion sets and I have not used them much. Recharge makes the monster attack every other round (every 2 turns) but deals three times the damage. Deathblow deals double damage when it is the only card left on the opponent's side.

I do not use this card much but I wanted to play around with this card because of the recharge ability. I only have a level 1 version of this but just having the flying ability and 8 health makes it a worthwhile tank in my last position. If it was level 2, I think it might make more sense to put this card earlier but it is a fairly strong card either way.

The ruleset this time is taking sides. This means that I can't use neutral monsters. I have 50 mana available and access to water, earth, and dragon splinters. At least I don't have to think about other possible advantages and disadvantages under this ruleset. It will just be a standard battle based on the cards I have available. The summoner I choose to use this time is Byzantine Kitty. With 50 mana available, I plan on keeping some high health cards in my lineup so the tank heal will be useful. On top of this, the +2 speed is a game-changer in many fights. The last ability gives true strike to all my cards so I never have to worry about my cards missing their attacks.

My plan is just to have Unicorn Mustang in front to deal with any magic builds followed by a manticore as my reach monster. After that, I think Kron with his self-heal would make for a strong tank combined with Byzantine Kitty. For my last three positions, I went with Dragon Jumper, Sporcerer, and Zyvax Vuul. I went with them due to their abilities and removing shields is never a bad thing.

At the first glance of my opponent's lineup, I believe that I have the advantage. With the Sporcerer negating the shield and my kitty giving me more speed compared to my opponent, I am able to completely negate my opponent's summoner. The extra speed also means that I will be attacking first and I should be able to make quick work of my opponent. I lost my Unicorn Mustang but I was able to take out 4 of my opponent's cards. So I don't think it was a bad trade-off. Since I can't miss, I don't see any way of my opponent winning this fight. After that demented shark is killed, my opponent won't be able to attack.

Without any suspense, I was able to wipe out my opponent and end the match.

The battle this time around went exactly as I expected. I was expecting to see some magic monsters but my cards were fast enough to finish off my opponent. So there were no real problems even if they did not use magic monsters. The Sporcerer and my summoner negated any benefits my opponent had from his summoner. With this in hand, I was able to make quick work of some cards on my opponent's side and win the match without much issue. The Zyvax Vuul deals quite a bit of damage but I am not sure if I like every other turn aspect. However, I do think it makes for a great card on the last spot to deal with sneak monsters.

Byzantine Kitty was a great choice as a summoner as it made my monsters attack first. I don't think the tank heal made too much of a difference but it still helped. It definitely is one of my favorite summoners when there is a decent amount of mana available. My opponent's lineup was quite formidable and I do think it would have been closer if I did not remove the shield. So I am happy that I used Sporcerer to remove this buff.

What did you think of my match? Was there anything you would have done differently? I think it is quite interesting to see how different players use the same card.