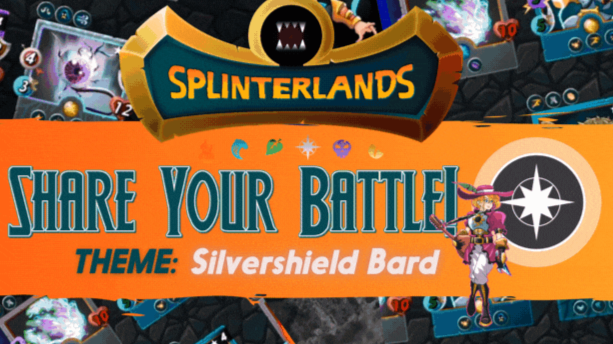 Every week there is a Splinterlands challenge to share a battle using a specific card and on this week's post it is the Silvershield Bard. I encourage Splinterlands players to partake in the challenge because you get to try different strategies and earn some crypto in the process. This card is a support card and it does have some physical damage at level 2. I don't have the summoner level nor a high enough level Silvershield Bard to get the swiftness skill (+1 speed to all cards). So I want to aim specifically to have the cleanse help my tanks live longer as I do more damage. I decided to purchase a level 2 Shieldshield Bard in Monster Market. By purchasing it through this market, I ended up getting back 3% of what I spent on the card. The received value is after the 5% tax is removed and 60% of the revenue is 3%. I choose the level 2 Silvershield Bard because I wanted to be able to use this 1 mana monster in physical only fights in the future.

The rule set for this match is enrage and blast. I didn't know how to specifically take advantage of this set but I decided to go with the summoner Byzantine Kitty to have tank heal. The extra +2 speed and true strike ability should help me deal damage. My plan for this the follow match is to keep my tanks healed while dealing enough damage. I plan to have everything work out by having my summoner's tank heal every round so my monsters have more rounds to do more damage. It will be a battle of endurance because of the Blast Rule Set. I saw the match and I saw that there the only debuff on the opponents side is to remove the -1 physical attack. So my Silvershield Bard isn't as useful as I would think. I have mostly physical monsters to take advantage of enrage but I don't like my opponents line-up. It is full of magic damage so I don't know how many of my cards can survive. It is already looking bad for me with two of cards down and none of my opponents cards have died due to his resurrect skill. My Shieldshield Bard was not useful because its turn was last so my Chain Golem did not get the extra damage. I am disappointed as the Chain Golem had no chance to attack after being cleansed. I was also hoping my Dragon Jumper would kill the Divine Priest so he would not heal but I had no luck. At least the sand worm is dead. The healer is dead now but I won't be able to attack after this round because my Dragon Jumper will die from the remaining attacks. All I have left is Cornealus and I killed off another card on the opponent's side. Cornealus has the heal ability and my summoner has the tank heal ability so it will depend on whether or not he can kill me off.

As the battle continues, I find out that he can't kill me so I will fast forward to Round 22 since nothing changes until fatigue kicks in. No change but I will win when fatigue kicks in next few rounds so I will skip forward to the end of the battle at round 23. As you can see I won by outlasting my opponent. It was a really close fight and I could of easily lost if the Sand Worm did not die in round 2.

The battle did not go as I expected as the opponent had a bunch of magic cards while my tank's ability was for physical monsters. I wasn't really able to kill off most of my opponents monsters and had no choice but to rely on outlasting my opponent. Although the cleanse did happen once during the fight, it was completely useless as my cleansed monster died right away. So in the end, the Silvershield Bard only served to take an extra hit in the fight.

I rarely see fatigue kick in because it requires over 20 rounds to finish a match. I do think Cornealus with both tank heal and the heal ability is incredibly powerful. The combined heal from both skills heals at least 7 HP per round which meant my opponent had no chance of killing it off.