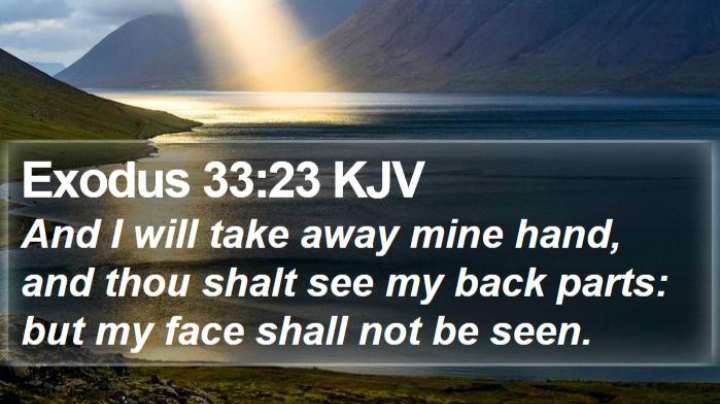 The Bible Says Moses Seen The Backside Of God The Father!!! Or Does It???

First off I want to apologize to my followers because since I went back to work I haven't had the time to make new post. I've been working 12 to 14 hours a day so on my days off I've mostly been resting. I'm not trying to make excuses. I'm only trying to be honest. I tend to write about things that I was taught growing up that I've found through reading the Bible to be wrong and I plan to continue doing so. I don't like to write these post without doing a great deal of studying/researching. I really do enjoy the whole process but I will only be posting every once in a while until things slow down some at work. With all that being said here's what I want to share with everyone today😊.

22 And it shall come to pass, while my glory passeth by, that I will put thee in a clift of the rock, and will cover thee with my hand while I pass by:

23 And I will take away mine hand, and thou shalt see my back parts: but my face shall not be seen.

So this is after Moses received the Ten Commandments that God wrote in stone with His finger. Moses asked God to see His glory and God basically told Moses that he couldn't see His face but He would let him see His backside.

So now let's go to the book of John (my favorite book😊).

18 No man hath seen God at any time, the only begotten Son, which is in the bosom of the Father, he hath declared him.

Now lets look at some of the things Jesus said (the words written in red).

46 For had ye believed Moses, ye would have believed me; for he wrote of me.

47 But if ye believe not his writings, how shall ye believe my words?