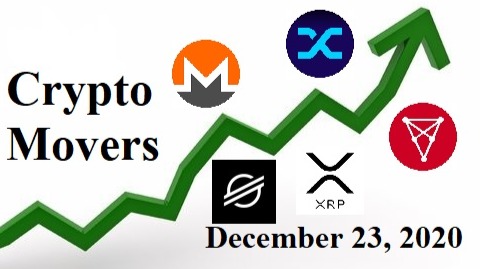 Welcome to “Top 5 Cryptocurrency Movers” where I look at all the major crypto coins on the market and choose the five that made the biggest move (either positive or negative) on this day, explaining my thoughts why the move happened, as well as the historical significance of the particular crypto. Here are my top five cryptocurrency movers for December 23, 2020:

Chiliz, the world’s first tokenized sports exchange is in the news again, after Binance announced they will feature three more sports fan tokens on their exchange: Atletico de Madrid Football Team (ATM), AS Roma Football Club (ASR), and Dota 2 E-sports team (OG). This is after the success of the first two tokens from the Juventus and Paris Saint-Germain (PSG) teams, and more sports fan tokens could be in the works.

Fears for XRP investors were realized when the United States Securities and Exchange Commission (SEC) filed a lawsuit against Ripple last night, sending XRP crashing more than 32%. The suit claims that XRP is an unregistered security and by Ripple selling it to the public, it violated investor protection laws. Ripple is already fighting the allegations, but some exchanges have began to delist the cryptocurrency.

Feeling the effects of the Ripple decline the hardest was Stellar because of the many similarities it shares with XRP, most notably a shared founder. While the two coins are different, they have nearly identical code on the blockchain, both coin supplies are controlled by the developers, and both use distributed ledger technology. The Stellar Lumens coin XLM fell 14% with the future of the cryptocurrency uncertain.

Synthetix continues it’s meteoric rise, gaining another 22% today after being listed on Coinbase earlier this week. Other upgrades to the Synthetix Network Token include interface improvements and a new decentralized app for staking and trading of the specialized token on the Ethereum network. SNX has almost doubled in price this month alone.

Monero was the biggest beneficiary of Ripple’s downfall today, rising over 6%, more than any other major cryptocurrency. XMR labels itself with three words: secure, private, and untraceable. This privacy has led to many fans for Monero with the price increasing 250% on the year. While XMR uses a public ledger for its transactions, no details are made to the amount, source, or destination, meaning the transaction is done completely in private.

Thank you for reading today’s post! If you enjoyed it, please drop a like and follow for more content. Please note that these prices are as of 2:00 PM EST/11:00 AM PST on the given day, and might not reflect the current price of the coin at the time of viewing this post.