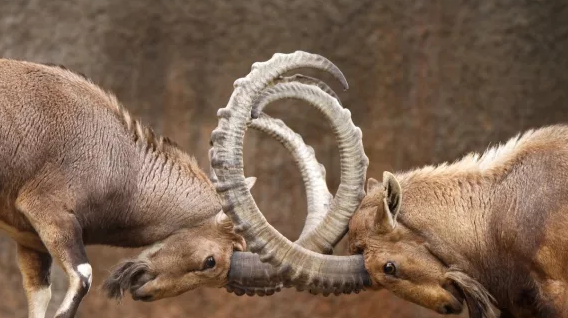 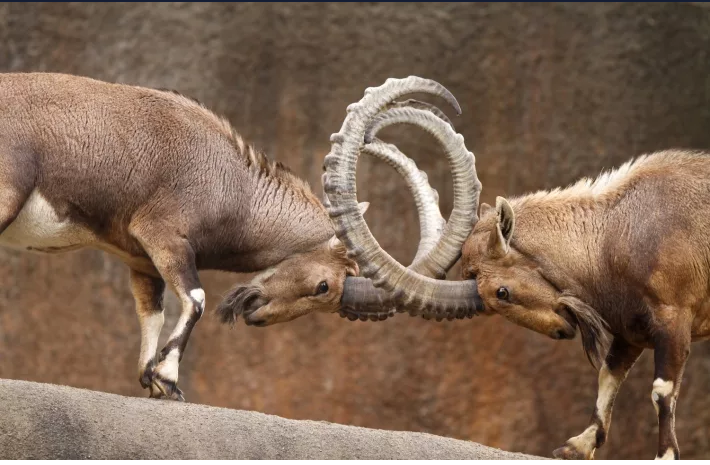 One would have thought that with HIVE Blockchain, a fullstop was put to the fighting that was happening between Justin Sun Tron Steemit section and the other leading original Steem witnesses, who were running the Steem Blockchain and wanted to maintain the chain’s ‘status quo’ that was getting challenged by the new Steemit leadership sperheaded by Justin Sun.

However, now new news from this month of April emerges that the current Steemit Witnesses obviously on Justin Tron front side are implementing a softfork ‘softfork22888’, freezing accounts of certain Top Steem witnesses that supported the HIVE hardfork.

So the account of BlockTrades is frozen and accounts of earlier top Steem witness insurgents who supported the creation of HIVE chain like Roeland Lanparty are also frozen..

The reasons given for initiating 'softfork22888'

You can see the account names here on the Github library 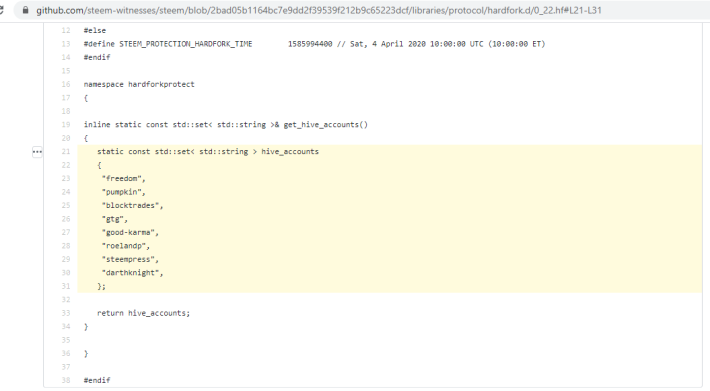 Further, points that offended the Steem side are the following -:

Also it was mentioned that these HIVE account holders were downvoting posts with opposing views from them.

HIVE price falls while most crypto prices are rising now

Right now, HIVE tokens are moving in the opposite direction of the crypto markets where since yesterday general crypto prices have been rising in value. 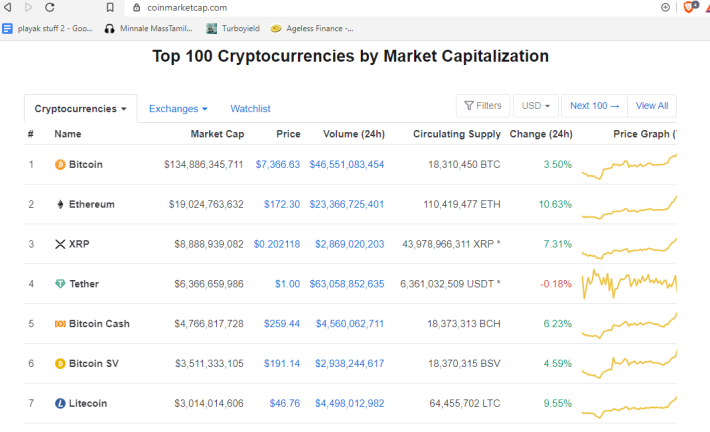 HIVE has fallen by about 30% yesterday and today it’s fallen by 10% again(when I checked up that is). 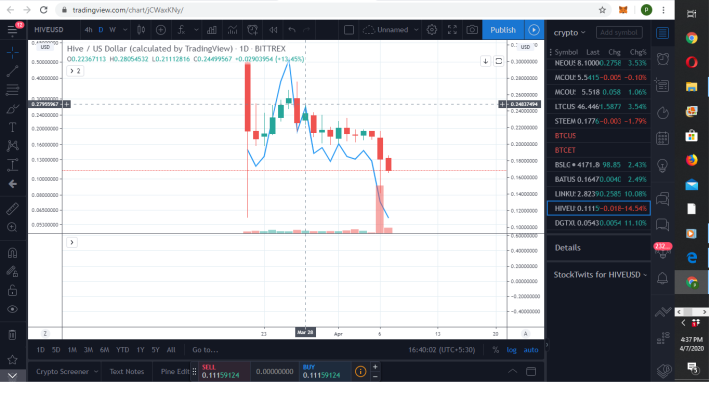 Hive Price has been outperforming Steem for a while

However, there were times when HIVE price was performing better than that of Steem which many said indicated that HIVE in the long run would be more successful than Steem. 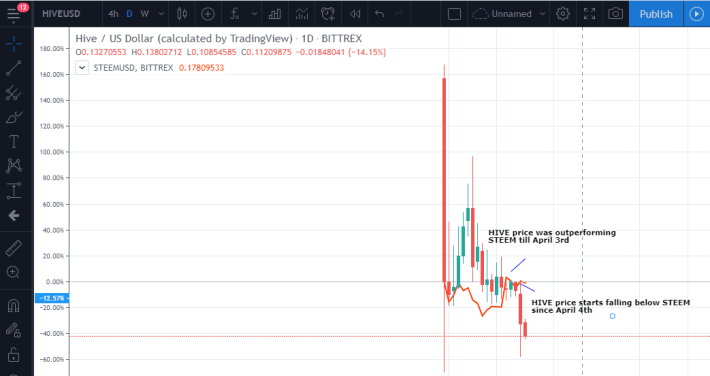 There were talks that maybe the Steem price would fall when all these HIVE guys that hold a lot of Steem power, power down, maybe due to that prospect the Steem Blockchain guys did this softfork, freezing accounts of these Steem holders now who are HIVE believers who knows?.

Well, whatever the reason...this fight is stupid, come on… HIVE is HIVE and Steem is Steem, close the chapter. The Steem front side, concentrate on developing Steem for a change will you?.

Right now, Steem Price may be held up, due to so many people still not having withdrawn their stake,and a Power Down takes 13 weeks for full Steem Power funds to become Steem,as Steem is released part by part one week at a time till 3 weeks full time period. 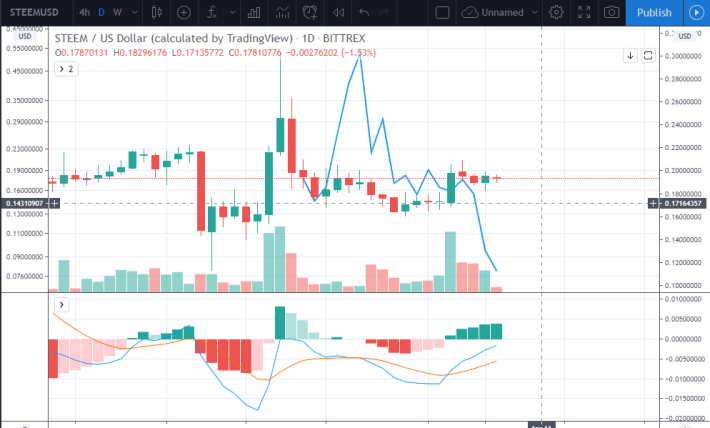 HIVE price maybe going through a correction since it rose 486%, it should be noted that HIVE has strong support as well at 0.08886509 region, as is evident from the rise in volumes and a uplift in the bottom wick of the green candle at this region. 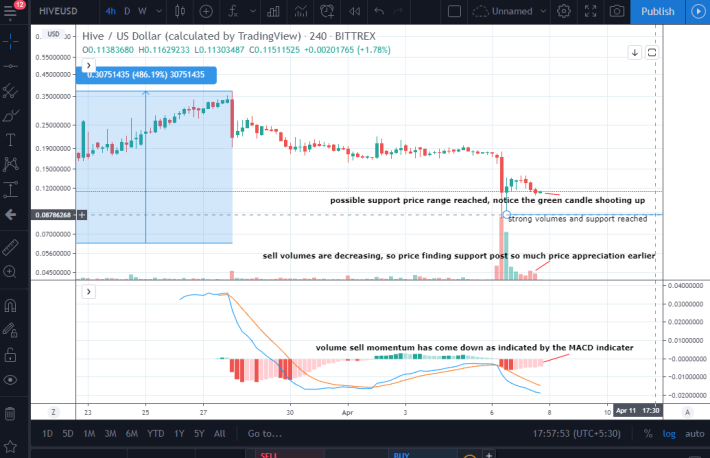 Some indicators at the 4 hourly chart like MACD, volumes show there in decline in sell volume momentum and a green candle is emerging, maybe at the current price 0.11445417 is finding support, which is not bad a tall.

HIVE price is 80% up from it's base starting price anyway

Infact as a person who has not invested in HIVE but got these tokens due to airdrops of my Steem wallet balance, I make 80% profits as HIVE token price started at 0.06284478 and after the subsequent rise and falls now the price is 0.11431769. 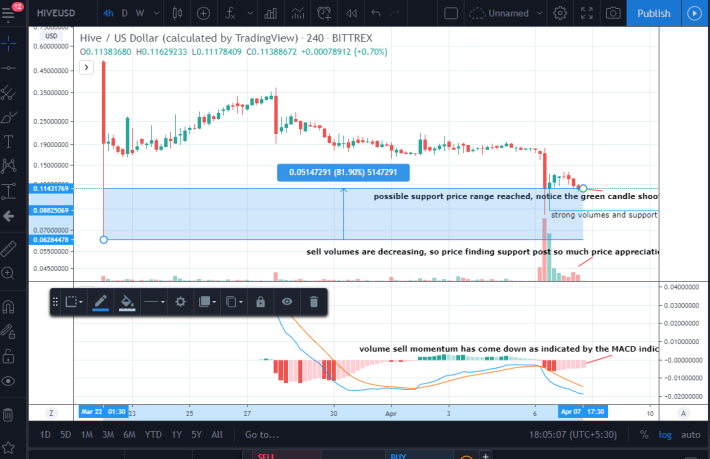