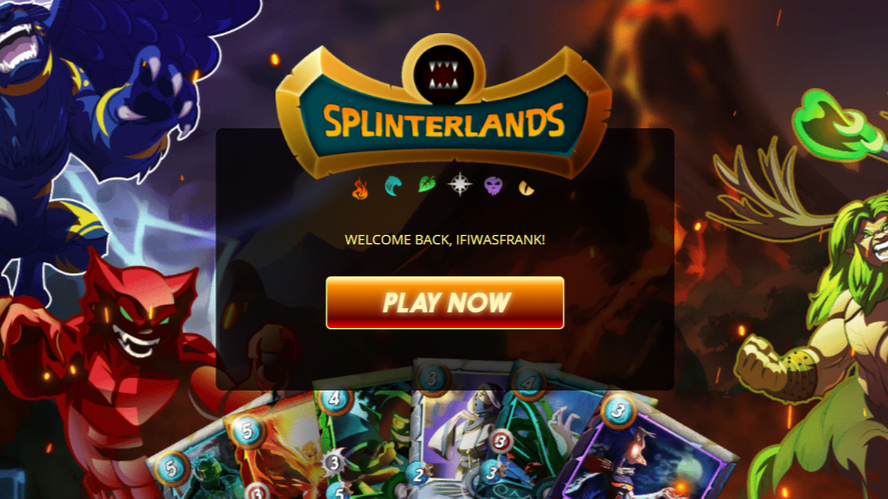 Beginner's Guide to Spliterlands, the most popular play2earn game on blockchain

In recent months I have written about many games implemented on blockchain, but the most attentive and informed of my readers will certainly have noticed that something were missing. Alien Words, Rising Star, Prospectors, are all very good projects , but in my opinion none can compete with Splinterlands. If you have been in the crypto world for a while, you’ll surely have heard of the most famous trading card game on the blockchain word (and soon, in my opinion, the best game ever). If you are new to the crypto-sphere, Spliterlands will allow you to become familiar with wallets, tokens and NFTs trough the simplicity, speed and cost-effectiveness that only the Hive network can guarantee. A fun, fast and challenging game that will make you regret not having discovered it sooner.

The absolute protagonists are cards, naturally configured as Non-Fungible Tokens and therefore tradable or salable according to the owner's will, they can represent monsters to be sent into battle or summoners. We will have cards of different rarities (common, rare, epic and legendary), with different characteristics based on the type of monster, and belonging to one of the seven factions created in the Splinterlands universe: Fire, Earth, Water, Life, Death, Dragon and Neutral. Each monster or summoner can have one or more special abilities, such as increasing vital points or reducing the impact of a certain type of attack.
Matching cards, the famous duplicates, can be combined to level up the card itself and make it more powerful. But there’s more: the cards can be sold in exchange for crypto on different platforms (and therefore in exchange for different tokens). Even if the game was born on Hive, it is possible to connect to it with accounts of other blockchains such as Wax or Eos. Furthermore, thanks to crosschain technology you can link your wallets belonging to other networks, such as Ethereum or Binance Smart Chain, to the game, in order to have all the assets related to the game, but stored on other networks, under control and available when needed. You can trade the game cards on AtomicHub, OpenSea, PeakMonsters and other marketplaces. In addition, you can choose to rent cards for a certain amount of time to and from other players. In the image above, taken from my collection, you can see that each card has a series of specifications. Let's take the first card, "Harklaw", for example:

Let's move on to the actual game: to enter the magical world of Splinterlands, you just need to create an account and purchase the Spellbook for $10. The latter will allow you to have a basic set of cards to start playing with. By purchasing the Spellbook (through the PayPal circuit or paying with supported crypto) the player will have the opportunity to buy packs, cards or lands, earn DEC (one of the game's currencies) or Credits from the battles won, participate in season’s rewards or in daily missions and transfer cards or credits outside the game. In short, before purchasing the Spellbook, we will only be able to experience the game in trial mode, with the Spellbook the real fun (and earn) begins. When you register, a Hive wallet will automatically be created for you, in which the cards and tokens acquired in the game will be stored. Once you have the Spellbook and your Hive account, you can start playing for real. The game is not so easy and can be difficult at first. I still have a lot to learn after months of playing. Each battle can have specific rules and therefore we’ll hardly play two identical battles. Basically, at the beginning of each match we will have a certain amount of Mana: summoning a card costs a certain amount of Mana, we will not be forced to spend it all but we will not be able to overcome it. It will be necessary to choose a type of summoner in order to choose the monsters: if we select a summoner from the "Fire" faction, we will then be able to choose between Fire monsters and neutrals (which, as "mercenaries", can be summoned by all factions).
The monster will have different attack characteristics: Melee, ranged or magical. Usually, it is good to have monsters of the first type in first position, because those with ranged attack will lose the possibility to hit if they are in first position (so it will be better to deploy them in the rear). Monsters with magic attack can also attack from the first position but usually, due to their characteristics, they are deployed between melee and ranged attackers, in the middle. There are also monsters that have no attack abilities, but that will be worth fielding for their special abilities or to serve as a shield in first position against melee attacks. My advice, to start, is to watch some battles, read the "How to play" section (you’ll find it immediately next to the "Ranked" battles), study all the special skills present in the game and play a few practice games. With experience you will learn to field the best formation with the cards at your disposal.

Depending on the set of cards and on experience, the player will be able during the season (which usually has a variable duration ranging from 12 to 16 days) advance in the leagues by winning battles and by having a certain "Collection Power" (power given by the value of all cards held). You’ll starts with the "Novice" league, the only one in which losing games does not entail a retreat in the score, and then moves on to the "Bronze III" and up to the top, ie the "Champions I" league. Each league will have its own end-of-season reward (a number of chests containing cards, credits, DEC or potions) and a rule regarding the limit level of monsters / summoners that we can deploy, which will increase as we go up to the top leagues. In Splinterlands there are three tokens that have value: Credits, DEC and SPS. No matter how hard I try to wrap the Splinterlands universe into one article, I know I would fail. Let's say I tried to give you the essentials to get started, you’ll have to find out the rest for yourself. Among the points not covered and that I leave to you the pleasure of deepening, we certainly find the Land and the role they’ll have in the future developments of the game, the Events, that are configured as real virtual tournaments with specific rules that allow players to earn large rewards, the role of Potions and an in-depth study on the Guilds. Not to mention the community that revolves around the game and the benefits that can be obtained by being part of it.
On October 18, it will be possible to purchase the new Chaos Legion packs, but for more information and a more accurate analysis of this topic, I refer you to an impeccable article of the great @libertycrypto27. Among his articles you will also find several useful tips on how to maximize the returns from this magnificent game.

I hope this article will help you orient yourself within this amazing metaverse. Personally, I only regret not having started playing earlier, because I consider Splinterlands truly the best blockchain game currently out there. Now you have all the elements to evaluate whether to embark on this adventure, the choice is yours.

This article is a translated abstract of my prevoius post published on PeakD. I originally posted this translation on PeakD.

All unspecified images are taken from splinterlands.com

Useful links (to earn and help me earn):

The Sandbox: Join the Metaverse!

I am an Italian crypto holder with a degree in "International cooperation, development and human rights". I love reading novels and playing my guitar.

In the mood for crypto

The English version of my blog.