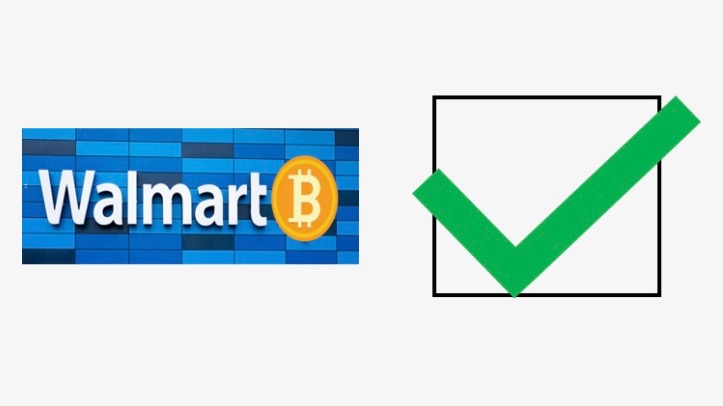 In an interesting turn of events, retail mega giant Walmart has rolled out the ability for its customers to easily purchase Bitcoin as part of their shopping experience. Interesting, but unsurprising. Many of you will remember the following comment I made just a month ago while addressing the fake news surrounding Walmart’s supposed partnership with the Litecoin foundation:

Even I couldn’t have foreseen being proven right so soon thereafter though.

That said, Walmart’s acceptance of Bitcoin makes a lot of sense. People are clamoring for access to Bitcoin. The success of the new Bitcoin ETFs released last week is proof of that. And Walmart is aptly positioned to help fulfill that demand, with over 11,000 locations around the world, nearly 5,000 of which are in the United States. Walmart has turned up the dial on hyper-bitcoinization, and both it and its customers will reap the rewards.

Lest anyone be confused, you won’t be able to buy real Bitcoin off of Walmart’s shelves. Ironically though, you can purchase a commemorative metal imitation Bitcoin on Walmart’s website and app.

In order to make in-store Bitcoin purchases a reality, Walmart has partnered with Coinstar, which has hosted its coin-cashing machines at Walmart locations for years, and Coinme, an upstart cryptocurrency exchange that claims to have the United States’ “largest cryptocurrency cash network”. Walmart is doing a test run with two hundred locations, but has plans to roll the service out to thousands more over the long-term.

The process for buying Bitcoin is relatively straightforward:

Granted, that ease of access does come with a price. Customers can expect to pay a 4% Bitcoin exchange fee and a 7% cash exchange fee. Plus, it’s rumored that Coinme is also charging a spread, meaning that the price you pay per Bitcoin may be slightly higher than what you’d find on premier crypto exchanges. At that fee level, it would likely be better for people to buy their Bitcoin on an exchange or mine it themselves.

Bitcoin ATMs, or BTMs as they are commonly called, have exploded in popularity over the past few years. For example, the number of machines available more than doubled in 2020 and is still growing at a similar pace in 2021. As mentioned before, it’s not hard to see why. People want access to Bitcoin, and some of them might be willing to pay higher fees at a BTM instead of buying their Bitcoin on a cryptocurrency exchange.

There may be another reason as well that people are using BTMs to buy their Bitcoin. Depending on the transaction size and the BTM operator, customers may get away with converting their cash into Bitcoin without having to complete KYC procedures or otherwise self-identify. That could be appealing to users who want to keep their activity out of the government’s watchful eye. However, that window is rapidly closing as regulators like the Financial Crimes Enforcement Network (FinCEN) in the United States are actively working to incorporate BTMs into their regulatory frameworks.

There is one key difference worth mentioning between Walmart’s Coinstar/Coinme BTMs and most others: customers usually scan a QR (Quick Response) code corresponding to their Bitcoin wallet address and the purchased coins are sent there rather than deposited onto an exchange like Coinme by default. Having the possibility to take direct possession of your purchased Bitcoin is preferable for many hodlers and it will be interesting to see whether Walmart alters its approach to be less restrictive over the long-term.

Bitcoin: This Is The Way

No matter your personal feelings about Bitcoin, its staying power is becoming more apparent with each passing day. Everyday investors are buying Bitcoin and then holding onto it for years in some cases. Hedge funds, banks, and corporations are actively trading it and, sometimes, keeping it on their balance sheets. And while some governments have embraced Bitcoin, like El Salvador with its Bitcoin law, other governments have seen the writing on the wall and are trying to stave off the eventual loss of their monetary hegemony by digitizing their fiat currencies.

Given the success of my last prediction, perhaps I’ll venture by making another one:

Walmart will not be the last company to embrace Bitcoin. Far from it. Companies will continue to flock to the flagship cryptocurrency and will stake out a small space of their own in Bitcoin’s growing network.

In fact, I’m confident that by the end of the current decade, there will be more people in the world who have heard of Bitcoin than who haven’t. While likely not all of them will have purchased or held onto Bitcoin, it’s certainly not hard to imagine that billions of them will.

Bitcoin is big. It’s going to get bigger.

Bitcoin Salaries: The idea of taking all or a portion of one’s wages in Bitcoin has hit the mainstream, with cities like Miami and companies like Twitter considering it. But what are the implications for the average worker? Read more

Corporate Crypto: MasterCard is doubling down on its support of Bitcoin and Cryptocurrency by allowing businesses and users to access digital wallets and earn crypto as rewards for purchases. Read more

Bitcoin Senator: Rand Paul, a Senator from the U.S. state of Kentucky, has openly wondered whether Bitcoin or another cryptocurrency could become the worlds reserve currency as people’s trust in governments is falling drastically. Read more

Inflation is bad, especially when it’s in someone else’s control, like a government or financial institution:

Bitcoin has a lot of value propositions. Combatting inflation is only one of them: