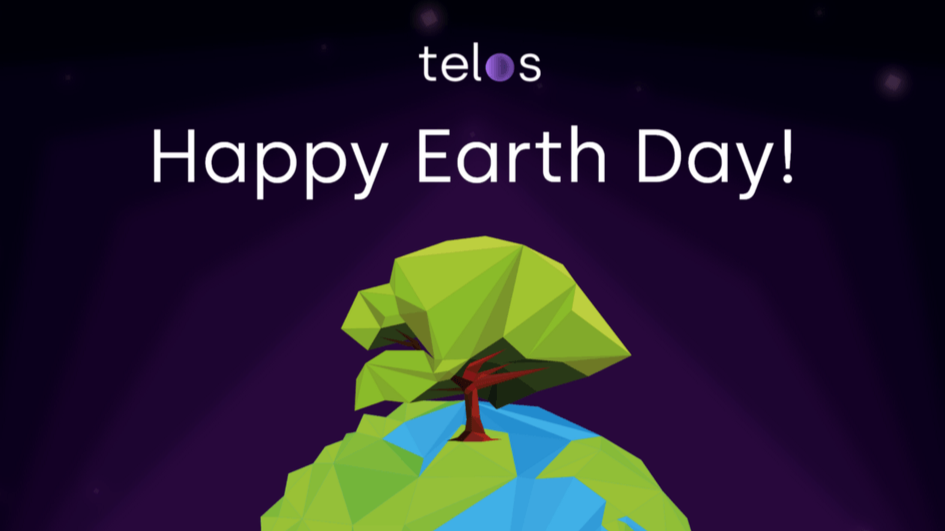 In The Celebration Of The Earth Day, Telos Also Announced That We Are Carbon-Neutral

At Telos, it’s always been our mission to create a blockchain that benefits the planet while empowering its users. As a result, we’re proud to announce that our blockchain is now carbon neutral!

This commitment is being fulfilled in the form of biochar, which sequesters carbon (removes it from the atmosphere permanently), rather than buying emission avoidance credits.

We’ve partnered with Plannet Zero, part of RedShaw Advisors Ltd, a leading carbon risk management firm. To do this, they’ve calculated our carbon footprint by analyzing the Telos blockchain’s energy consumption over the life of the chain. This analysis dates back to the first block ever generated in late 2018.

dApps now running on the tEVM will be running carbon neutral smart contracts by default. The same neutrality umbrellas over all the end-users minting and trading NFTs or coins on the Telos Blockchain. There is something bigger than all of us to be said about this achievement.

AJ Dinger, Head of Business Development at the Telos Foundation

We believe this is not just the right thing to do for Telos, but it’s what’s best for the planet. So we’re excited to be taking this step and will continue to look at ways we can positively impact both people and nature.

Just recently, Telos was featured again for the Nth time by Yahoo-Finance stating that "The blockchain's fastest EVM officially marked the end of carbon footprint this Earth Day".

This prestigious World-Finance medium of information acknowledges two great factors in one statement:

Telos is the fastest EVM and indeed Environmental compliant in all aspects! What more could you ask for?

During this Earth Day celebration, how many of the top chains according to marketcap has/have solidified their promise to the world that they really care for the planet? 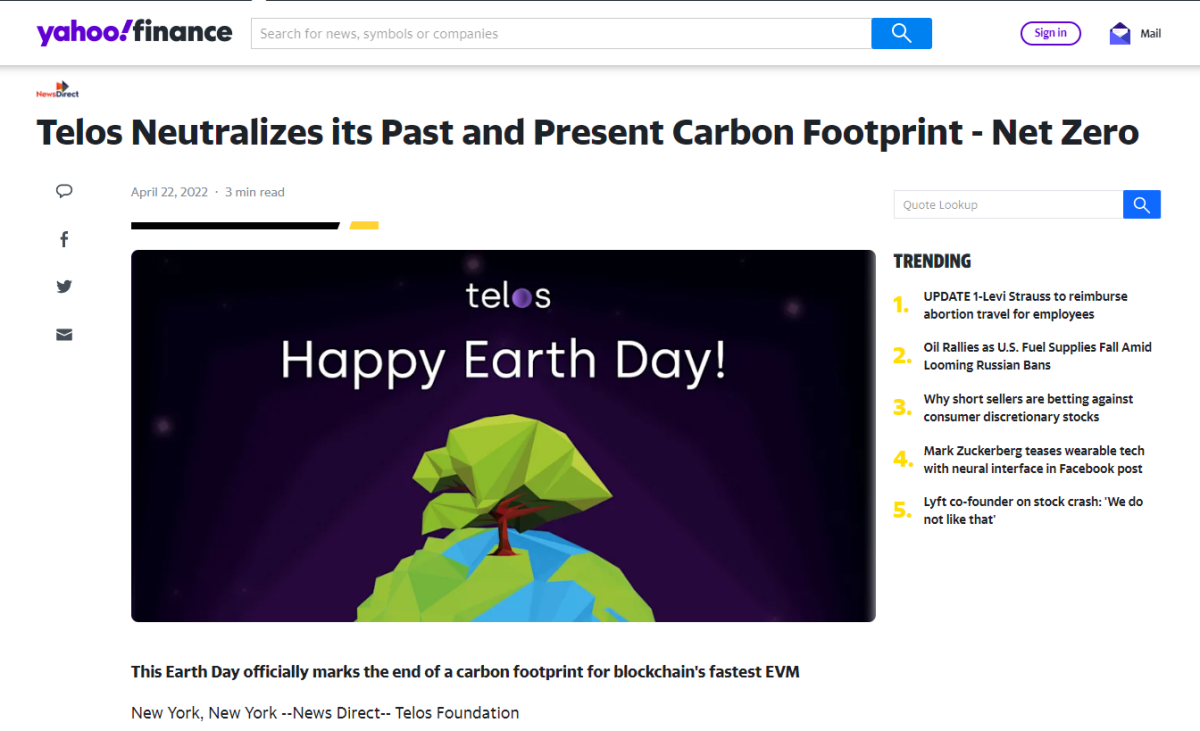 We can also take a look at this video that was featured by Cyberpump.net

This is the video created by one of the Telos Ambassadors (Eagle) BeeCeeBee.

If we are going to take a deeper check of how Telos is committed to becoming a totally Environmentally friendly technological industry, the blockchain is always opted to comply with the ESG-Standards.

Published by one of the Telos Ambassadors - Josh Ruiz

Bitcoin and Other Cryptocurrencies Are Incredibly Popular, But At What Cost? -- Let's Talk ESG

As cryptocurrency grabs headlines and gains more mainstream attention, many people are wondering what its environmental impact is. After all, bitcoin "mining" uses a lot of energy - isn't that bad for the planet?

All that computing power required for Bitcoin and other proof-of-work cryptocurrencies comes at a high environmental cost. Cryptocurrency mining is a process that requires an incredible amount of energy and is often sourced from polluting fossil fuels. In fact, it now uses more energy than some entire countries like Denmark! 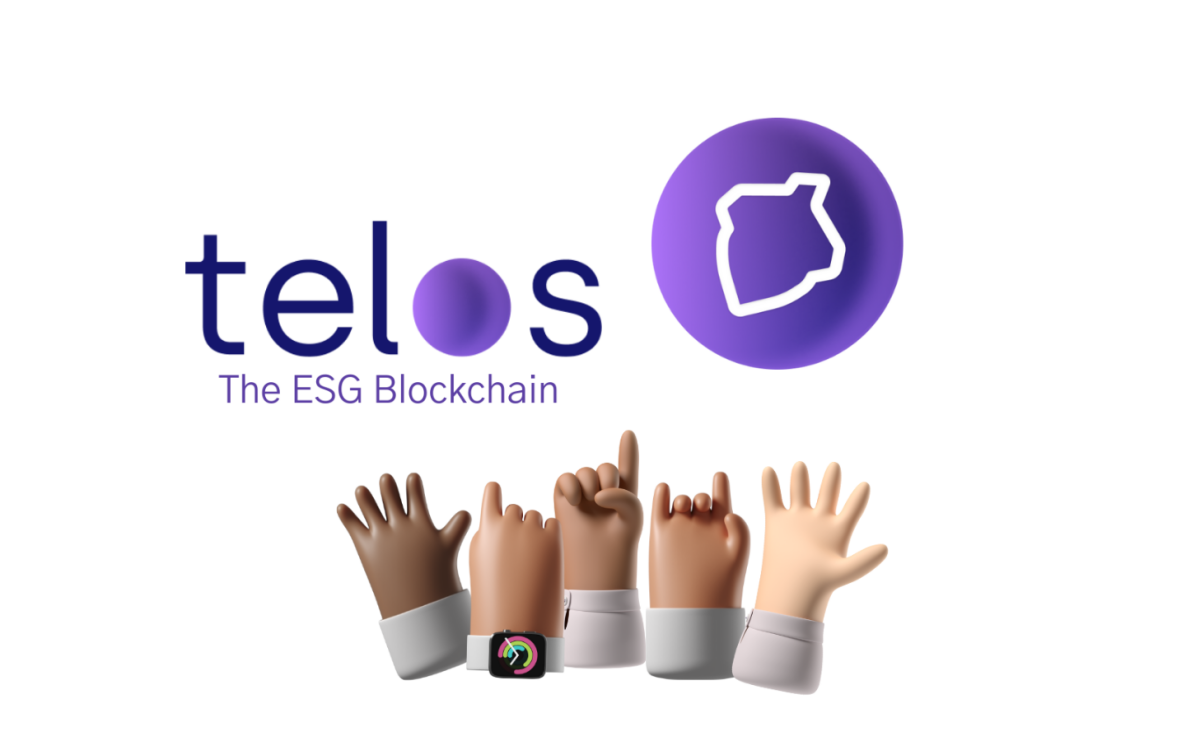 We need to find a way to make crypto more sustainable, or we'll be facing some serious environmental consequences.

Luckily, the world is changing and with it the way we view business. We're starting to see that taking care of our planet and our people is not only the right thing to do but also makes good financial sense. But there's still a lot of work to be done. Too many companies are focused on short-term profits without considering the long-term impact their decisions will have.

More and more people are looking to invest in businesses that have a positive impact on the environment and society. There are a lot of blockchains out there, and it can be hard to decide which one is right for you because not all blockchains are created equal, and some have more features than others. However, many of these projects find it difficult to get started or scale because they can't find a way to accurately track their ESG performance.

Telos is solving this problem by building the first blockchain specifically designed for ESG.

With Telos, projects will be able to easily track their environmental, social, and governance performance while also providing transparency to their investors. Telos is the perfect choice because this blockchain was built with mass adoption in mind, and we have a wide variety of features that make us stand out from the competition. We have an incredibly talented team of developers who are constantly working on innovations, and committed to making Telos the best blockchain possible.

What is ESG Investing and Why You Should Choose it?

ESG investing is an investment strategy that focuses on environmental, social, and governance factors in order to achieve a positive impact on society. ESG investing is often seen as a way to invest in companies that are making a positive difference in the world.

There are a lot of different ways to measure ESG performance, but one of the most popular is the Environmental, Social, and Governance (ESG) score. The ESG score is a way to measure a company's impact on the environment, social issues, and governance. The higher a company's ESG score, the more positive its impact is.

Telos as the Blockchain of Choice 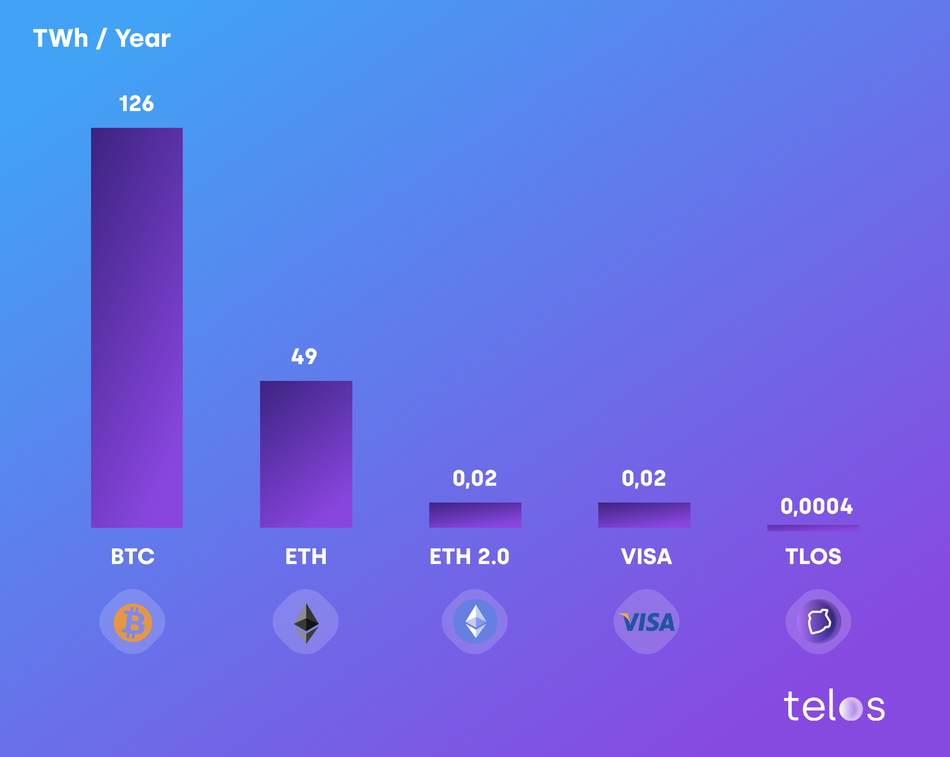 It could bring visibility to alignment with sustainability goals by enabling developers/builders to track data on projects that could potentially enhance awareness and access by acting as a transaction-enabling blockchain of new market models. The possibilities are endless!

This can incentivize visionaries and increase willingness and ability to contribute to building long-term sustainability like ReFi or DAOs, driving also changes within industries to adapt to the shifting demands of consumers.

The role of Telos in the context of sustainable projects is considered to be far beyond enabling efficient data collection/transfers and transactions.

The Telos technology can also potentially address the key challenges and opportunities in supporting mitigation and adaptation-related activities, especially in the energy, transport, and agriculture industries.

To end this post let me answer the question asked by the Telos CMO Paul Walton, how can I be a socially responsible community member?

Being a socially responsible community member starts with being informed about the issues that matter to you and taking action to make a difference. It's important to remember that every little bit counts and even the smallest actions can have a huge impact.

I intend to educate myself more about the Telos Ecosystem and stay up-to-date on the latest news, share my knowledge with others to help raise awareness and create an impact by encouraging other community members to be socially responsible too and make a difference in their own way.

Together, everyone achieves more!

Let me know your thoughts, does/do the blockchain(s) you support care(s) for mother nature? I hope yes!