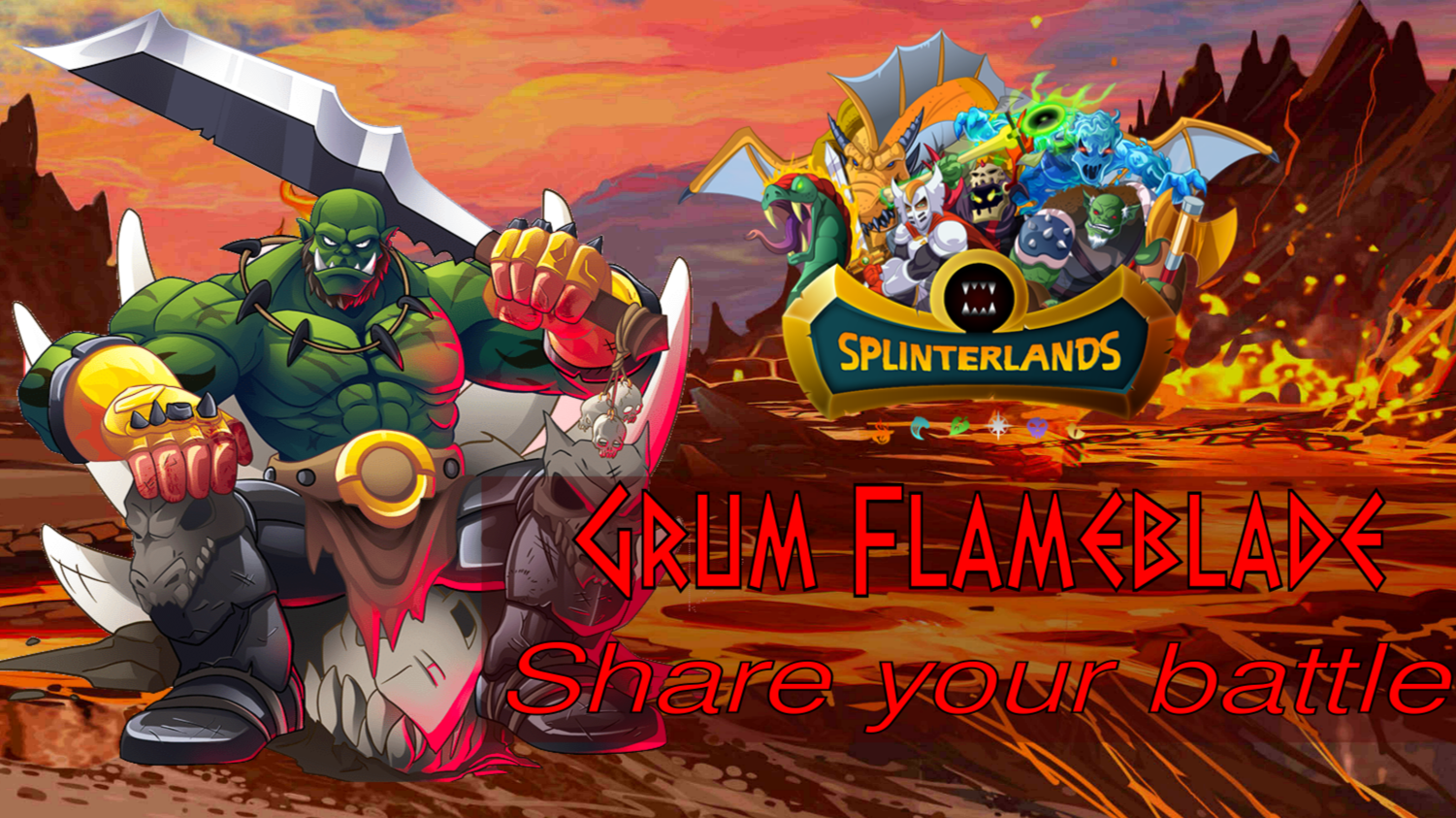 Wiping out the competition with Qid Yuff and Grum Flameblade

Hi splinterlanders! In this share you battle entry i took a dive in monster abilities and buff's beyond what the base cards have to offer. So let's have a look with at what the combination of "Piercing" (Qid Yuff) and "Bloodlust" (Grum Flameblade) can bring to the game. Enjoy! Qid Yuff is one of the most well known Trolls in the Burning Lands. Although he has never bothered to learn the common tongue, his skills of summoning are unmatched at Mount Mox. He uses ancient Troll methods that are unknown even to the Magi of the Forest, who invented modern essence summoning. When he summons, Qid becomes a mysterious whirlwind of scattered runes, bones, scrolls, blades and blood. The monsters he summons appear at the field with a relentless fervor and crazed looks in their eyes. Even the weakest of them can strike like the blow of a piercing lance, and Qid just watches the mayhem with a grin.

Grum is known throughout his tribe as the strongest warrior. Born in the Sands of Draykh-Nahka, his hard upbringing made him a survivor. There was no weather too extreme, no drought too long, and no enemy too cunning for Grum. He became well-respected within the region for his battle prowess and defended his tribe countless times against the creatures of the wastes. Tales were sung around the fires of Grum's battle with the Great Wyrm of the Sands, the Earth-Shaking Titan, and Velissa the Sorceress. Grum's tribe, known as the Desert Blood, honored tradition, strength, and courage. He grew to become a legend amongst his people. The piercing is great to use against shielded enemies. It damage the targets health if the damage done will exceed the targets armor. Bloodlust increases every stat the monster has by one on every kill it does. Void Armor makes sure magic damage will hit the monsters defense first, instead of bypassing the shield.

Armorded-up Will add 2 additional defense to all monsters

Spreading Fury will apply enrage to monsters when hit. This means its Speed and Melee attack value will be multiplied by 1.5 times.

I chose Grum Flameblade for this battle because, with the low mana cap in mind, my opponent would pick several low mana / low health monsters. And because of bloodlust and with a 4 melee attack this would mean Grum would be able to take out at least some monsters just by himself.

As a second line monster i picked Scorch Fiend because of it's 0 mana cost and as a distraction to keep opportunity monster away from the Serpentine Spy which a picked as a 3 line monster. For backing i added Radiated Scorcherer, to take a hit from sneak attacks and i only had 1 mana left to spent.

This line-up would leave room for my opponents to take out all of my monsters except the tank, and another weakness is that i only have 2 monsters capable of attacking simultaneously. So all of the weight would lean on Grum Flameblade.

Because of the Armored-up rule, all monsters started with shielding. And by the end of round 1 on my side the Radiated Sorcherer and Serpentine Spy where cleaned from this armor. On the other side, the Chaos agent lost it's armor, and the piercing ability not only took out the armor of my opponents Radiated Sorcherer, but even dealt damage.

Then in round 2, both of the Radiated Sorcherers would leave the battlefield. And unfortunately my Scorch Fiend would also end it's journey in this round. With only Grum and the Serpentine Spy left, my team entered round 3.

In round 3, my opponents finished of the Serpentine Spy, leaving only Grum Flameblade to end this battle. Grum depleted the shielding of Antoid Plantoon which paved to way to really damage it in the next round, but was also left without any shield.

Now here's where the fun started, and the enrage ability showed what it can do. After Grum Flameblade got hit by the Tenyii Striker, it's speed increased to 2, and it's attack to 6. Now it was able to do 3 damage to the shielded Antoid platoon.

After taking another hit, Grum only had 1 life left so i was real lucky it took a turn before my opponents next attack. Because it could now end Antoid Platoon, Bloodlust came into play, increasing Grum's speed to 3, attack to 8, and gained another shield and health. The shield blocked the last attack of this round.

In round 6 i got to attack first, and because of the piercing ability, Grum took out the Serpentine Spy in 1 attack, triggering another bloodlust increasing it's stats again.

With an attack of 9 in combination with Piercing, 1 attack was enough to end the Tenyii Striker. So despite i though i lost this battle when only Grum was left, it managed to take out my opponents complete team all on it's own.

Despite taken up almost all of the mana on it's own for this game, i think the combination of Piercing and Bloodlust work out great. Grum Flameblade is like a one man army and i think you can really use him in games with mana capped on 18 and above.

You should definitely rent him to see if it fits your style of game play, but i think he is well worth it's money.