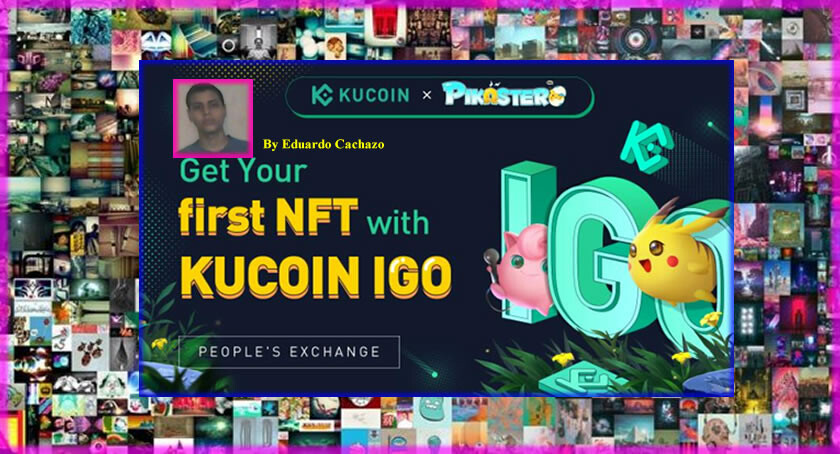 After the emergence of Bitcoin and with it that of alternative currencies, there are two key events that impacted the world of blockchain, undoubtedly are the emergence of smart contracts and the creation of NFT tokens, but what are the NFT?

NFT tokens are nothing more than cryptographic assets with the particularity that they are unique, they are based on uniqueness, i.e. they cannot be repeated, they cannot be copied, also called non-fungible tokens, they cannot be burned, once created to disappear the only way is to assign an unknown address and the token is lost, they cannot be exchanged in pairs as in a traditional trading, only one owner who can sell it to another person. They have gained great importance and value is according to the use case for which they are created, to give you an idea the background of my cover is a NFT token created by a digital designer Beeple, who for 13 years created a collage with all his digital arts, I shape them in a token called my first 5000 days, to astonishment this token was auctioned last year at almost 70 million dollars.

In video games take an importance because it lends itself to a whole trade with them, they can be elements of the game that come to have value according to their performance and also for their digital art. It is important to clarify the concept for people who have already heard about NFT and do not know what it is, but where to acquire them? For this we will talk about the KuCoin platform next.

I consider it appropriate to review without going into much detail about the benefits of this prestigious cryptocurrency exchange, so much so that last year Forbes magazine ranked it as one of the leading cryptocurrency exchanges and many call it "the exchange of people", also this year it received another recognition from the company The Ascent, which evaluates financial products, awarded it as the best cryptocurrency application, it is currently in the top 5 of the best exchanges,

Kucoin was founded 5 years ago, has grown exponentially and has more than 18 countries around the world with presence in South and Central America, Arab Emirates, Europe, India and Asian countries, supports more than 51 fiat currencies, you can find more than 600 cryptocurrencies and operate with more than 1170 pairs, high volume of capital which gives it great liquidity, maintains commissions to operate among the lowest in the market.

In its platform you have everything that both expert and novice users can do among other things; trading with the necessary tools, lending, staking, configuring boots, finding new promising cryptocurrencies and buying in pre-sale,

Let's take a look at some of its features:

Search for a cryptocurrency for tranding 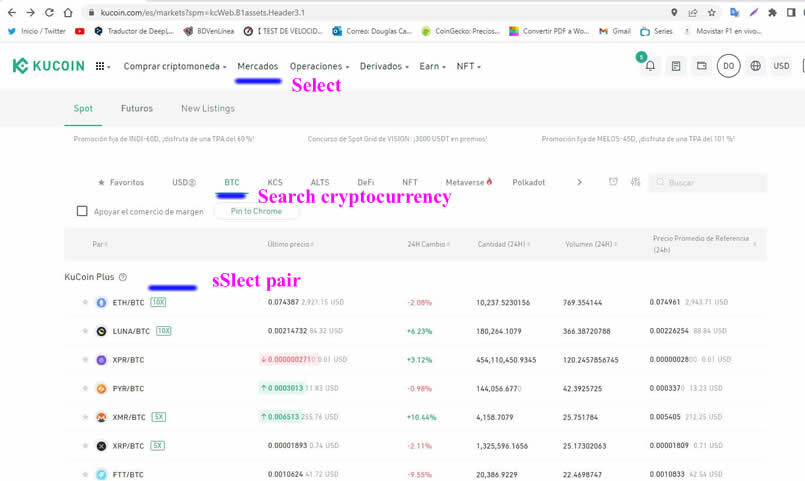 Select the pair to tranding for example BTC USDT 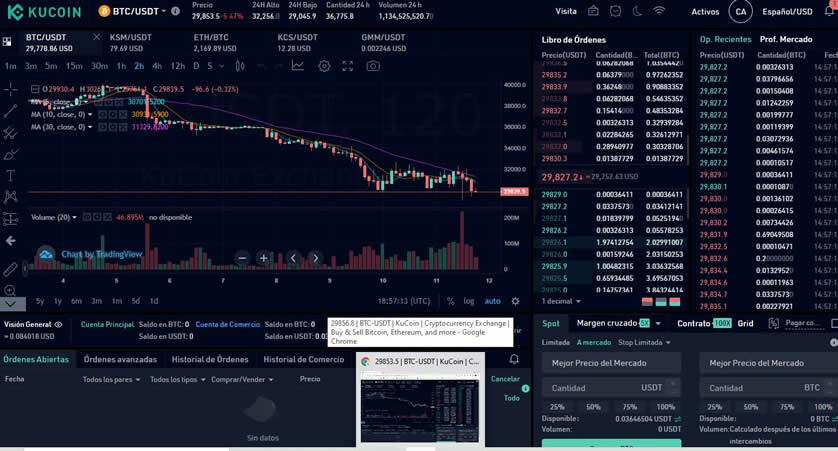 - Rethinking, hold a cryptocurrency for a time that could be 30 to 90 days and earn money for it, those blocked amounts are used to pay commissions to miners for validating transactions and also create new cryptocurrencies. 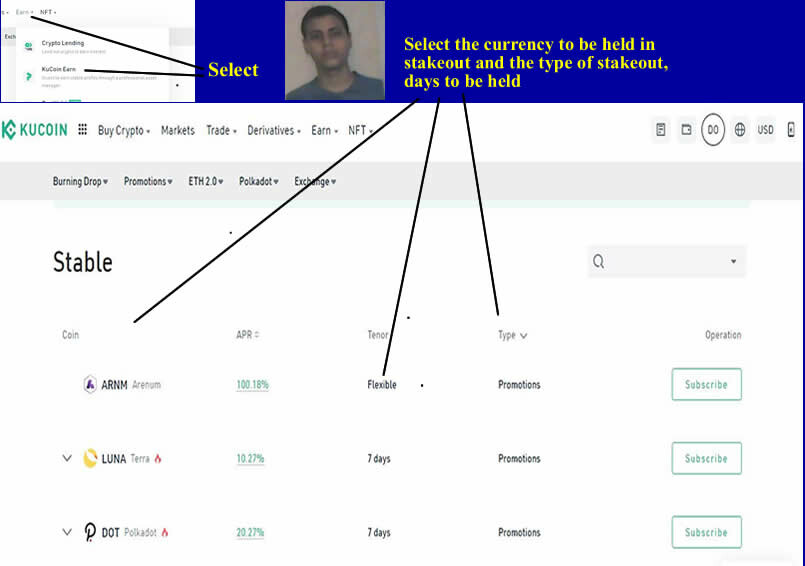 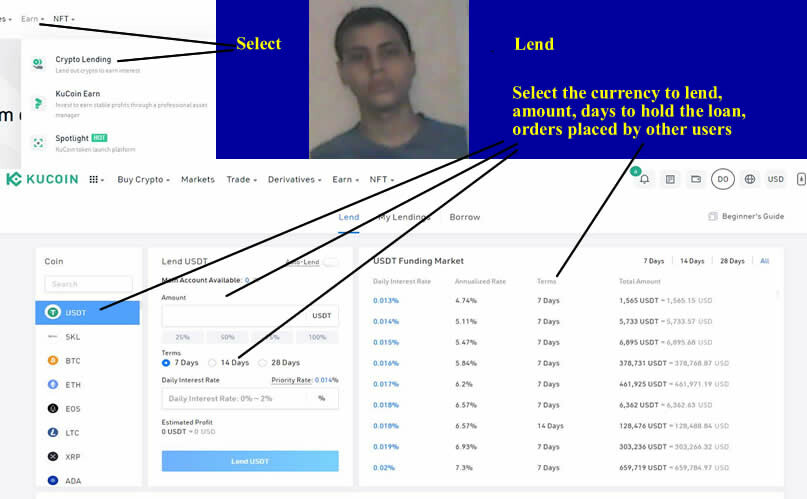 - Use bot for automatic trading, it is an option to configure bot and save you a lot of time and effort when trading. 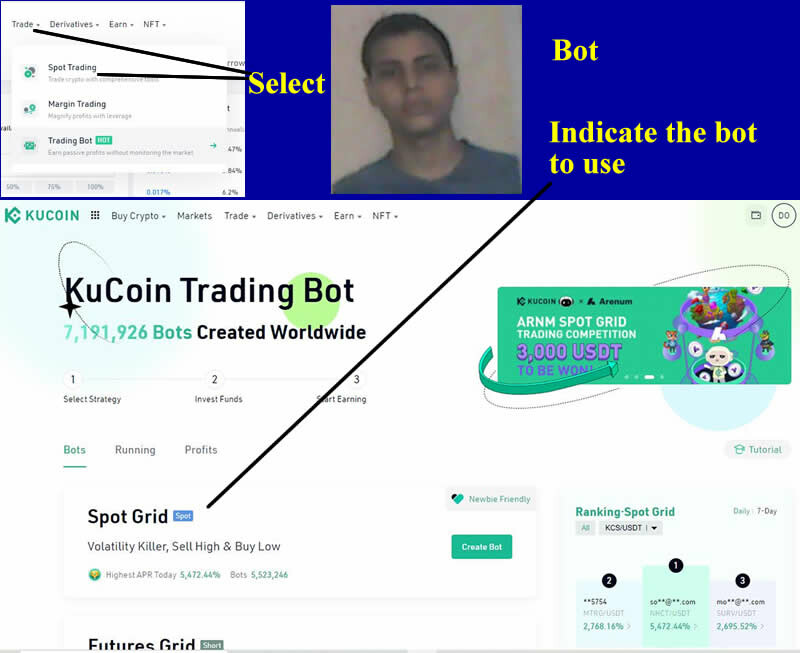 - One option I highly recommend is to hold a Kucoin token, KCS,

Buy cryptocurrencies from other users using P2P, person to person without intermediaries. 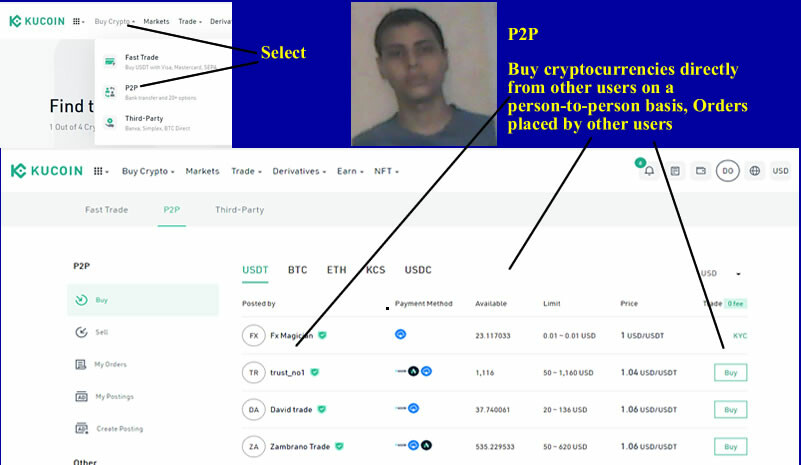 In short, all the above reasons serve as a basis for recommending Kucoin.

They call it the people's exchange for a reason.

Of course, to operate with Kucoin you must have a registered account, if you don't have one yet, here is my referral link so you can easily register.

Kucoin when you sign up with the referral system gives you benefits ranging from discounts on commissions to direct bonuses,

Before explaining how to trade on Kucoin Igo let's clarify some terms such as what is an IGO?  Some cryptographic projects before their entry on the scene make what is called an ICO, which is nothing more than an initial offering of their token of use, it is to obtain funds by selling the token at an attractive price, if the project is good successful and you bought their token in an ICO be assured that you will get good profit, similarly KuCoin launched this year its IGO product which is nothing more than an initial offering for the token of new generations of video games. If the game is launched on a Kucoin IGO you can be sure that you will be facing a good investment, you have to be attentive to the announcements in terms of IGo for new games to enter the public, since these new games will have the power of Kucoin by connecting it with its community. Users would be supporting the game long before its official release.

The Kucoin video games offered in IGO are exclusive, in the IGO you get game assets, characters, weapons in short any asset associated with the video game, the way to acquire could be through

KuCoin IGO. By participating by buying in advance you can have access to the assets of the game. Such as mystery boxes, characters, accessories needed for the game, weapons and other items.

How to enter the IGO offer 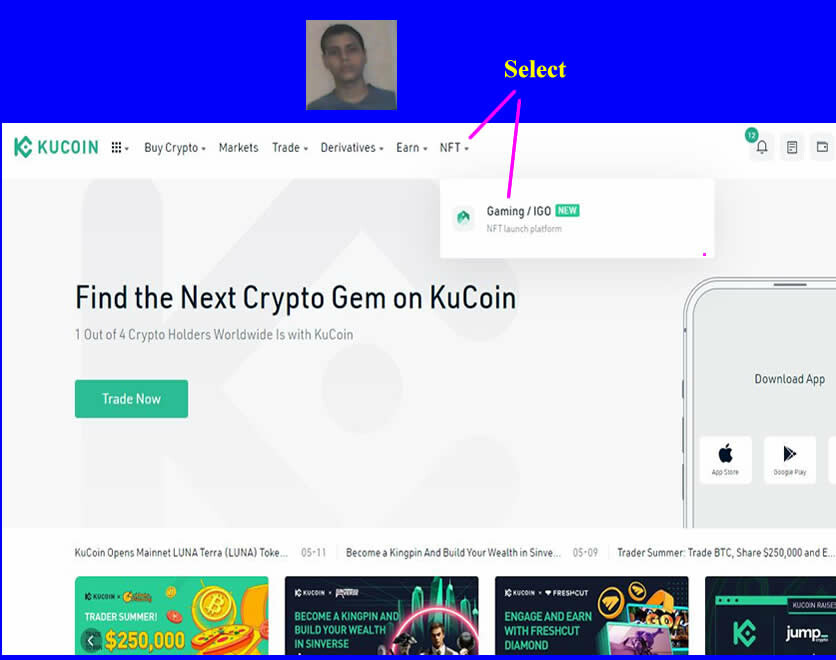 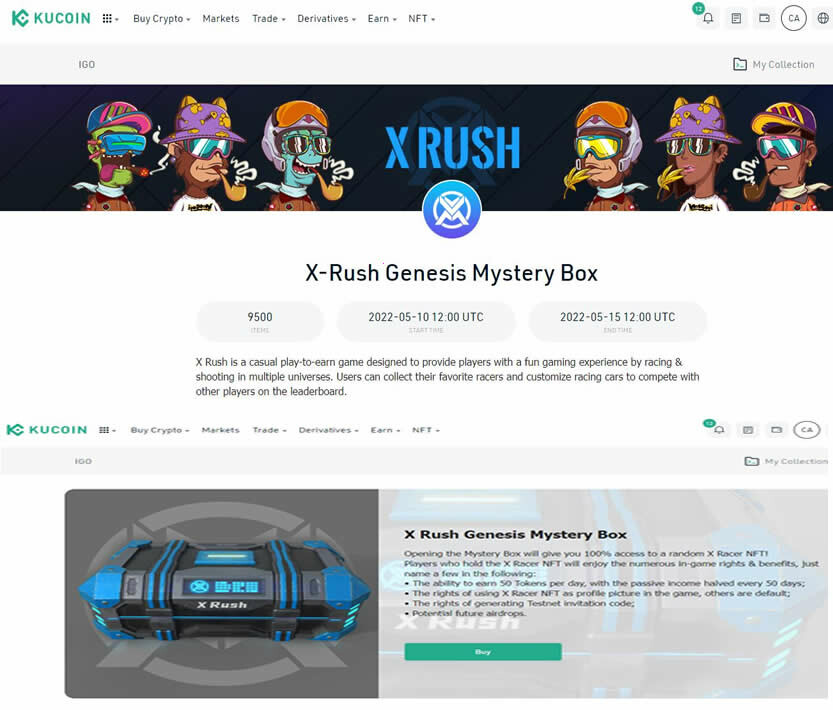 If you select buy, you can see a more detailed description of the product 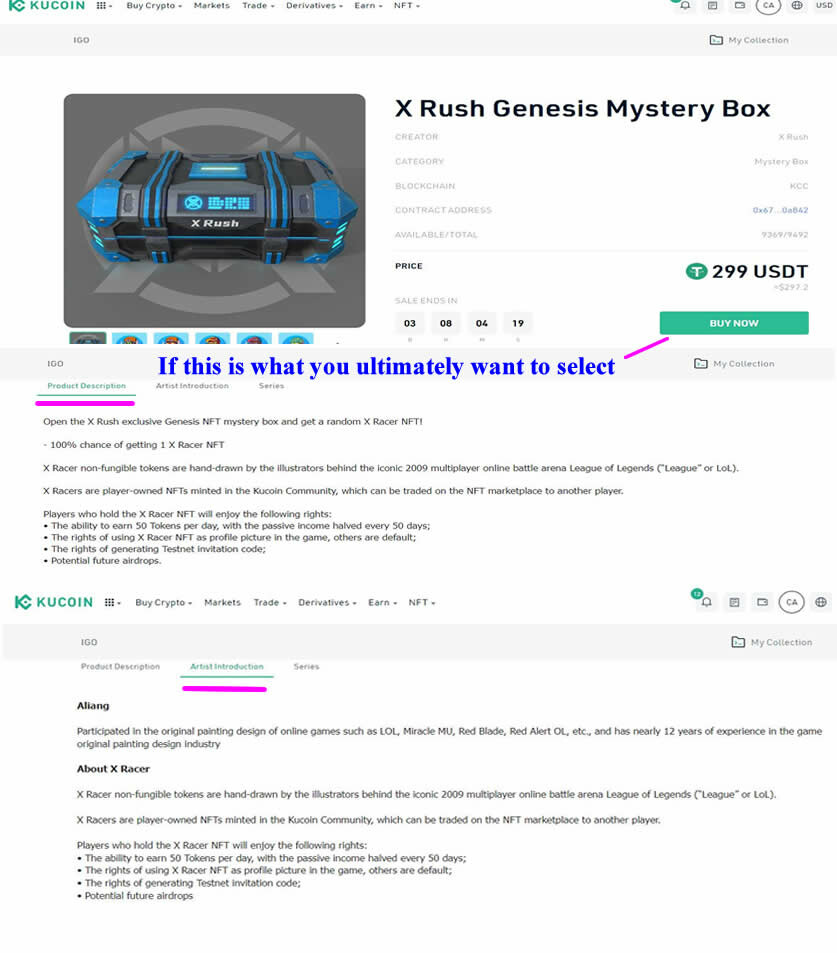 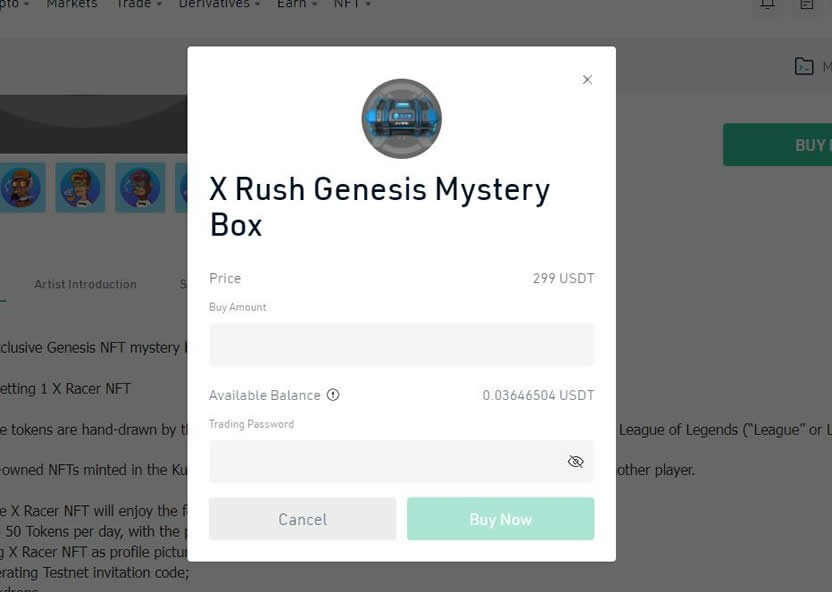 This is how easy it is to buy your NFT at IGO Kucoin.

As we could appreciate in this content we are facing a new product of the Kucoin exchange in which you can acquire assets embodied in NFT tokens of video games in advance of its official launch, this will give you an advantage if the game is ultimately successful, you will already have in your possession NFT that may end up being worth much more in the short term. The video games launched in the IGO are exclusive to the Kucoin platform,