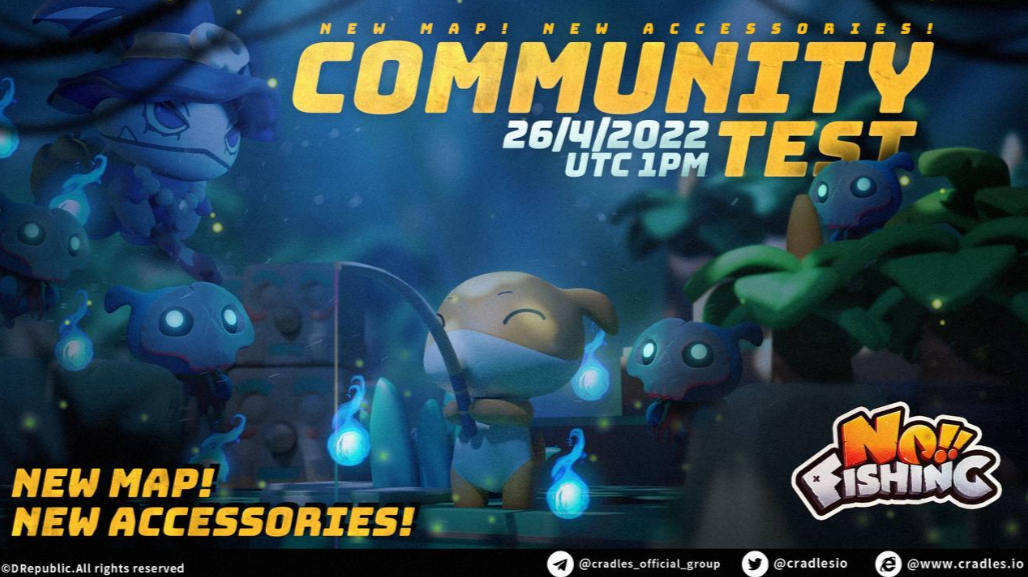 Dear Cradians, the No Fishing mini-game you’ve all been waiting for is almost here. But first, we would like to announce a new Community Test event!

As we inch ever closer to the No Fishing mini-game, we are now opening the beta version to our wonderful Cradles community so you can get a first-hand look at the first blockchain game to feature combinable component NFTs with the awesome power of the EIP3664 protocol!

The aim will be to let early testers try out the new game and test every single feature to identify gameplay improvements and bugs so we can ensure a smooth gaming experience for the actual game launch!

2. The best player during the test event will receive a Golden Ammonite + Invite to Cradles Elite (if they are not already in the Elite queue).

3. Bug bounties: The first player to properly report a valid bug in-game on Discord ( ☎️│#report-no-fishing-bugs channel) will receive a Dragontar for each validated bug reported.

What’s new in the No Fishing mini-game:

No Fishing is a multiplayer adversarial game developed by DRepublic Labs, where players take on the role of adorable Dragontars living on the Dragontar Planet. Fish are their favourite, so they do whatever it takes to fish on the planet, while Guardian Dragontars here will do their best to stop them.

Thus an interesting story unfolds. Who will be the best at overcoming obstacles and avoiding the Guardians? Join No Fishing now!

Here’s what’s waiting for you in the latest version of No Fishing:

The anglers are supposed to catch as many fish as possible before being caught by the lawmen.

Anglers can fish at lakes of different sizes on the map while using bushes and trees around the lakes to hide from lawmen. Anglers are equipped with the skill of temporary invisibility, while lawmen have the skills of acceleration and scanning the surroundings as both sides do their best to outsmart each other.

Players may trigger random events that make for a highly entertaining game.

What are you waiting for? Register for the No Fishing Community Test event and win awesome crypto and NFT prizes!

As always, feel free to reach out to us or join the conversation with Cradians on the following channels:

Cradles is the first time-lapsing metaverse game – a living, breathing virtual world that continues to evolve and progress, simulating the laws of time and physics just like in real life.