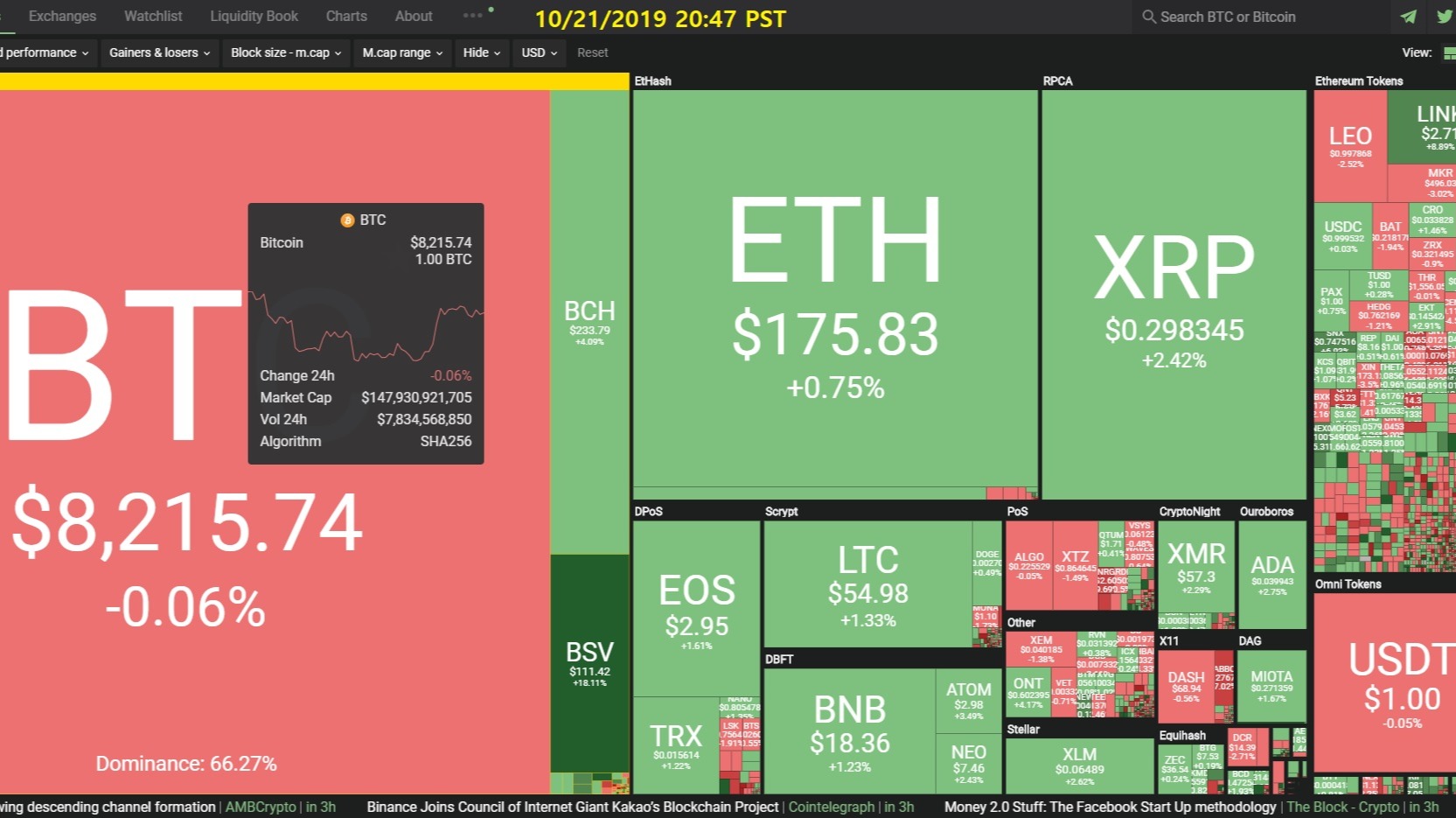 The global economy is on weak footing. This has led to rate cuts by several central banks across the world and many are planning to implement additional measures to support their respective economies. This has ballooned the balance sheets of the central banks and there appears to be no end in sight. Since mid-September, the Federal Reserve has resumed its bond buying initiative, leading its balance sheet to expand by $210 billion. The Fed’s balance sheet is now about $3.97 trillion.

CME launched its Bitcoin futures contracts in December 2017 and since then it has attracted a ton of institutional interest towards the Bitcoin derivatives market. Each CME contract consists of 5 BTC which is settled at the end of each month. The Bitcoin futures volume on CME is also a great indication of market sentiment as investors usually go short in a bear market and start hedging long in the bull market.

While the cryptocurrency segment remained bearish for the better part of the weekend, the major coins all rallied on Sunday in late trading. The news regarding the possible extension of the Brexit deadline was likely among the factors that stopped the bleeding in the segment, but the continued violent protests in Hong Kong also pushed supported especially the price of safe-haven BTC.

The price of bitcoin has been heading south over the past three months, but one quant analyst that goes by the name of PlanB on Medium predicts that the flagship cryptocurrency could surge in the coming days.

Reflecting on a week in which the 18 millionth bitcoin was mined at block 600,000, Binance upped the stakes by raising leverage on its futures trading platform to a staggering 125X, Telegram delayed the launch of its TON blockchain until April 2019 following US regulatory backlash, BAT-powered Brave browser hits 8 million monthly active users and ‘Satoshi’ was added to the Oxford English Dictionary.

You Can Now Pay with Bitcoin, Ethereum, or Litecoin on Amazon [u.today]

According to TechCrunch, the company with a flashy name has just released a browser extension that will allow making payments on the biggest e-commerce platform.  You can use any Bitcoin wallet with the Lightning Network support in order to make instantaneous transactions. For instance, Electrum, one of the most widely used Bitcoin wallets, now supports the popular off-chain scaling solution.

Stephen Moore has been vocal about his beliefs against the current Federal Reserve’s plans and interest rates raises. He’s a long-time television commentator on economic issues and a writer for several economic media outlets. Most recently, he has been commenting on the government monopoly on the U.S. dollar and launching a cryptocurrency stablecoin appears to be a logical step.

While Bitcoin has risen at its peak over 350% in 2019 from its bear market bottom, the crypto asset failed to breach above a local high of $14,000 and fell short of retesting its previous all-time high of $20,000. The failure by bulls to push Bitcoin higher and reignite the FOMO from the crypto hype bubble has caused fear to take hold of crypto investors who are worried the bear market bottom isn’t actually in, and new lows may be set.
One crypto analyst, says that not only could new lows below $3,000 be set, but that Bitcoin could fall another 90% to as low as $300.

David Marcus, co-founder and head of Libra, claimed that the project could use a series of stablecoins pegged to national currencies including the dollar, pound, euro and others. This approach could replace the previous plan of backing Libra with a basket of fiat currencies that included the U.S. dollar, euro, yen, British pound and Singapore dollar. However, Marcus only raised the new fiat model as a possibility without committing to it as Libra’s new preferred option.

The printing of more than 20 trillion dollars in cash by the Fed, as Winklevoss pointed out (apparently using older data from 2012), only increases the overall amount of dollars in the U.S. economy. The problem with this overzealous printing is that the economy has not kept pace with this level of monetary creation.

Banks in Europe are facing an existential threat that could soon spread to the U.S., particularly if Donald Trump gropes his way toward zero interest rates. There will be few who would feel any sympathy if banks do begin to collapse. And what’s more, the threats they face could finally turn the tides of favor among the general public from fiat to cryptocurrency, refugees of a failed experiment in ill-conceived monetary policy at the regulatory level.

Fidelity Digital Asset Services (FDAS) is “now engaged in a full rollout” of its custody and trading services, expanding from the limited trial users in the platform’s final test stage, according to a Financial Times interview. A spokesperson said Monday that FDAS’ license application with New York State is still pending while more clients are being added to test the platform. The business had initially been expected to be open in the first quarter of 2019.

Popular crypto exchange Binance which has been working on a fiat trading solution for its customers is finally ready to launch. To kick-start this innovation, the exchange will work with Russian rubles in the beginning phase. This interesting development was made public on Monday by Binance CEO, Changpeng Zhao, at the Open Innovations conference held in Moscow, Russia. He revealed that in the next two weeks the fiat trading option for Russian rubles should be available on the exchange, making it possible for customers to purchase digital assets using rubles.