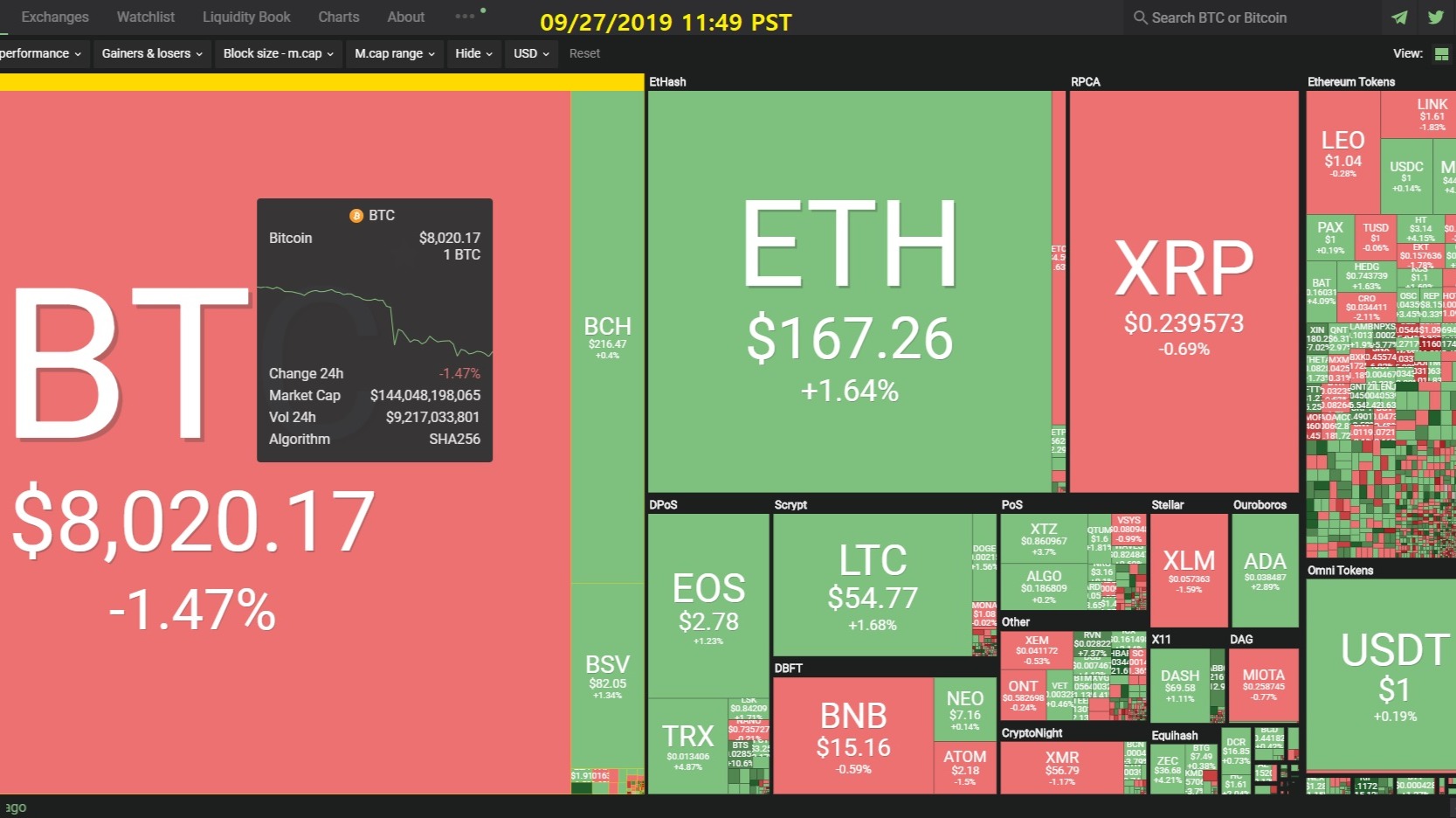 Volume similarities between the $6,000 breakdown and the recent drop point to a bigger issue than manipulation. | Source: TradingView

Bitcoin Hangs on $8,000 After Another Hit - Price Analysis [cryptoglobe.com]

Phase two of Bitcoin’s (BTC) capitulation has begun, as the leading crypto’s price claimed another leg to the downside last night (September 26). It would seem that a general downtrend is forming on the short to medium term, and the main question in the immediate future will be: where is the bottom?

The bitcoin price bloodbath which began on Tuesday (September 24, 2019) did see BTC drop from the mid-$9,000 to below $8,000 for the first time since June.
For Yusko, BTC at $5,000 still isn’t a signal to sell, instead, the investment manager said such a price level is a perfect buying opportunity.
According to Yusko, bitcoin as an asset is akin to Amazon shares. Commenting further, the Morgan Creek chief quipped:

Fear & Greed Index Drops to Extreme Fear in the Lead Up to Bitcoin Options Expiration [coin360.com]

Against the background of an abrupt Bitcoin price downfall, the Bitcoin Fear & Greed Index, which tracks sentiment among investors, has dropped to 12 yesterday and just slightly recovered to 24, thus indicating extreme concern.

After the Bitcoin price recorded a drop by 15 percent on Tuesday, two days after that it went 8 percent lower. Overall, after the first decrease, the BTC price dropped another 10 percent by today.
At press-time, the major cryptocurrency is trading slightly above $8,000.
Meanwhile, experts and community members on Crypto Twitter offer their reasons of the BTC price collapse. U.Today has brought them together in one article for you.

“It could be ‘selling the news’ on the launch of Bakkt, which has so far seen much lower than expected volumes of trading go through its platform following months of hype. It could also be in response to the rapid decline in Bitcoin’s hashrate (amount of computation in the system) though this now seems less likely as the hash rate has somewhat recovered.”

Bakkt, the Intercontinental Exchange’s crypto-brainchild, was slated to spur institutional Bitcoin markets with its flagship physically delivered Bitcoin Futures contracts, with the CME’s hold looking to slip and with it, their periodic push-and-pull of the market looked to decline.
From the perspective of institutions, investment, and price discovery, the hold of the CME was rung in the heads of Bitcoin proponents periodically at the expiry of every Futures contracts, which the sensitive cryptocurrency markets always seemed to respond to. Until last month.

Bitcoin hasn’t had the best of weeks. Since Sunday, the cryptocurrency has fallen in price by more than 20%. This move has left many traders stumped, wondering what in the world took place in the underlying market to send digital assets plummeting.
Cynics of the Bitcoin market have suggested that the rally to $14,000 and the subsequent dump was “one final pump and dump” enacted by whales so this subset could cash out these tokens.

Bitcoin Set For Boost As Deutsche Bank CEO Warns That Central Banks Are Running Out Of Ways To Prevent A Global Financial Crisis [zycrypto.com]

It has been no secret that central banks around the world are struggling to keep their economies going. As governments continue to find their way in what has been a deteriorating financial and geopolitical situation, it has become necessary for Central banks to implement every available tool and measure to ensure the economy does not go down. While so far, for many it seems to be working, Germany’s Deutsche CEO has warned that Central banks are running out of conventional ways to “cushion” the blow of a real economic crisis.

Binance.US volumes by market pair and by currency (Binance.US)

Binance to Launch Staking Service for Suite of Cryptocurrencies [btcmanager.com]

Binance has formally announced they will launch a staking service for networks such as NEO, Ontology, Stellar Lumens, and Komodo, September 26, 2019. Staking has been gaining an increasing amount of attention of late as more and more network look at Proof of Stake (PoS) as a replacement for consensus through the energy-intensive Proof of Work (PoW).

According to a study carried by the analytical company MarketsandMarkets, the blockchain device market will grow on average by 42.5% per year and will reach $1.29 billion by 2024.
Researchers evaluated the prospects for various blockchain devices:
smartphones;
cryptomats;
terminals
hardware cryptocurrency wallets;
and various wearable electronics.

Binance just revealed that their crypto staking platform is live. Initially, it will support 8 assets: NEO, ONT, VET, XLM, KMD, ALGO, QTUM, and STRAT. With Staking, Binance users will be able to grow their funds by receiving monthly rewards & distributions simply by depositing and holding funds on Binance. Users will earn staking rewards without needing to set up any nodes, worry about minimum staking amounts, time lengths, or any other technical requirements.