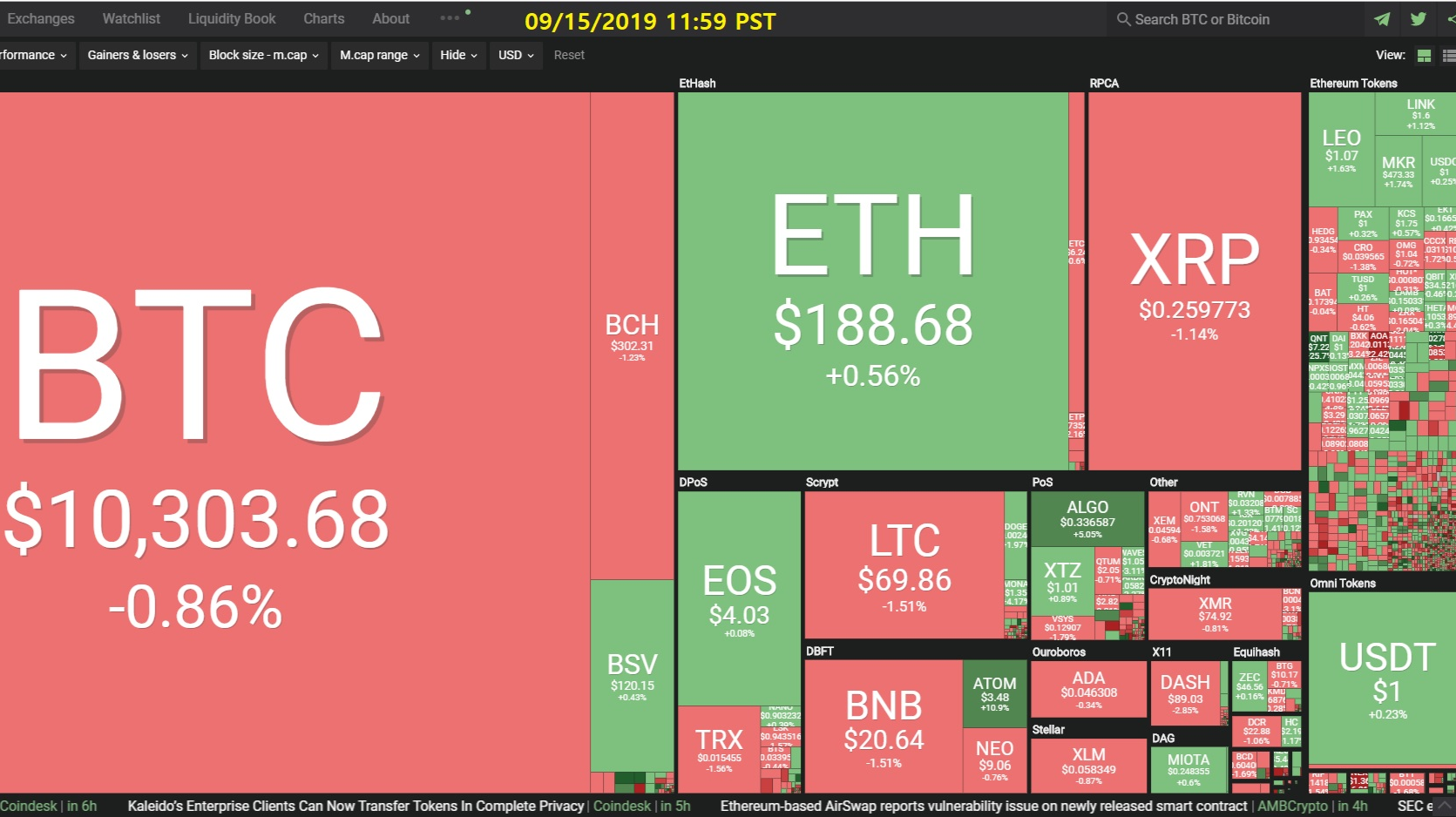 Facebook’s Libra continues to face opposition from lawmakers and central banks around the world. French Finance Minister Bruno Le Maire said that Europe should consider a European public digital currency to counter the Libra. German Christian Democratic Union parliamentarian Thomas Heilmann said that the grand coalition in Germany has agreed that it will not allow “market-relevant private stablecoins.”

There was a downside correction from the $10,954 swing high in bitcoin price against the US Dollar.
The price is holding the $10,000 support and it could bounce back in the near term.
There is a major bullish trend line forming with support near $10,140 on the 4-hours chart of the BTC/USD pair (data feed from Kraken).
The price could dip in the short term before it starts a fresh increase above $10,500 in the near term.

One of the largest points of contention in the Bitcoin community surrounds the question of block sizes. Larger blocks mean faster transactions and less congestion, but they have higher requirements in storage and bandwidth.

The communities behind Bitcoin and its forks are currently debating whether large blocks are truly feasible, and there is very little agreement on the matter. In fact, the Bitcoin blockchain has literally been split over this issue multiple times. Here’s a closer look at the ongoing block size debate.

Bitcoin, Stocks, Or Precious Metals: Which Turns The Most Profit? [thebitcoinnews.com]

Bitcoin’s strong and stable performances in 2019 have been undeniable. As the cryptocurrency’s returns continue to outperform gains seen in traditional market stalwarts (i.e. gold, silver, and the S&P 500), many traders are making comparisons to its relative strength within the market.

Speaking to BlockTV, Draper described his famous $250,000 bitcoin price forecast as being conservative. According to Draper:
$250,000 means that bitcoin would then have about a 5% market share of the currency world and I think that may be understating the power of bitcoin.

While strategists generally remain bullish on the short to medium-term trend of the U.S. equities market given the progress in the trade deal talks between the U.S. and China, there are variables that could interfere with its upside movement. On September 14, Mike Pompeo, the secretary of state of the United States, stated that the government of Iran initiated an attack on Saudi Arabia’s oil plants, affecting nearly 5% of the daily output of the global oil sector and increasing more uncertainty in the global stock market.

The largest cryptocurrency by market cap, Bitcoin is scheduled to undergo its third halving in May 2020. Many from the community speculate an increase in the value of the king coin’s price. Regardless of the surge in the price, the stock-to-flow ratio of Bitcoin will certainly rise pushing it closer to that of gold.

Bitcoin expert, Plan B discussed the same in Preston Pysh’s podcast and suggested that the halving would double the stock-to-flow ratio further increasing the value of the digital gold.

Bitcoin’s wild price swings are probably the biggest impediment to mainstream adoption. Many expect BTC to become more stable as it gradually matures, but that not might be the case.

In her latest op-ed article, CoinDesk’s Director of Research Noelle Acheson argues that Bitcoin volatility will not dampen even with an increase in liquidity.

While citing Mervyn King’s book “The End of Alchemy,” she argues that it’s all about the narrative surrounding Bitcoin rather its pure fundamentals.

AirSwap, a peer-to-peer token trading network built on Ethereum, has disclosed that it has found a critical vulnerability in its newly released smart contract. Under certain conditions, the vulnerability would allow an attacker to perform a token swap without requiring a counterparty to sign off on the trade.

In our examination of modern monetary systems and economies, it’s worth taking some time to examine the most prominent approaches, at least in the last century, to solving the problems of economic incentives.
Capitalism and communism stand in stark contrast to each other as the most clear examples of the extremes of the economic spectrum; from a decentralized system of free trade to one that is deeply centralized, being directly controlled by a collection of governing powers.

Browser extensions can help scammers steal your crypto Casa CEO Jeremy Welch warned the audience at the Baltic Honeybadger conference in Riga this weekend.
“Browser extensions impose major risks, and these risks haven’t been discussed until this point,” Welch said.
Extensions can gather a wealth of data, which can be leaked, stolen, and used by scammers. One example is browser history, which can expose users’ online habits, including crypto-related site visits.
“Make sure you don’t expose your bitcoin addresses anywhere,” Welch warned.

You Can Soon Start Earning BTT and USDT for Seeing Ads on TRON TV [cryptoglobe.com]

Sun tweeted out a link to TRON TV last week, telling TRX users to join “millions of other viewers.” TRON’s founder also said that the platform would be adding licensed content in the near future, in addition to the recently announced feature to pay users for viewing advertisements.

“BTCPay represents everything we love about open-source bitcoin projects. It exemplifies the ideals of our community and promotes adoption by letting merchants accept bitcoin, control their private keys, and self-validate their coins. It also creates powerful real world applications for bitcoin without sacrificing user experience or requiring trusted third parties.”

Of late, there have been lots of talks about XRP being adopted by banks and how this could play out in the crypto’s favor. In fact, Ripple has made huge strides in its efforts to get as many banks as possible to adopt XRP.

However, it seems that the apparent support that banks have expressed for XRP may not be the real deal. For one, the main reason that most banks are working with Ripple is to utilize its new and innovative payment solutions like xCurrent.