Dissolution Game is aiming to create an ultimate gaming experiance in the Science fiction
world MMORPG with realistic economy backed by the Blockchain.

Yes you readed it right in "with Blockchain"

That means that you owns your assets , lets say you bought guns and you want to send it to a friend
that just started to play so he can join you in harder map , you just send them the item.
With blockchain integration you can decide to give bonus to whoever is having a certain asset.
Lets say the founder token here by example in Dissolution The "DFT" is granting you lots of bonus,
and its an asset on the blockchain of Enjin as Etherium Enjin can also have assets token. but lets be realistic the
Enjin Blockchain is lots faster so its better for a true gaming experience , maybe that why dissolution went with them.

you as a owner of the DFT gonna be able to loan  the DFT for in-game  money , and charge a fee on their bonus they earn.
because the Dev know you have a Day job , they know you need to sleep ...
so that why you can generate passive income while your not in front of your computer.
for all the bonus i will get back to you in the next post
But just good to know that with 300 of them you got 300% your reward at the end of the match.
there is a supply of 100k of these so grab yours if the game reach 100k players everyone will have maximum 1 !

Enough said about assets and blockchain for now I will continue on next post I what to give a global feedback too.

I am personally pretty addicted to the version they left us to play with during the time they continue developing the game.
its an FPS version with already 3 different mode : Against Zombies waves, Control the objective Against flying machines bots, and control the objective in RAID that would be player vs player when enough player will reach the pre-alpha, but for now there is human bots playing HEHE.


these are all the primary weapons you gonna get to unlock at the moment :) the Type77 is really good in the zombie mode
the Origin is kinda sniper weapon
Evryones knows what is a Vec-45, hehe but its a fast weapon short range usualy
the MGL-62 is the grenade luncher, MAR-4 is a Dope assault gun that have the 3round burst in it.
The scorpion is a good gun against thoses flyings machines in the 2th mode of game.
The Defender is a Shotgun pretty effective in close range, do I really have to specify Hahaha 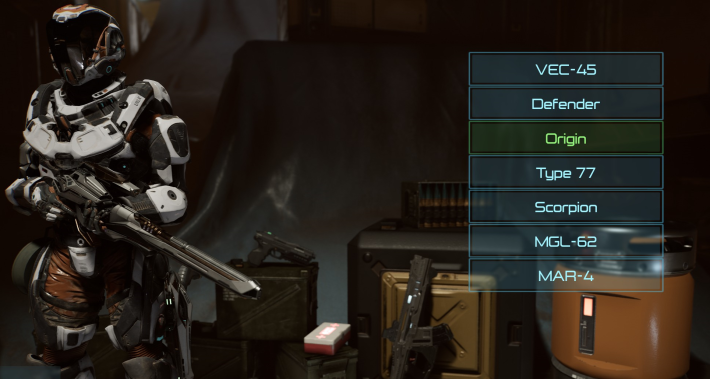 and leave a comment here if you are interested to try it out with some friends or becoming one of mine :)
so we can play together.


Maybee I can add one little thing , this game is in Pre-Alpha need to take care of buggs but they left
us a version to play with during trhe developement and i think thats really awsome.

Feal free to join the discord to speak with the DEV and tell them your feedback, its really appreciated.
and they answer pretty quick, if you tag them it's even quicker. DiscordDissolutionGame


And the same for the Telegram, Dev are hanging there ofthen.
they will appreciate the feedback.    Telegram Of Dissolution Game

For the last part I created a group on steam, cuse thats where the game is in pre-alpha.
if you whant to join i will create a corporation in the game when the time will come.
group Steam For the Borg Corpotration and his allies

-Sincerly one of the biggest fan of Dissolution Game

crypto enthousiast for gaming project on the blockchain

Dissolution Game is aiming to create an ultimate gaming experiance in the Science fiction world MMORPG with realistic economy backed by the Blockchain. Team up with friend and explore this universe beafore evryones else in open pré-Alpha stage.