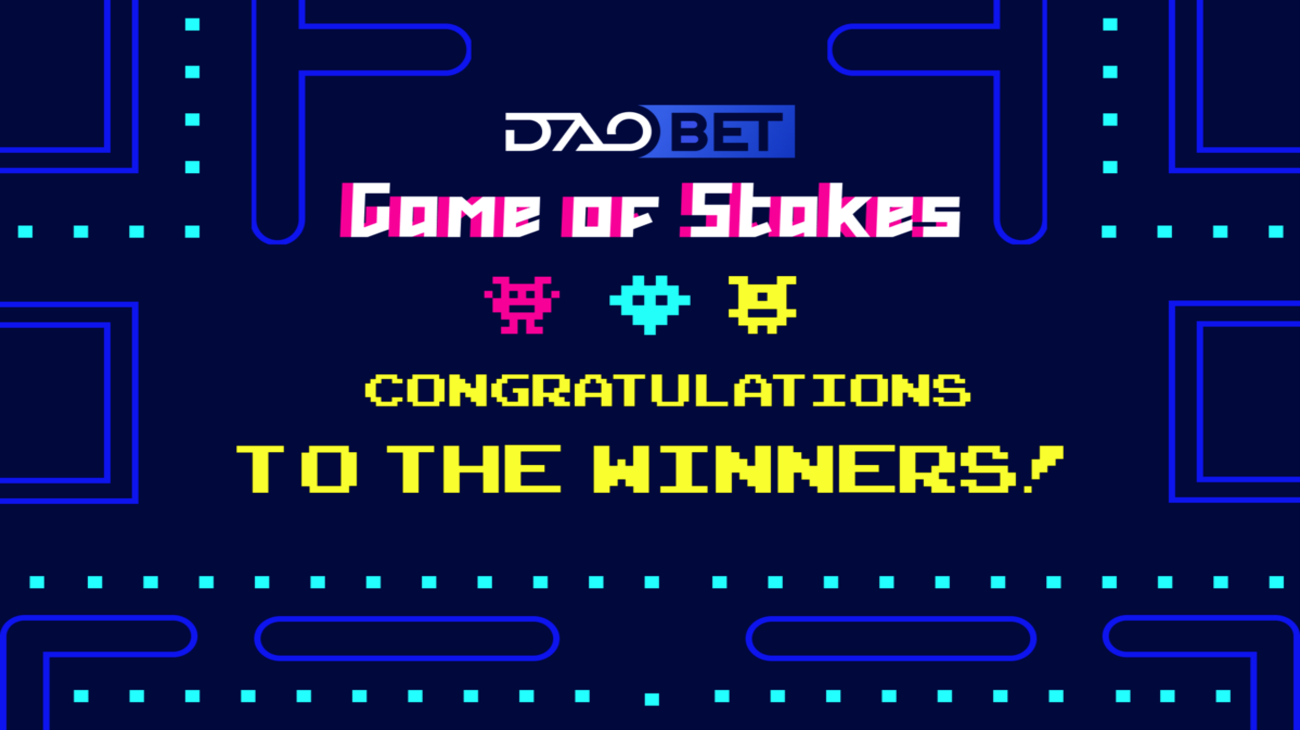 Game of Stakes has come to an end, and we asked the winners and the participants of DAOBet’s Game of Stakes a few questions concerning their impressions about the event.

We are delighted to announce our finalists!

What are your impressions upon DAOBet’s Game of Stakes?

It is very pleasant to hear such warm words from EOS Rio - the winners of Game of Stakes. DAOBet is also excited concerning the upcoming launch of the mainnet. More news upon that will arrive earlier one could expect!

DAOBet's GoS was a great, fun and innovative way of testing the network. I really appreciated the way that it was conducted by the organization and the way that the participants, even though they were competing, helped each other by aiming for getting the best out of the network.

DAOBet's GoS was a great event to test and promote the technology. It also helped to improve the knowledge in operating this technology.

DAOBet seemed like an interesting gambling platform. A betting platform built with BFT made it a fairly fast and stable blockchain.

Contrary to our concerns, we were surprised by the large number of participants. Also, the participation of big validator companies was amazing.

What were the difficulties you met, and how did you overcome them?

The container setup caused compatibility issues with some cloud providers, so it was required to build from scratch.

We have looked into the smart contracts of many blockchain gambling platforms in the past, and most of them were built on EOS. The biggest concern for smart contract developers is that it takes a long time to achieve finality on the EOS blockchain. However, DAOBet solves this problem with its BFT consensus. There weren’t that many difficulties as everything was fairly straightforward. The node installation process was easy, and the DAOBet developers were very responsive.

There was no guide on how to fix the segfault. Though we managed to do it. The solution is:

What did you enjoy most in Game of Stakes?

What I really enjoyed in GoS was that we had the chance to compete with great validators and learn a lot about the DAOBet. I'm really happy to help the project test its usability.

The possibility to see that all the time and efforts invested in GoS have finally been honored. Stay tuned for more opinions of Game of Stakes validators and followers!

What we enjoyed most in Game of Stakes was that everyone was able to get the opportunity to learn more about DAOBet and participate in the process of finding vulnerabilities and possible attack vectors. The same goes for our past experience in participating in the Cosmos Game of Stakes. We feel that an incentivized testnet like this is one of the most important steps a project can take before launching mainnet. It helps strengthen the project’s security, usability, and overall features, and also helps community members get up to speed on the details of the network.

We enjoyed learning about operating and maintaining EOS-based nodes.

One of the most important factors that decides whether or not a project will succeed is its ability to gain traction and attract developers to build applications on top of the platform. We hope that DAOBet finds ways to collaborate with good back-end and front-end developers to provide usability and accessibility to users at its early stage.

DAOBet team is very grateful to all the validators and followers of Game of Stakes for participation and sharing the feedback. We’ll be happy to meet everyone in the upcoming MainNet!