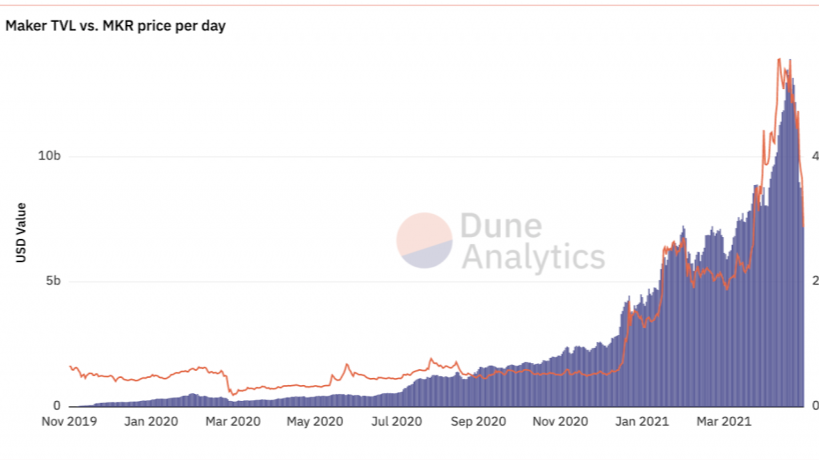 Maker (MKR) Has Been Unseated as the Top DeFi Project... But Is It As Strong as Ever?! 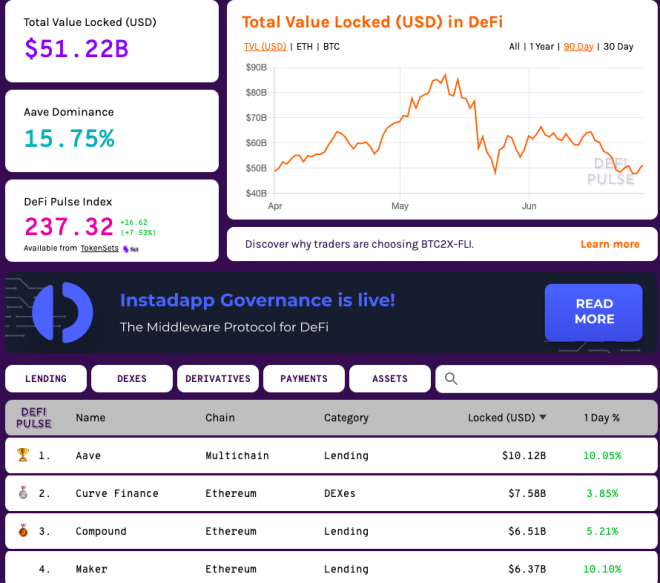 Maker (MKR) is the governance token of the MakerDAO and Maker Protocol— a DAO and a software platform, respectively. Both are based on the Ethereum blockchain— which allows users to issue and manage the Dai stablecoin. Initially conceived in 2015 and fully launched in December 2017, Maker is a project with the task of operating Dai, a community-managed decentralized cryptocurrency with a stable value soft-pegged to the US dollar. MKR tokens act as a kind of voting share for the organization that manages Dai. While Maker does not pay dividends to its holders, it does give the holders voting rights over the development of Maker Protocol.

MKR is an ERC-20 token, meaning that it runs on and is secured by the Ethereum blockchain. Ethereum, in turn, is secured by its Ethash proof-of-work function and is subject to the gas fees of the Ethereum network. As of Q2 2021, ~3% of the ETH supply is locked up in Maker.

From the origination of the Maker project, the first iteration of Dai was known as Single Collateral Dai (SCD) because it had only one asset serving as collateral, Ether. SCD was launched in December 2017 and served as the only widespread stablecoin alternative to the “usual” company-backed stablecoin projects like USDT and USDC. Dai’s decentralized, permissionless features allowed it to become an integral piece of the Decentralized Finance (DeFi) ecosystem, the industry that seeks to build decentralized financial products on top of smart contract-enabled blockchains, eliminating middlemen and rent-seeking entities.

In November 2019, MakerDAO upgraded the protocol to transition from Single Collateral Dai (SCD) to Multi Collateral Dai (MCD) by adding Basic Attention Token (BAT) as additional collateral outside of just Ether. Since then, Maker has added more custodial/less decentralized assets like USDC, WBTC, TUSD, PAX, and USDT.  Additionally, the Maker community rolled out other important protocol changes like the introduction of the Dai Savings Rate (DSR) which allows Dai holders to earn yield. Dai holders can also deposit Dai into other DeFi loan dApps to earn yield. DeFi Score by Codefi, lists Dai yields as high as ~18%. However, DeFi rates are typically highly variable based on current liquidity and demand, with historical rates much closer to ~5%.

A comparison of DeFi "blue chips" and their market cap to revenue ratio. MKR remains comparable to peers in this regard with SNX being the outlier. Image credit: Block49Capital


A significant milestone for MKR holders, Maker finally began raising interest rates away from zero in Q3 2020, translating to significant returns for MKR holders. Annualized earnings to MKR holders topped $27 million and in 2021 saw even more dramatic growth with projected annual returns of ~$200 million if all parameters remained steady throughout the remainder of the year.

MakerDAO hopes to create both a reliable stablecoin in Dai and a system of fair credit for everyone with the inclusion of MKR. Unlike other cryptocurrencies, MKR does not have a max token supply, predictable issuance schedule, nor “halving” event. The total supply is variable and dependent upon adoption and the amount of Dai loans issued.

Dai is rarely worth exactly $1 – it typically hovers between $0.98 and $1.02. Instead of mining, it’s issued by purchasing a collateralized debt position (CDP), Maker’s smart contracts that act as a loan. Once the loan is paid off (along with MKR fees), the Dai is destroyed as the smart contract is fulfilled.

To purchase the Dai stablecoin, you need to convert your ETH to wrapped Ethereum (W-ETH). This is how decentralized exchanges like 0x enable exchanges between ETH and tokens on the Ethereum blockchain. As of Q2 2021, there are ~4.5 billion Dai in circulation. Stablecoins saw an incredible rise in 2020-21 on Ethereum and Dai was no exception. Tether’s USDT token settled $580 billion on Ethereum, Circle’s USDC stablecoin settled $239 billion on Ethereum, and Dai came in third settling $98 billion. Throughout 2020, DAI increased its market share in the stablecoin market. DAI supply increased at a compound monthly growth rate (CMGR) of 33%, while the overall stablecoin market increased only at a CMGR of 17%. This led to DAI’s market share increasing from 3% to 7%. DAI also has the highest velocity of all stablecoins, in part due to its smaller size.

Converting between MKR, Dai, and ETH is done on Oasis Direct, MakerDAO’s decentralized token exchange platform that also supports other ERC20 tokens on the Ethereum blockchain. Other exchanges like Radar Relay, HitBTC, Kyber, and Ethfinex also support Dai and MKR, and over $1 million worth of each is traded daily. Maker recently announced a partnership with AirSwap DEX, too.

DAI’s on-chain transfer value, a proxy for usage, began to take off in Q3 2020 with the rise of Decentralized Finance (DeFi) on Ethereum. Increased supply (discussed above) coupled with increased stability (discussed in Use Case) and transfer value create a flywheel effect that builds upon one another and gives the market confidence in DAI as a real dollar alternative.

MakerDAO creates Dai using Vault/CDP smart contracts to collateralize the assets. This means it’s backed by ETH instead of fiat currency and the CDPs ensure there’s always enough ETH assets on hand to cover the Dai supply. Essentially, CDP contracts hold ETH, and if a black swan event occurs such as ETH crashing before anyone has a chance to react, MKR is liquidated on the open market to cover the losses.

Such an event happened on March 13, 2020, dubbed “Black Thursday” discussed in further detail in the Vulnerabilities section. Afterward, Maker added USDC as another collateral type to try and become less dependent on ETH and its volatility. This allows the protocol to re-collateralize, increase Dai supply, and improve arbitrage incentives. After USDC, Maker added even more custodial/less decentralized assets like WBTC, TUSD, PAX, and USDT. Custodial assets represent about one-third of MakerDAO’s collateral base. This creates an issue within the Dai ecosystem. If Dai’s primary value proposition is that it’s permissionless and decentralized unlike USDC, USDT, etc. then adding centralized assets erodes some of Dai’s appeal.