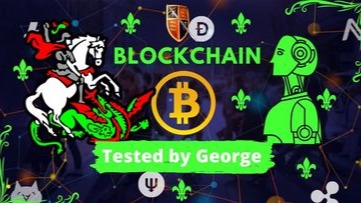 Splinterlands is a card game, similar with Hearthstone, where you can play battle against other players to get a better rank or in tournaments. It is a NFT game based on Hive Blockchain, with multiple ways to capitalise and make money, real money, by playing it or trading in it. You can start earning as soon as you buy a Spellbook ($10) getting DEC tokens and NFT monster cards via daily quests and season quests (every 2 weeks). There is an airdrop daily, for a whole year, currently at day 312/365, I think, and you can still get some nice governance tokens just by playing the game for the next few months. Everything counts, cards, DEC on HIVE, WAX, ETH and BSC, lands, titles, skins. You can maximize the airdrop by staking all you SPS for a 51% APR right now. Holy Molly! This is up from the 48% last week, and I think a lot of people stacked back after the validators bid. I got one, and all the licences from the pre-sale were sold in 12 minutes. You can buy one in the Tranche 1, paying $3000 in SPS. You can get it much cheaper (around $1300) if you buy 1000 Vouchers and use them to buy a licence. Another way to make profit is to rent cards, getting paid in DEC tokens for it. But, my, oh my, the renting price right now is so, so low. Check the contest at the end of this post! We can buy still Chaos Legion packs with 4$, using just Credits. Even then, if you want to get the extra packs, you still need vouchers, but just for the bonus packs. An awesome hint from a really good player (not me), if you open your packs after the Legendary summoners are introduced, you have a small chance to get them from the packs. It was announced that Lands NFT and Riftwatchers pack are coming in the third quarter now, with the new Roadmap proposed by Splinterlands. Just check this awesome page about what are the Lands supposed to do. 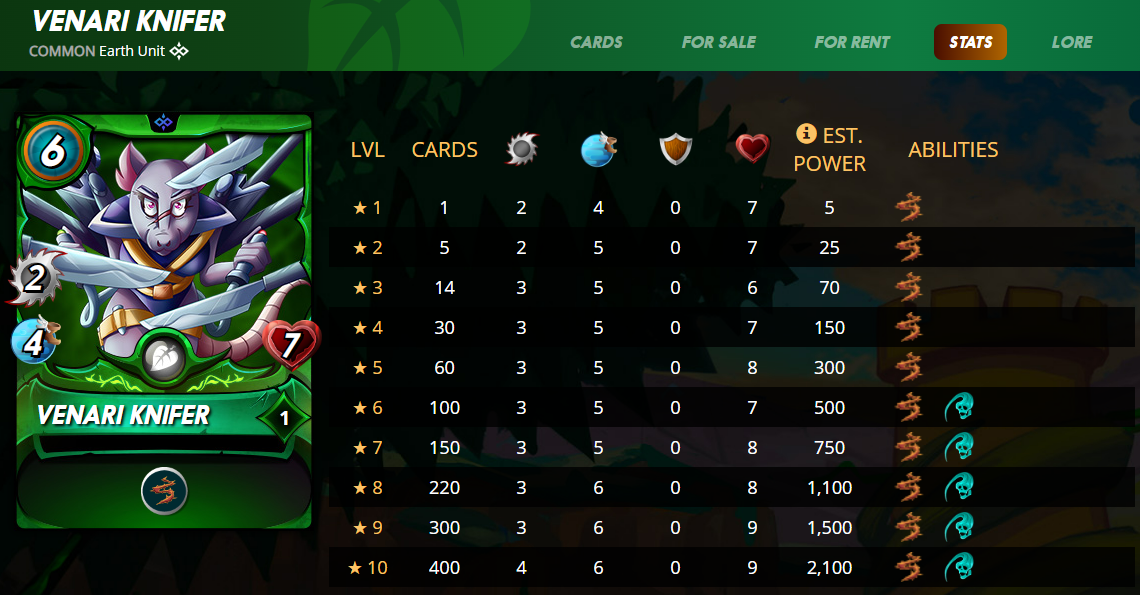 The Venari Knifer is a Common Earth splinter unit, with 4 Melee Damage, 6 Speed and 9 health at max level, with Thorns skill from level 1, and Backfire on level 6, doing damage to its attackers either by returning damage, or backfiring for 2 damage if they miss. While is not a great tank, for a 6 Mana cost, the Knifer can still be great as the last card, especially on rulesets adding Sneak or Opportunity, aswell as on the Melee Mayhem, where the monsters can attack from any position. Using a summoner as Daria, to add +1 to its Attack, can make it quite dangerous. 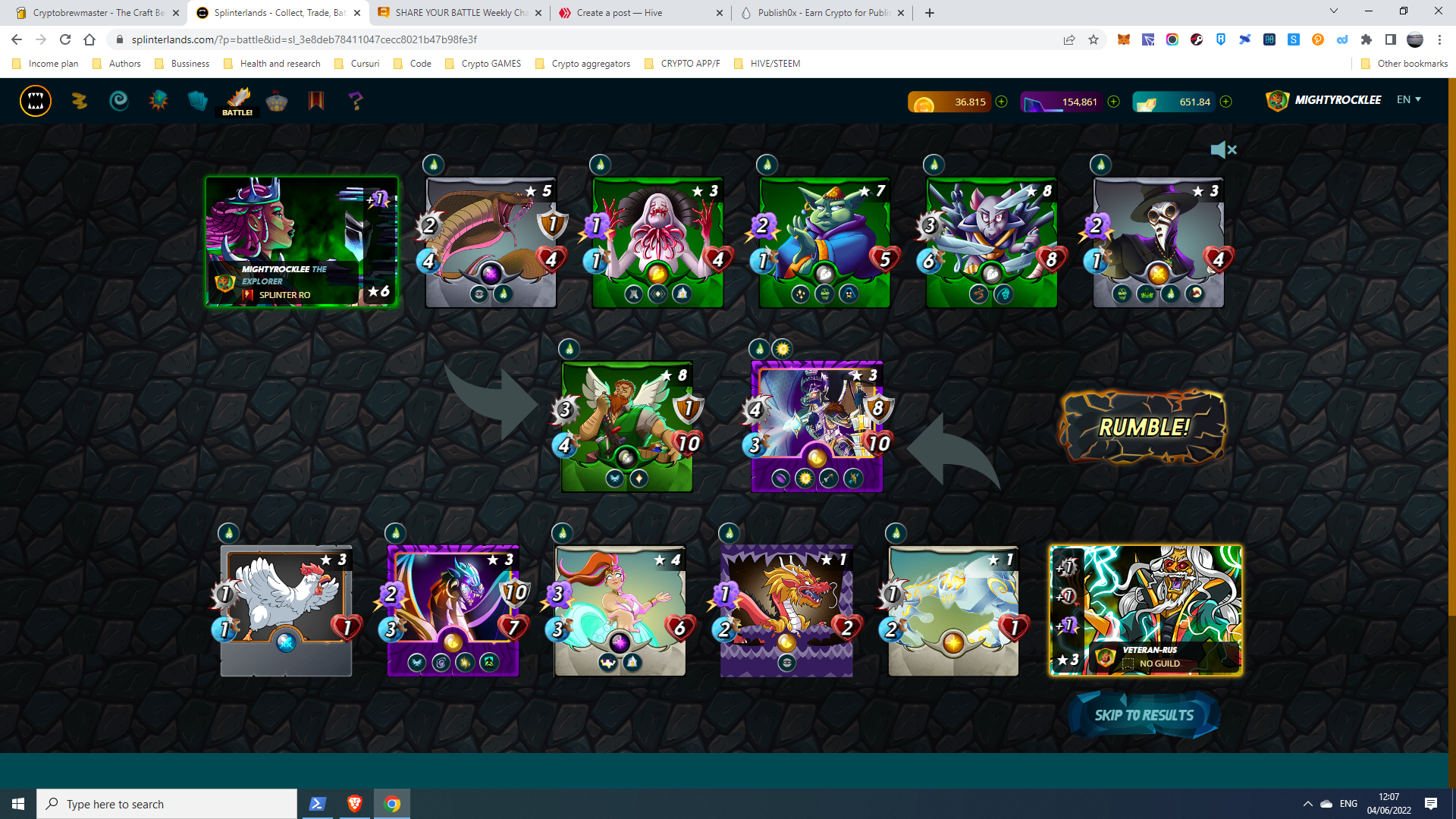 Rulesets: Noxious Fumes (all monsters are poisoned) and Stampede (Trample can be triggered over and over again)

Mine - Summoner: Obsidian, boosting Magic by 1, with the Pelacor Mercenary as main tank with Flying and Heal, Uraeus second using Sneak and Poison (he got Cleanse after all), Queen Mycellia adding 2 Armor to all, Amplifying the Knifer Thorns and healing the back line with Triage, Goblin Psychic healing the tank, decreasing Magic and using Affliction against Healing, Venari Knifer on the last position returning damage using Thorns, and Doctor Blight, hidden, using Affliction, Poison and Scavenger to keep itself alive.

This was a interesting battle, and his Fiend and Chicked died first, as intended, deflecting some of my attacks, followed by my tank and his tank in the second round. After that I lost 3 cards in a row, Mycellia to poison, Uraeus in front and the Psychic on the back. For a moment I was thinking that the game is lost, but I somehow managed to get Shin-Lo and the Knifer killed Renova right before dying in front of the Diamond Dragon. Once again, I was in trouble, as the Dragon activated Last Stand getting +50% to all stats. Lucky for me, I won, despite his 5 Magic Damage, with Doctor Blight shouting victorious with 1 Health left. What a game!

Star of the game - The one and only, Doctor Blight On the side note, my continuous support for Splintertalk.io is going well, with my SPT tokens number raising over 1 million. All of it is delegated to @monster-curator, as this account is doing a great work curating the best posts on the forum. I have finally reached the needed SPT power (110K at the moment) to manually curate on Splinterlalk.io. Also, working on acquiring 50K Oneup (18000 UP now) next, inspired by the Cartel efforts. Bought 200K Level too, for PsiberX airdrop, as I also managed to round up 100 Hive to buy a piece of Land in their game. Got 3 PsyberX packs already on airdrop in the last 2 months. Happy to have them!

Also, if you are posting on Publish0x and Read.cash blogs, and you liked the Chifibots game mentioned in the latest OneUp Cartel posts, there are still 4 prizes to be won if you want to get some of their NFT packs on this contest, open until the day they launch.